Alandra Hileman is about to reveal personal secrets that will probably make her unemployable.

The title of this column comes from a sort of unofficial but universally understood rule of stage managers, the concept being this: in the event that, on the way to the theatre, you are hit by a bus and can no longer run the show, your master book and all your paperwork should be in such good order that anyone else with a basic understanding of the backstage side of things could come in, pick up your book, and run the show. Obviously, there is no one standard way to create a call book or issue a rehearsal report, but however you do it specific to your company/show/personality should follow enough of the universal language of stage management that another stage manager could figure it out in a pinch.

I am terrible at this.

When I first really started stage managing in school, I went full out: digitized script (separate from my blocking script) with typed in cues, color coded highlighting (carefully chosen to still be visible and readable under blue booth lights), set-up/take-down checklists typed in triplicate and posted by all the doorways. I really took the spirit of the “hit by a bus” rule to my little type-A anal-retentive heart, and I was determined to be the best of the best and turn myself into an unstoppable force of stage management.

And this is what my call-book for the shows I’m currently running looks like right now: 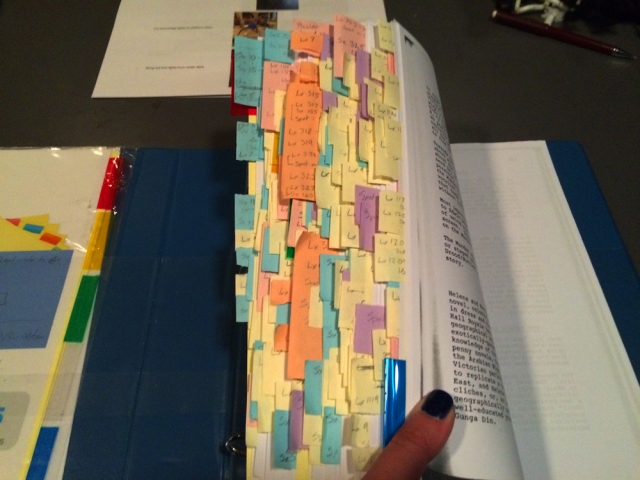 I have a somewhat synesthesia-eqsue association between colors and cue types that usually changes on a show-by-show basis. This time around, yellow is lighting, blue is sound, green is naptime, and so on. You’ll notice which color ISN’T featured in the photo above.

Anyway, the Post-It notes were only supposed to be a temporary solution because we were writing cues into my book in little bits and snatches of whatever available time we had (including at 1am in the hotel lobby the night before the sound designer had to catch a 6am flight – 0/10 do not recommend). I kept trying to block off time to write things in properly…and then it was opening night. So, I just started calling the shows from my “temporary” notes.

So at this point, we just finished week 4 of 6, and I’m terrified that my visual-recall memory would be MORE screwed up by trying to write my book out properly now that I’m used to where on the page to look for cues in any given scene. So, I’ve decided to leave it be and just pray that none of my commutes go viciously awry in the vicinity of CDL-only vehicles. To be fair, I have a really good sense of it at this point – I know not only what the color-coding system is, but the exact scenes where it’s wrong (because I ran out of yellow). I’ve moved things as blocking changed (MOVE DOWNSTAGE DAMMIT) and when cues got cut because they were unnecessary, I got to just pop the Post-It off the to the trash. And I pity my crew members every time they ask if they can look something up, because these are the shenanigans they have to deal with.

This decline and fall of my fictional stage managerial empire, in a terribly cliché and slightly forced-sounding way, is pretty much the perfect parallel for the rest of my general life-crises. The incredibly logical and organized life-plan I had all the way back in high school has pretty well devolved into a chaotic mess of events that constantly get rearranged, are frequently unintelligible to anyone but me, and are often bizarrely and specifically color-coded. And, just like my cue book, I’m hoping I can get it in order before someone drops it and it implodes in a flutter of tiny colorful squares and tears.

But at least it would be a colorful apocalypse.