No real topic this week, but, rather a story. A tale from my misspent youth. If you want to see a larger moral in it, such is your right. None is intended.

On Facebook the other day (and don’t too many stories start that way?), someone in one of the groups of which I’m a member posted photos of her trip to Grauman’s Chinese Theatre in Hollywood. It was apparently her first trip to the theatre, so I gave her a brief summary of its recent history (mainly the renovations it’s received). I concluded by saying “Remind me to tell you about the time I almost burned the joint down.” She hasn’t, but I figured this would be a good a time as any to immortalize that evening.

As I may have mentioned on more than one occasion, I grew up in Southern California, and while (once I was able to drive) a trip to Hollywood became an, at least, weekly occurrence, in the mid- and late ’60s, it was a rare treat.

When I was a kid, there were any number of movie theatres in Hollywood, most of which were first-run and reasonably glamorous, and (for the bigger houses like the Chinese, the Egyptian, the Cinerama Dome, or the Pantages) featured reserved seating for road-show presentations. You cut a coupon out of the paper (remember newspapers?), fill it out specifying a number of dates, and mail it in (remember mail?). After a couple of weeks, you’d get your tickets in the mail, and on the appointed night, turn up at the theatre, where the friendly uniformed usher (remember uniformed ushers? No … ?) would escort you to your seats.

I have five early moviegoing memories. The earliest would be in the late 50s on Long Island, seeing 101 Dalmatians at a theatre that combined a drive-in and a walk-in the same location. I remember spending most of the evening running inside and outside, comparing what part of the movie was playing on which screen. (These were, of course, the days when parents could let their kids run wild in outdoor public places and reasonably expect they’d be safe and back when it was time to head home.

You wonder why I turned out the way I did?

The second was a 1961 screening of Snow White and the Three Stooges. I was only five or so, but remember thinking it wasn’t very funny. (I love the Stooges, but this was not one of their finer efforts.) 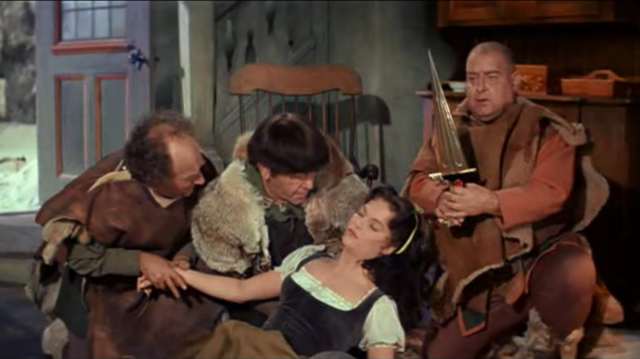 Yeah, pretty much what you’d expect.

The third was later in ’61, not long before we moved to California. My parents took my sister and me into Manhattan so they could see Andy Griffith and Debbie Reynolds in The Second Time Around. It was at the Paramount Theatre in Times Square, a theatre that seated nearly 3,700 people and had (in memory) about 20 balconies. As with the Disney movie, though, I spent most of the evening running around and looking out at Times Square. I remember the billboards for Camel cigarettes (which featured a man blowing actual smoke rings) and Kleenex (with Little Lulu shilling for facial tissues) far better than I remember the movie itself. (Which, despite my love of old movies, I haven’t seen since.)

Is it any wonder I didn’t care about the movie?

The scene shifts to California. One of my favorite movies to this day is It’s a Mad, Mad, Mad, Mad World, which was (and is) an epic comedy that featured virtually every comic actor working in Hollywood in the early ‘60s. Many people I know love this movie. Many people I know hate this movie. There seems to be no middle ground. Unfortunately, it had the bad luck to open just about two weeks before President Kennedy was assassinated, and the country really wasn’t in a mood to watch a four-hour comedy about greedy schlemiels. My most vivid memories about the evening were that it was the first time I went to the Cinerama Dome in Hollywood (which came to be a theatre I’d know very well) and that, when my father took us to dinner across the street before the movie, I managed to spill an entire glass of milk on my sister. That’s great stuff when you’re seven.

Okay, so finally moving on to the Chinese. I’m not entirely sure if the first movie I saw there was Mary Poppins or Thunderball, but I assume it was the former. Regardless, it began another long relationship with the theatre that has continued until, well, this year.

I’ve just realized that to continue this story will need more space to finish than is practical, so I’m going to leave it here – giving me both the necessary time and a topic for next time. So, until then, let me leave you with this cryptic preview: If you have a cold, don’t let your sister drive – unless you bring a flashlight.