This week Will Leschber delves into redundancy. Bring on the Top Five, Top 5.

Sorry Anthony R Miller, I love your style and I decided to momentarily steal your thunder. Plus, doing a Top 5 for the film Top Five seemed like rhetorical treat that I couldn’t pass up.

Here’s a short list of why the Chris Rock vehicle could work just as well on stage and why the film is smarter than you may think. 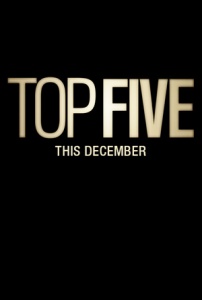 #5- Defining Success: Like a good play, the film concerns itself with theme flavored layers. One of which is the idea of success. While examining a day in the life of celebrity, the film goes to tangential lengths to present the diverse meaning of the measure of success. It’s wonderful to see an intelligent writer wrestle with the idea that we are all bombarded constantly with; everyone else’s different measures of success (old school friends measure it in money or by proving who is funniest, his real-celebrity-housewife measures success in how long she can stay relevant, his agent measures success in ticket sales, certain characters measure it in days sober, etc) and that ideas of personal success often clash with what is expected of us.

#4-Creative Confinement: Rock discusses what many theater makers aim to do; developing the aspect of artistic creation that strives for success yet yearns not to be restricted by a single kind of success. What does it reveal that the character’s most successful franchise film looks equally as terrible as his art house serious piece? It reveals layered writing.

#3-Meta Cinderella/Old Tropes Made New: The Cinderella myth is used here as a creative bookend, a modern upturned metaphor, and a subtle theme. Rock weaves this thread without distraction whether to invert happily-ever-after or to cleverly enhance his conceptual through lines.

#2-Female Standouts: Top 5 unfolds in a way like a series of vignettes presenting circles of the central characters life. You could almost see different areas of a stage light up as the central character moved from one social circle to another. There, different areas of the film are populated by supporting single-note characters. Rock uses this as a strength instead of limitation by having these characters foil and reveal his own true self. The exception is the two central female characters. Surprisingly, they are given more. Gabrielle Union has less to do but plays her two note celebrity housewife perfectly. And Rosario Dawson shines as she dynamically plays off Rock.

#1-Overall Writing: If you haven’t noticed by now, Chris Rock’s greatest strength is his writing, in my humble opinion. Theater is much more of a writers’ medium than film especially when you take into account the number of people who averagely contribute to a film script: the story creator, the credited writer, the uncredited script doctor, the director, a powerful star, an upset producer, the writer who is called in to fix the sections all the other writers already fixed, etc. The refreshing aspect of Rock’s writing is that it feel distinct in his sole voice, organic and near effortless in the execution while still showing the merits of structure and intelligence. All great theater and film rest on a bedrock of words. It’s nice to see that in practice on the silver screen.