Bridgette Dutta Portman, celebrating the close of a 15-year tradition.

How does one portray on octopus on stage?

I found myself grappling with this question in late 2010, amidst my joy over learning that the Playwrights’ Center of San Francisco had selected one of my scripts for its annual short play festival, Sheherezade. My comedy Paul der Krake (which also required a cricket bat) called for an actor to don an octopus costume. I knew this was not something that a typical actor would have in his or her wardrobe (or was it?) and so to increase my bizarre script’s chances of being selected I had included “playwright will provide” next to the description of the costume. They had called my bluff. Now I had to provide.

I ended up taking a red hooded sweatshirt, sewing shut the arms and forming several extra arms out of the lower portion, then stitching on white shower curtain rings to look like suckers. The result, when worn by Wesley Cayabyab, who portrayed Paul the psychic octopus with the perfect blend of sublimity and torpor, was delightful.

I couldn’t have asked for a better introduction to Sheherezade. Now, five years later, I have the privilege of being co-producer for PCSF’s final iteration of Sheherezade, aptly titled Sheherezade’s Last Tales, which opens December 3 at EXIT Stage Left. And I’ve learned that putting together an entire production is kind of like stitching together 6,000 octopus costumes, with live octopuses inside them.

Sheherezade, which has evolved significantly over its fifteen-year history, was not always a full production. It began as a gala event in 2001 featuring thirteen staged readings by PCSF member playwrights, and was so well-received that an annual tradition was born. Beginning in 2004, with Jody Handley as producer, the festival would feature a “year in review” theme, whereby news stories and events from the previous year inspired each selected play. 2007 marked the first off-book production of the show (two nights only at the Exit Theatre). In subsequent years the run was expanded as the festival’s ambition and reputation grew. Wily West Productions came on board as producing partner from 2012 to 2014. Last year, 2014, was a highlight for Sheherezade; the show was critically acclaimed and was nominated for a TBA award for best anthology. This year, PCSF is proud to present eight world premiere short plays in the final installment of Sheherezade before we transition to something a bit different (more on that later).

The “year in review” theme was dropped in 2013, but I find it interesting that several themes have emerged organically to interconnect our plays this year – the most prominent of which is, I think, “deception and revelation.” Each of our plays, in some sense, explores what happens when facades break down and true identities and personalities are revealed. In The Stuff We Keep, for instance, a brother and sister discover a secret their deceased father left behind. By Any Other Name features a lesbian rights activist struggling to accept her partner’s decision to transition from female to male. The protagonist of A Comfortable Life is a woman whose conventional existence is disrupted by a figure from the past she tried to bury. Even our more humorous plays involve people presenting themselves to others in ways that are potentially counter to their true personalities; in Sparse Pubic Hair, for instance, an aging couple on a first date quickly discover that their expectations of each other are woefully mismatched.

I dove into producing with little expectation of what it would entail. As a playwright who has never acted or directed (unless playing a mouse extra in a fourth-grade production of An American Tail counts), my understanding of the process of production was something along these lines:

1. I write a script, which a theatre agrees to produce.
2. Directors materialize.
3. Actors audition and are hired.
4. There are rehearsals. I try to attend at least one.
5. Something called “Tech Week” happens. This is apparently when the people involved in
the show are most likely to lose their minds. I figure it’s something like Finals Week
in college. Or maybe Shark Week.
6. Divine intervention.
7. The play is produced!

As you might imagine, then, this experience was a bit of a baptism of fire. In the words of my tireless and talented co-producer, Jerome Joseph Gentes, it involved “a learning curve so steep it’s not a curve but a vertical line.” I am deeply grateful for Jerome’s help, as well as the support of our directors: Laylah Muran de Assereto, whose years of experience producing Sheherezade has been a tremendous asset, and Adam Sussman, whose patience, professionalism and skill have been greatly appreciated. We also have our excellent stage manager, Arashi Veronica Cesana, our talented designers, and, of course, our wonderful actors and playwrights. I’m fortunate to be part of this strong team.

Among the innumerable things I’ve learned over the past couple of months have been:

• How to tape a floor for rehearsal. (Tip: remember to bring tape.)
• Why lights have to be “hung” (I thought they were just already there?)
• The actual definition of a wing nut.
• The differences between “wet tech,” “dry tech” and “paper tech.”
• What a “costume parade” is (hint: sadly, it’s not actually a parade).
• How to create a promotional video using iMovie.
• How far I can hurl my laptop when iMovie refuses to cooperate.

If that last one makes me sound at all weary, please know that I wouldn’t trade this experience for anything. I highly recommend that all playwrights involve themselves, at some point and in some capacity, in other elements of production – it gives one a new and broader perspective on all that goes into bringing a play to life, and a greater appreciation for everyone involved behind the scenes. Plus, using a drill is just plain fun. 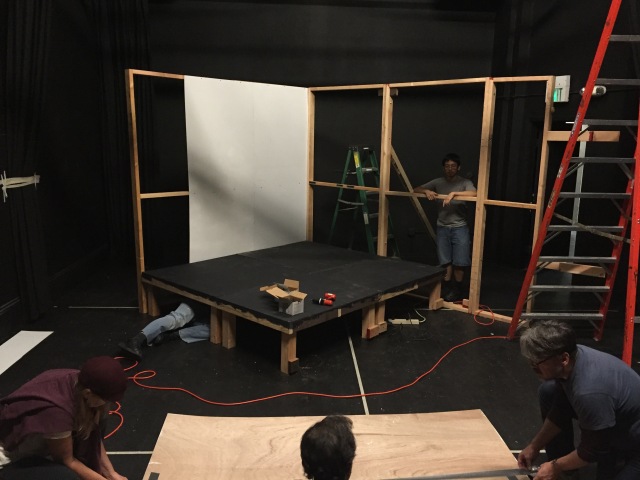 Sheherezade is special to me, and to a lot of people, for a number of reasons. As many playwrights can attest, bridging the gulf between staged readings and full productions can be a challenge, and Sheherezade has provided that bridge for PCSF members. Paul der Krake, my octopus play, was among the first plays I ever had produced. Auto-Incorrect, my entry in the 2013 festival, went on to multiple productions in the UK and Wales and was published in an anthology. The connections I’ve made through my involvement with Sheherezade have been lasting. And I’m not alone. A number of participants had similar comments about their experiences with the festival:

“When Sheherezade 14 accepted my play, The Interview, I was elated. It was the play’s first full production, and it was a very steep and exhilarating learning curve for me. … The Interview was subsequently produced at Towne Street Theatre in L.A., and I’ve worked with my Sheherezade 14 ‘team’ in a number of local productions in the year since then.” – Madeline Puccioni, playwright

“Red Rover Red Rover, Send Rocky Right Over [2006] was my first Sheherezade play and it was, in part, the basis for Believers, soon to be produced in Istanbul and in Monterey in the spring.” – Patricia Milton, playwright (multiple years)

“In all the years I’ve been involved in Sheherezade, the unifying thing, other than the passion everyone brings to it, has been the opportunities it provides. I’ve seen new directors, producers, designers, playwrights, and actors start with Sheherezade alongside veterans and am proud to see their continued successes. It’s been a profoundly rewarding experience.” — Laylah Muran de Assereto (producer 2009-2014, director 2015)

The format of Sheherezade has likely contributed to its success. The “year in review” theme throughout most of the festival’s history resulted in a number of plays that focused on contemporary politically and socially-relevant issues, both dramatic and satirical. Even in the years since the theme was dropped, most plays have retained this sense of immediacy. “The short play format also usually gives us the highest stakes moment on stage, which can be really engaging for audience and actor alike,” comments Sara Staley, who directed for the show in 2009 and 2010. She recalls,

“Two very timely, often funny plays I directed for Sheherezade that come to mind are Michael Jackson and Farrah Faucet arguing over the last hair appointment in heaven on the day they die … and a play that gave us Bernie Madoff and his wife doing their best, in their own way, to come to terms with the depth and consequences of their wrongdoings.” 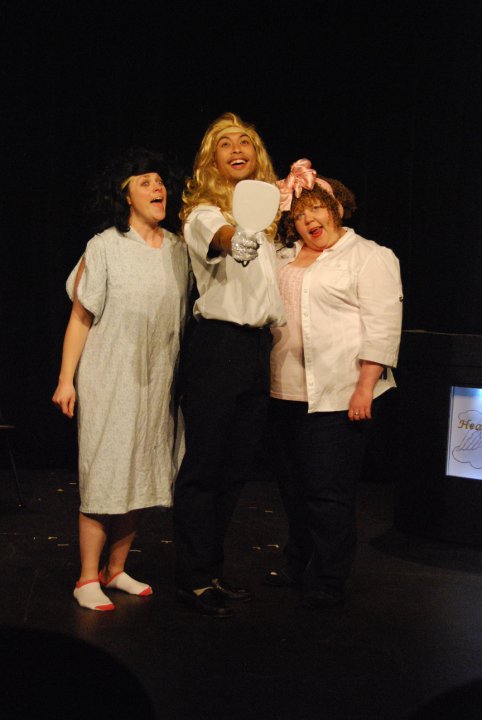 Actors, too, have found their experiences with Sheherezade memorable. “One of the greatest acting challenges I’ve had was playing Allen Turing in Rod McFadden’s Of Machines and Men in Sheherezade in 2012,” recalls Edward Kimak. He continues:

“Here was a man who was a gay, brilliant, stuttering Brit with Aspergers syndrome. Balancing all those elements while still being ‘in the moment’ for each scene was very difficult—as was going through the arc of his life in under 20 minutes! Luckily I worked with director Ann Thomas who understood the challenge and helped me get just the right mix.”

While this year’s show is the last Sheherezade, it is by no means the end of PCSF’s short play festivals. In the works for next year is a new program that will culminate in a fully-produced short play festival in the spirit of Sheherezade, but whose plays will be selected in a new and very different way that will allow more of our member playwrights to be involved in the process. We’re excited about this new development and can’t wait to see what our members will come up with next year.

In the meantime, as we head into tech week (note to self: it’s not like Shark Week…but then again, it sort of is), and I see all the elements of our show coming together, and opening night is a few days away, I feel both pride and gratitude. I am grateful to PCSF as an organization, to our prior producing partner Wily West, and to everyone who has been involved in this festival since its birth in 2001.

Please join us for our last Sheherezade, so we can celebrate together all the talent and hard work that our playwrights, actors, directors and designers have brought to this special production for so many years.