It must be one of the sweetest things. The understanding and collective feeling of that moment in the play — the one we all worked for — actors, playwright, director, technicians, stage manager, designers, all. The moment in between anticipation and satisfaction, between understanding and wondering. It’s the moment of silence where regardless of the quality of anything in or outside the world of production something settles and rests. Sometimes this moment feels more profound than others, but I believe that it’s always there. Or, at least it’s potential is there, and to me, while subtle, it’s still enough to be noticed and appreciated.

To me, this moment of silence isn’t really silent at all — just as I find more and more that there are no true moments of silence. Something is always moving and developing whether heard or not.

I have become enamored with silence and how it is used within theater in the past couple of years. Not just at the end of a play – if I’m lucky, maybe I get that kind of response to something I wrote – but within the work as well. I’ve been looking for moments where seemingly “nothing is happening”. I’m in good company, treading on the heels of Annie Baker and Toshiki Okada, among others, playwrights who understand the underlying tension of people inhabiting a room together, but not speaking. Why? The tension is palpable and felt if you have ears to hear and are able to settle in to the initial discomfort that comes from not knowing what’s happening, who is in power, who will speak next. 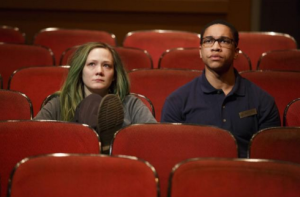 The Flick by Annie Baker. Photo by Joan Marcus.

I recognize that this feeling is not for everyone. Some find it boring, but I find it anything but. Remember the controversy over THE FLICK, Baker’s play presented at Playwrights Horizons? The play described as having a “glacial” pace enraged members if the audience who were enraged by what they saw before them. How could a theater company be so daft as to produce a play with nothing happening?? But others pointed to the tremendous emotional turns that were supported by these silent moments, only possible if you’re able to settle in, be patient, and truly tune in to watch what was happening– feel what was happening as the players were drawn into moments of uncomfortable, heartbreakingly silent moments of intimacy.

ZERO COST HOUSE, adapted by Pig Iron Theatre Company from Toshiki Okada’s work, had the similar kind of use of silence. I remember seeing it in Pittsburgh at the Kelly Strayhorn Theater, at first confused and annoyed at how long it was taking to get to the next thing. Then, I realized, “oh, it’s intentional!” and it hit me — something else WAS happening in those moments that was much more powerful than anything I’d experienced between robust movement or dialogue exchanges. Moments where the characters were waiting for reactions from one another, for ideas to settle in. Perhaps it was something that could maybe only be felt because of the lack of words, sounds, and volley of ideas. Afterwards, chatting with my friends, most of them sat in camp “what the fuck was that?!” where as I was in camp “what the fuck was that!!” And another realization that subtlety is not for everyone. Maybe can’t be for everyone at least initially. Perhaps has to be trained and cultivated and come in the right moment in one’s life when one can truly stop and listen to the orchestra of the unspoken.

And now? I can’t not write a moment of unspoken interaction between characters. I sometimes guide the length by perhaps describing the moment in the stage directions in intimate detail. Sometimes it’s a bit more poetic and left for interpretation. But in the movie in my mind, it’s a long, visceral moment where characters yearn for closeness. Or something. It’s like sitting in a meadow and all the sudden something catches your eye. You realize that an animal has started to emerge from the bushes. And that it knows you’re there. Do you rush over and try and grab it? Or do you wait and watch to see what it will do? We’re all different I suppose, but I’ve always been curious about what this little deer or squirrel or rabbit might point me to. Even if it’s just going to just eat some nuts or something, how often do we get this encounter?

Maybe it does point back to something missing or something we crave in our waking world. Perhaps we wouldn’t have such a powerful reaction when we encounter these moments where “nothing happens”. I’ve started to question if that is truth and so have stepped into the place where I can listen to what is about to happen next. I have this idea that if you tune in and just sort of gently wait it out, that you’ll know what happens next. It’s always expected. So then, if the question stops becoming, “what happens next?” and “how does it happen?”, what are the new questions now? And does it mean that whatever preconceived structure we choose – linear, non-linear, whatever – are they still relevant? I don’t know. Until I find the answers I’m happy to quietly watch and notice the world around me.

Barbara Jwanouskos is a Bay Area based playwright who is a part of the Playwrights Foundation’s FlashPlays Festival on Dec. 6 and 7. You can follow her on twitter @bjwany.