Ashley may be 3000 miles away but it’s like she’s right next to you, singing in your ear about her interview with Kirk Shimano and Sang Kim, who prepare to rock San Francisco Theater Pub with Portal: The Musical!

Hello there, my San Francisco friends! Wow, what a few weeks it’s been, huh? Lots going on all over the world but I have to say getting the chance to interview writer Kirk Shimano and director Sang Kim was a real treat. This dynamic duo is currently working on San Francisco Theater Pub’s latest show, Portal: The Musical.

The cast features Alan Coyne, Jamie Lee Currier, Dan Kurtz, Courtney Merrell, and Karen Offereins with musical direction by Liz Baker, voice direction and production design by Renee LeVesque, and Paul Anderson and Spencer Bainbridge rounding out this rockin’ team as the band. The show is set to the music of Jonathan Coulton and this theatrical piece is sure to be unlike any other production you’ve seen this millennium. 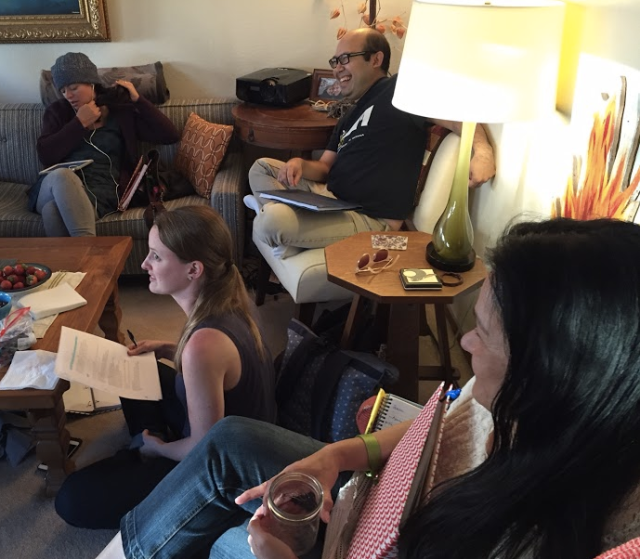 AC: So firstly, what are audiences in store for when they sit down for Portal: The Musical?

KS: I think the experience will be pretty different based on what the audience member is bringing in. Fans of the video game are going to get to see the story they love brought to life in a totally different way. Jonathan Coulton fans will get to hear their favorite songs for the first time again when they’re sung by our characters. And people who don’t know anything about either are going to discover a whole new world that they never knew they were missing.

SK: A lot more feeling and earnestness than you’d expect for a video game based on dimensional rifts and psychotic artificial intelligence. Also – this show passed the Bechdel Test with extra credit! Good Job sticker for us!

AC: So, how did this project come to be?

KS: I played through the original Portal in one sitting and it’s been a favorite ever since. And when I found out the guy who wrote “Still Alive” had a whole repertoire of other work, I got my hands on all the Jonathan Coulton music I could find. But this all really gelled for me when I heard the song “Code Monkey” on the Best. Concert. Ever. album. As soon as I heard that, I immediately knew there was a character behind this song and wanted to bring it to life in a full musical.

SK: Kirk emailed me back in June 2013 after he punched out a first draft during his stay-cation. I replied back and said yes to working on this. I wish it was more dramatic and suspenseful, but there it is. How about we just pretend Kirk threw the script into a Thunderdome death pit and I emerged the victor and claimed the musical as my prize.

AC: What’s been the biggest surprise you’ve experienced while rehearsing a musical about a video game?

KS: I’d say it’s just seeing all the passion that people have for this source material. There’s always a great level of support among other members of the theater community, but it’s been wonderful to also see friends who wouldn’t necessarily consider themselves “theater people” get really excited about this project because of their connection to the source material.

SK: Agree with Kirk. It’s gotten to the point where rehearsals are going long because there’s too many ideas and too much fun being had. And, oh Lord, the spontaneous singing. Always with the spontaneous singing. People singing and making up lyrics and breaking into song. It’s like witnessing a karaoke playlist for ADHD show choir students on meth.

AC: What’s been your favorite moment so far while working on the show?

KS: I’d have to say it’s those moments in rehearsal where we’ve had everyone sing along together. Our cast and creative team has been wonderful to work with in general, but that’s the moment when I just feel we’re all the most connected.

I played viola in the orchestra so the power of group singing has never made an impact on me until this show. I finally understand why the Grinch’s heart grew three sizes that day.

AC: What drink do you think would pair best with the production?

KS: Maybe one of those novelty drinks that comes in a beaker and has some dry ice to make fog spill out over the sides? Because something that is fun and a little creepy with a chance of killing you is basically the character of GLaDOS.

SK: Anything garnished with olives – just one olive so your drink is looking back at you which reminds me of all our little robot friends from the game. 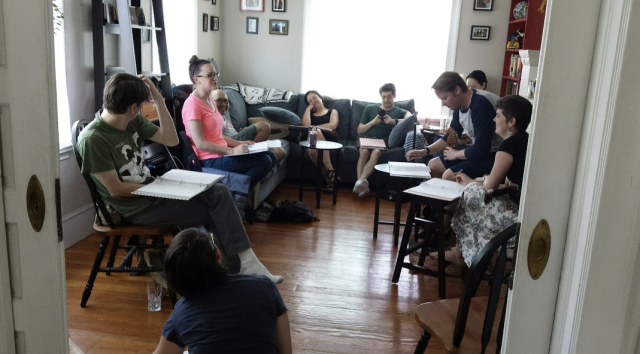 AC: What’s been the hardest challenge you and the cast/crew have faced while bringing this story to life (and song!)?

KS: I feel very fortunate in that Sang has been taking on the HUGE task of all the scheduling and coordination of bringing together all of the talent need to bring this together, and I just get to watch. But one challenge that comes to mind was having to cut a couple songs from the script that I really like but that weren’t serving the story (sorry “I Crush Everything”).

SK: Kirk is gracious but having this specific group of talent has been worth all the wrangling. The hardest thing is to pull the show back for a staged musical setting at Theater Pub. I think a lot of past contributors have excelled in presenting fantastic shows in such an unconventional setting. But the scope and creativity of Kirk’s musical, the Portal universe, Coulton’s songs,along with the talent involved have actually been an embarrassment of riches. Having limited time and resources means picking and discarding your darlings.

AC: Tell us more about what you’re up to after this show! Any fun new projects on deck?

KS: Next up for me will be the San Francisco Olympians Festival, which I’m happy to be returning to for the sixth year in a row. I’m looking forward to sharing a night with three other playwrights (Barbara Jwanouskos, Julianne Jigour, and Alan Coyne) as we present three very stylistically different approaches to the gods of sleep and dreams.

SK: After some rest, I’ll be helping co-write Thunderbird Theatre’s next original play. It’ll be a creative collaboration with The Mess sketch comedy, which also has a show up this November.

AC: What Bay Area show (other than this) are you most excited to see this summer?

KS: I’m a big fan of musicals in general, so I can’t wait to see City of Angels at the San Francisco Playhouse and Chess at the Custom Made Theatre Company. I’ve been a big fan of the cast albums of both and neither is a show that you see performed all the time.

SK: I was glad to see The Rules and the Loud and Unladylike Festival, but they both closed this past weekend. After that, probably my usual summer and fall diet of Pint Sized Plays and the Olympians Festival before I hibernate for the winter.

AC: Using only emoticons, how would you describe Portal?

AC: If your directing/writing style was a song, what would it be?