Claire Rice bravely talks about one of the Bay Area theater scene’s biggest elephants in the room.

“Critics sometimes appear to be addressing themselves to works other than those I remember writing.” – Joyce Carol Oates

I’ve written on this blog multiple times that honesty about our opinions on the art around us shouldn’t be condemned, but is itself a necessary element of the act of creation. We do not create in or for a void. I myself go on and on about my wishes, my favorite things and my awkward (and possibly hypocritical) feelings about pretentious theatre. While I believe what I say has merit, it also is done on an utterly volunteer basis. My opinions matter to me, but they will not be part of the historical record of events. Whatever my impact has been as a writer for this blog (whether it has induced eye rolling or link clicking or whatever) I have my doubts about any sort of prolonged impact. Despite the fact that it’s called “Enemy’s List”, it is more or less a victimless blog.

This is not true of reviewers. These are the men and women we reserve seats for, hand press packets to, and have debates back stage about how to interpret their laughter or their sighs. Their opinions do matter. When a person is paid for their review it has a legitimizing effect on both the writer and the show. It means that the opinion was worth paying for and the show was worthy of the time it took to see it and write about it. This is, of course, an over simplification; but then to your average civilian who is looking for either a) something to read about while on the train or b) something to do on a Friday night none of this background matters. They only have what is right in front of them in black and white. This person’s opinion is worthy of print and this show is worthy of being reviewed.

In my day job I’m asked to research news items from “legitimate sources” for evidence in cases to be presented to our government. The government still operates on the premise that if it is in print it is “legitimate”, which is why when you create a business and you have to post your business name it must be in a printed newspaper. These sorts of things may be the only thing keeping the printed word a float: people paying to legitimize themselves. It certainly isn’t the news or people’s opinions of art. So print news sources have had to cut back to the minimum.

Which means critics and reviewers are a dying breed.

Reviewing used to be one of the avenues for writers to earn an income while writing books, or poetry, or plays or something. Now that there is so much free space on the internet, the phrase “everyone is a critic” is literal. Social networking is dependent on opinionated people dispensing of their opinions for free. Or, a person can start up a blog, sell ads for revenue, and start saying whatever they want about anything. Aggregates like Huffington Post aren’t necessarily curators of these blogs when they re-post them. Sometimes they are, sometimes the relationship is based on algorithms.

Is a person now legitimate because of their click rate? The title of this post is “Reviewers Suck”. This is a little bit of the old bait and switch. I don’t think reviewers suck. But if a lot of people read this, does it mean it is legitimate? Am I the one who decides something like that? Is it you, the reader? Is it a reviewer of blogs? If this blog gets an award does it mean it should be taken more or less seriously?

I would like to reiterate that I don’t think reviewers suck. I do think the relationship between the reviewers and the reviewed is always fraught with emotion.

I didn’t invent being butt-hurt due to an unfavorable review.

“Asking a working writer what he things about critics is like asking a lamp-post what it feels about dogs.” – John Osborne

And when is it ok for me to be critical of them?

Taylor Mac commented on fellow Theater Pub blogger’s Facebook page to call her out for her opinions on his show “Hir”. You can read her post here. Unfortunately, the conversation happened on her page on Facebook, and I don’t think it’s appropriate to link to it. Marissa’s opinion of “Hir” did not illicit a loving and positive response from Taylor Mac and he felt the need to reach out and tell her so. Is it because she isn’t a published reviewer, but her thoughts are published on her personal blog, so he felt she was approachable? Is it because she is a big fan of his and he felt he could change her mind? Is it because he’d gotten several favorable reviews and this one was the one contrary one? Did he get too many unfavorable ones and this one was the straw that broke his back?

Whatever the reason, we’ve all wanted to do it.

“Reviewers , with some rare exceptions, are a most stupid and malignant race.” – Percy Bysshe Shelley

A reader can develop a relationship with a critic over time and come to trust their taste and their expertise. A reader can also come to trust that they will disagree with whatever a critic may say. I really only read theatre reviews after I’ve seen a play. In which case, I am either looking for someone to agree with me (because I like that) or someone to vocally disagree with (because I like that too.)

But, in this atmosphere of fly by night bloggers, Gold Star reviewers, social media status updates, aggregators, and dying print media; how do we develop relationships with reviewers? And I do mean develop. The people coming out of college and starting up little theatre companies, who do they email to invite to shows? Who’s opinions to do they take seriously and who’s do they silently tolerate? Who is legitimate?

In the heat of the moment, after reading five hundred or so words on something I’ve worked the better part of a year on, I am willing to dismiss the whole lot. But I know this isn’t fair or correct.

But, here are the things I want for our reviewers and critics in the Bay Area:

I want more of them.

I want them to be younger and hungrier.

I want them to be well informed culture omnivores.

I want them to be better writers then I am.

I want them to be openly critical of each other.

I want them to be openly critical of and write often about the whole Bay Area scene.

I want them to work the whole Bay Area.

I want them to have a sense of history in their reviews.

I want them to be rewarded and awarded for their efforts.

I’m not looking for a reviewer or critic who will be “on my side”. I’m not hoping that with a critical mass of writers there will be one out there who “gets my work”.

“Loyalty in a critic is corruption.” – George Bernard Shaw

“You need a high degree of corruption or a very big heart to love absolutely everything.”
– Gustave Flaubert

But I will say that there are some reviewers and critics who I don’t take seriously, whether it is mine or someone else’s work they are commenting on. I will also say I don’t feel like there is a guiding star to tell me who I should take seriously and who I shouldn’t. I can’t be the only one who feels this way. And since reviewing our reviewers is the only real taboo in theatre, I’ll leave you with that. 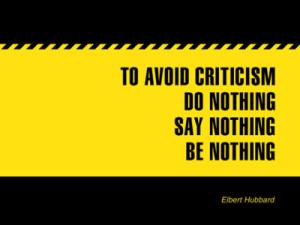