Rik Lopes, a frequent collaborator with the San Francisco Theater Pub, talks about directing this year’s contribution to the Bay One Acts Festival. A dramatic and challenging piece, “Shooter” looks to be a real unique part of this year’s festival, and just in case you didn’t think it would be a serious piece of art, Rik sent us this amazingly serious headshot. 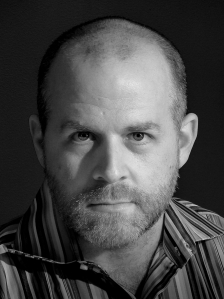 I have been making theatre in some form or other since I was 10 years old. I have been actively involved in the San Francisco theatre community since 2007, having come back to my senses after a goodly long hiatus. I am an actor, director, and playwright, but not necessarily in that order.

This isn’t your first time working with Theater Pub, is it? What have you done with us in the past.

I have appeared in several readings, including Hamlet and Cheese on Post, The Memorandum, and The Shunned House. I was also very fortunate to direct both the pint-sized scene and full production of Brian Markley’s The Nebraskan And Sam.

This is your first time at BOA, correct? What’s that like?

Indeed it is. I have often been regaled by friends with stories of how much fun BOA is and am excited to finally be a part of it. I must say, I am very impressed by the sheer vastness of it all. I went into the project expecting to direct a really cool show and quickly learned that I would also be making friends with theatre companies from all across the city.

We know why producer Brian Markley picked this play, “Shooter” as the TP contribution to BOA, but what drew you to the piece?

I am always drawn to the dark horse pieces. BOA is generally assumed to be a collection of comedic pieces and I was very glad to discover “Shooter”. I was immediately drawn to the serious and dark nature of it. I am also a big fan of tight spaces filled with people who never actually interact with each other physically. It’s a fantastic challenge for a director.

It’s your first time working with Daniel Hirsch, the writer. How involved is he in the process?

I first met Dan at the general auditions and was impressed with him right away. He is very open to my ideas and continued to rework the script until the very end. He’s a super talented guy and I’m very pleased to be partnering with him to bring this show to life.

What’s turning out to be the biggest challenge in directing a piece like this, and in a festival setting?

I have to say that I tend to veer toward the minimal as a director. The less “stuff”, the better. Let the text speak for itself, that is. Part of me wonders if such a pared down show will fit harmoniously with the other pieces, especially if we have an audience expecting a bit more of a belly laugh.

If we pull this off, the simple, dressed down concept may very well be our best asset as well. It can really be a standout.

How is this show still a Theater Pub show, despite not being performed in a bar?

One of the greatest things about Theater Pub is the immersive element and the chance to take advantage of unconventional staging and blocking. There’s a remarkably wide angle on the lens, so to speak, and you can really play with that. With “Shooter”, it’s as if we have jumped into the mirror world of Theater Pub. We have three very strong personalities who each inhabit a stiflingly small space but experience it in their own time. The audience sees three different stories unfolding at once.

What else at the festival are you most excited to see?

I’m really looking forward to “Break Of Day”. It’s a solid script with a great cast. I know Bryan Trybom as an actor and have always loved him on stage. I’m excited to see him direct.

“Shooter” will play, along with an assortment of other excellent one-acts in this year’s festival, September 15, 19, 21, 25, 27, 29 and October 3 and 5 at the Tides Theater in San Francisco. To find out more about this show, and all the great shows that will be a part of this cornerstone event for the San Francisco Bay Area Theater scene, check out http://bayoneacts.org/.