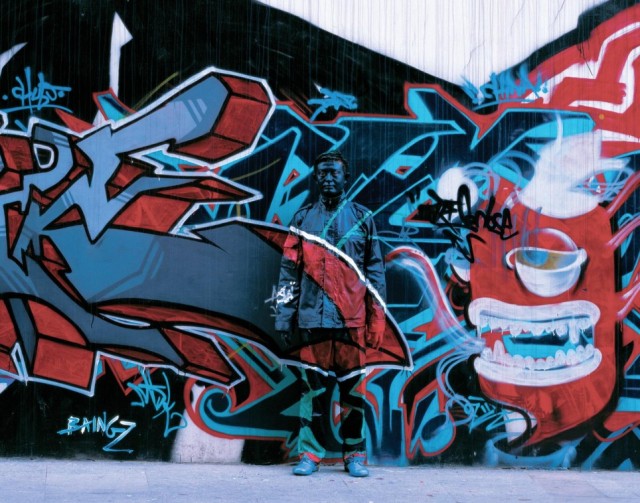 PIC BY CATERS NEWS – The amazing art of LIU Bolin, “THE INVISIBLE MAN “
In this series called Hiding in the City
LIU uses his body as an art medium by hiding himself in different
city locations from China to the UK.
Liu Bolin was born in 1973 in Shandong, China and graduated from the Sculpture Department of Central
Academy of Fine Arts with a master degree…..SEE CATERS COPY

“A common mistake that people make when trying to design something completely foolproof is to underestimate the ingenuity of complete fools.”
– Douglas Adams, Mostly Harmless

It’s interesting to come across American Theatre’s recent article about the use of video projection on stage when our ‘Pub theme for this month is design. In fact, it was after our most recent show, Explore the Trope: Don’t Fall Asleep!, that I got into a conversation pondering the use of projection with live performance in a small bar venue.

Set design has always interested me because it’s one of the areas of theatre over which I’ve never had any sway. Having performed in stadium-sized theatres, countless black box theatres, a few outdoor venues, and one weeklong stint in a hotel room, I often have a hard enough time finding my bearings for each setting. Sure, I’ll secretly admire (or lament) each stage I’m on, but I’m often grateful that I’m not the one who has to decide what it looks like. I just don’t want to fall off of it.

That all changes when I have to direct, but thankfully the mental real estate that would be saved for remembering lines is taken up by wondering what shade of blue walls would best accentuate the scarf the actress brought from home. Having done the majority of my directing in black boxes, it hasn’t been much of a concern; black really does go with everything. Still, I look at my dream projects and I ponder the possibilities of what could be if I had the rights to certain plays and an unlimited spending account. I’d probably wind up doing a production of The Miracle Worker that would like look Mark Romanek and Hype Williams sharing the same fever-dream until they get trapped in it, Inception-style.

Still, it’s fun to imagine what my personal stamp would be on many productions I’ve seen. The simultaneous blessing and curse of an artistic mind is that it’s always working. So when I go to a show and see the greatest actors spout off the most beautiful words with the greatest of ease, it shouldn’t be a surprise that I can be completely distracted by atrocious set design that might as well be called Playskool presents “Baby’s First German Expressionism Play Set”. I’ve seen sets seemingly designed to try and kill the actors – and a few that nearly have. A set designer is an artist and should be encouraged in their sensibilities as much as any artist in the production, but like those other artists, they have to be reined in from time to time. Otherwise you’ll wind up with a crowd scene that’s ruined by an obtrusive set piece that juts out from CS-Right when the actors are supposed to run as if nothing’s there.

I look at the above article and I wonder if a truly if it’s at all possible to one day have what George Lucas called “The Digital Backlot” on stage. Will hologram and projection technology one day advance to a level of such sophistication that the actual building of sets is no longer needed? Would a marathon of the Coast of Utopia trilogy simply require a few keystrokes to put the actors in 19th Century Russia? Will someone one day do a production of Our Town in which we actually see Grover’s Corner and watch it transition through the years (which would miss the point of staging that play, but still…)? I kinda doubt it, but never say never.

I need to do laundry, so I’ve been wearing the same shirt for the past few days. It’s a black tee with the psychedelic likeness of Jimi Hendrix on the front. The short sleeves are stained with white paint. The paint is from when I was asked help build the set of a local production a few years ago. It was opening night with an 8pm curtain and I was asked to come in around noon to help with… everything. I mean walls needed to be hammered, doors needed to be hinged, and yes, everything needed to be painted. Since I knew the cool tech people in the show, I agreed and we finished juuuuuuust before the House Open. It’s one of those incidents that reminds me of why I love theatre: for an art form based around playing Make Believe, there’s something about the tangible that can’t be replaced.

I’ve seen shows that made subtle-but-effective use of projection and I’ve seen some that were garishly showing off. Like all technology it’s a tool; less defined by its use so much as how it’s used. Off hand, I can’t think of many potential shows were I’d want to use it, but it’s nice to know that it’s an option. ‘Til then, I’ll just admire the countless hours of labor spent building walls to make me believe I’m somewhere other than a theatre.