Guest blogger Kirk Shimano explores the connection between video games and theater from all sides of the equation.

For the last year, I’ve been telling anyone I meet “We’re going to be adapting the video game Portal into a musical!” This led to some delightful conversations about one of my favorite games of all time, as well as some wonderful tangential discussions about the music of Jonathan Coulton (which figures prominently into our show), but I can’t help think that all of these conversations shared the same subtext:

“Making a video game into a musical? That’s weird.”

In all fairness, the track record for video game adaptations isn’t that great.

The thing is, long before promoting our upcoming musical (PROTIP: July 18 – 26. Don’t miss it!), I’d been a huge proponent of musicals in general. It’s been my impression that a lot of people view the musical as a rather limited genre – boy meets girl, couple single sappy love song, potentially while dressed like a cat / opera phantom / lion king – and I think that’s why the combination of video game and musical strikes so many as being so unusual. It’s like, what’s next, video games interpreted as baked goods?

That was a really bad example for me to pick, because there are literally thousands of photos like this on Pinterest.

This all got me thinking, though. Is it really all that unusual to adapt a video game into a musical?

Adaptation is in the DNA of the Broadway musical. Out of the 71 Tony Award winners for best musical, 58 were adapted from existing source material (give or take a couple, depending on your definition of adaptation). Musicals have looked to non-musical plays, narrative films, documentaries, biographies, novels, graphic novels, newspaper columns, magazine features, TV shows, and other musicals for their inspiration.

The cynical way of looking at this is that musicals are expensive, and before a producer is willing to write a check for an orchestra and a full set of wigs, it helps if there’s some existing momentum behind a property to help build interest.

By the way, did I mention that our Portal: The Musical is based on the extremely popular video game Portal? Okay, just checking.

One could also observe that taking on the task of creating a musical is basically introducing a whole new dimension in which things can go wrong, so it’s helpful to have the safety net of a story that has already proven itself in another medium.

But I think there’s a brighter, more aspirational reason why so many musicals are adaptations. I love musicals because they are a singular art form in which story, music, dance, and all of the other theatrical arts combine to form more than their already formidable parts. It has the power to create singular, indelible moments. And because the musical form provides such unique insight, I believe it has the power to take an already beloved property and transform it into something new, giving us that rare chance to discover something we love all over again.

This seems like an appropriate time for me to watch “Ring of Keys” for the sixty-fourth time and sob quietly for a bit.

But, with all this being said, there still isn’t a flood of video game-to-musical adaptations. So is Portal: The Musical an odd duck? I think the answer here is to focus less on the source medium and more on what the source brings to the table. And for that, I think back to my very first time playing Portal.

For those unfamiliar with Portal, it’s a puzzle-oriented video game where the player takes the role of Chell, a mute protagonist endowed with the ability to create space-bending portals. Her adversary in this is a sentient AI named GLaDOS, who begins as a neutral instruction voice and gradually grows into something much more hilariously demented.

I was a huge fan of the way the game encouraged you to bend the rules as much as possible. The puzzles and the story felt fluid and organic. The game clocks in at a streamlined eight hours or so, and while I enjoyed the game’s final confrontation I didn’t feel quite ready to put down the controller yet.

Here was a song that perfectly encapsulated the spirit of a character and the tone of an entire piece. The experience just would not have been complete without it, and it’s what cemented Portal on my list of all time favorite games.

When I think about that, Portal doesn’t seem like an odd choice for a musical at all. Hopefully you’ll be able to join us and see if you feel the same.

On September 10, 2015, Shigeru Miyamoto settled a mystery that was 27 years in the making. Miyamoto is the driving force behind some of the most influential video games of all time, Donkey Kong and The Legend of Zelda among them. But last September he took to Twitter to answer questions about his most famous creation.

“Was Super Mario Bros. 3 all just a performance?” the video interviewer asks?

The evidence for this theory of Mario is explained better in this image than I ever could:

Unfortunately, I was unable to determine the original creator of this image, but thank you Internet sleuth, whoever you are

A personal favorite memory of mine comes from 1994, at the height of the 16-bit Super Nintendo era. Simply put, Final Fantasy VI is your classic swords and sorcery meets steam powered robot adventure, where a band of unlikely allies are tasked with saving the world from destruction. But it’s not all meteors and mechas – halfway through the game, Celes Chere, battle-hardened, genetically-enhanced, disgraced general of the Empire is called upon to perform in an opera. 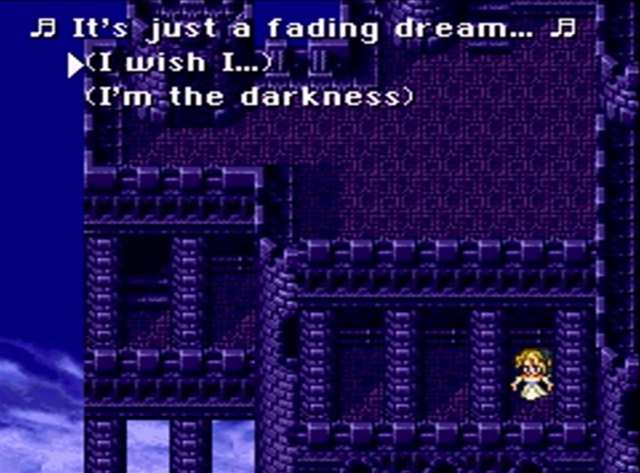 There are two kinds of people in this world: those that have never seen this image before, and those that have watched all of the orchestral renditions of “The Opera of Maria & Draco” on YouTube

Admittedly, the interaction here was fairly primitive – the player chooses a few lines of dialogue and then walks across the stage. But damned if my teenage budding theater-loving self didn’t milk those few steps across the stage for every second they were worth.

The phenomenon of plays within games isn’t something that’s gone away, either. The recently released expansion to The Witcher 3 features a main quest entitled “The Play’s The Thing” where the player is tasked with staging a successful show.

I don’t think this is a coincidence. Video games are based on a foundation of keeping the player engaged with the action of the story; theater provides a similar immediate engagement between performer and audience. If the characters in a video game stopped to make a movie they’d be distancing themselves from the audience they’re interacting with, and it’s no surprise there are few video game novelists who aren’t named Alan Wake.

Even so, it’s hard to argue with the tension of an incredibly dramatically lit typewriter.

As video games push further into the realms of Virtual Reality, it seems likely that we’ll be seeing even more of these bonds with theater. One of the challenges of VR is designing a space that can be viewed from all angles, where the player’s attention is subtly directed towards a certain point of action without the benefit of a movie camera’s hard edits, and who knows that better than a director who has staged a play in the round?

Other video game endeavors hope to deliver a nonlinear narrative experience where players are able to discover a story at their own pace. Theater has already been dabbling in this area with experiences like Sleep No More.

So what effect does this impending synergy have on our forthcoming Portal: The Musical? I, for one, would love to strap on a VR headset and see a virtual GLaDOS sing and dance her way through our script. But until that’s possible, come check out our show on July 18, 19, 25 and 26 to see the type of intimate performance that will be coming to your video games in the future.