As I sit down to write this, I continue to suffer the slings and arrows of outrageous fortune. Meaning, I stupidly ate some Sonic on our road trip home from Arizona and my stomach feels like it’s been repeatedly stabbed with a dinglehopper.

But I’ve also been distracting myself with the current Facebook message chat group I have with some of my lady friends entitled “Bachelor Chats”. It’s been our way to organize our next weekly viewing night of our current reality show, share stickers and emoticons, and speculate about the love lives of our mutual friends. Our discussions can be unapologetically gossipy and brutal. It’s awesome.

Now, it’s no surprise that I have a weakness for reality TV. Yeah, I know it’s trashy and it’s not good for me; it’s my Sonic meal when I should be eating a salad (hail kale and all that). But my love for it has only strengthened over the years as I’ve tried to tempt people into watching it with me. And The Bachelor is my favorite. 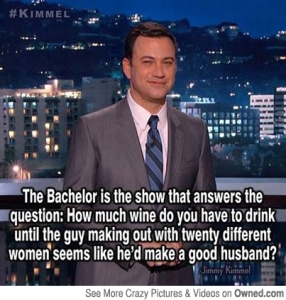 What’s not to love about watching thirty beautiful, crazy eyed women fight for a flower given by some studio groomed fella who is either shirtless for almost no reason or in a tux for almost no reason? It’s also the place I learned the phrase “grown sexy” and that’s simply invaluable! Maybe it’s the actress in me who enjoys seeing these gals “audition” and fight rejection. Or maybe it’s the writer in me wishing I could capture some of the overly dramatic dialogue and sloppy displays of gruesome affection. Or maybe it’s the romantic in me that can’t help but root for love, even when it’s manipulated. And sure, I hate myself a little for being cruel and laughing a bit too hard at the montages of people weeping but it’s still pretty delicious. Besides, even if it gives me a stomachache, similar to the one I have now from eating what I’m now calling the devil’s food, I keep coming back for more. I’m a true glutton for punishment, I guess.

But I’m actually not alone in my reality TV haze. In fact, over in England, reality TV is having a pretty big influence on their theatre scene. It’s believed that because of the reality shows dedicated to casting some of the city’s big productions (which began with How Do You Solve a Problem Like Maria? on BBC1), tickets sales are the highest they’ve been in 25 years. In addition, they’re finding that the musicals used for these reality shows are getting nearly a quarter of their audience from those who watched the reality show and became invested in the production.

I can’t help but wish this trend would gain some popularity in the United States. We had In Search of the Partridge Family, Grease: You’re the One That I Want!, and Legally Blonde: The Search For Elle Woods across various networks but the ratings never seemed to be high enough to warrant another show. Though, Jersey Shore’s Snooki recently announced she’s interested in being on Broadway and I wouldn’t be surprised if MTV turned that into another opportunity to cash in on her unexpected fame. And who am I kidding? I would absolutely watch that train wreck.

In the meantime though, I take what I can get. Though, I will say, most of my Bachelor watching group consists of ladies I’ve met thanks to theatre world in some capacity. Which totally seems appropriate given the theatrical element to the show. Whether we met thanks to a shared show, working at a theatre camp for wealthy New York City kids, or we share a mom, we’ve got a good group (and a crew of people always open to others joining us). The hardest part of scheduling our viewings though is that most evenings have already been promised to a rehearsal for some exciting new project. Damn you, talented friends!

But considering my current state, these nights have become even more appetizing to my hungry palate. Because for a few hours, I get to surround myself with talented theater makers while I’m not involved in a show or production of my own while ridiculous and brilliantly edited “romantic” scenes light up our space. I get a piece of the community I love while elevating my feet; I catch up the latest local juicy news and laugh in excess; I celebrate being there for the right reasons and to make friends. Plus, there are snacks. There are always so many snacks.

Evenings like this are limited for me. In like eight weeks, “ladies night” will consist of my newborn and me making late night bets over which fame-seeking biotch will get the final rose and inspire hours of further sleep-deprived online reading.

While I desperately miss being involved in a show, I’m grateful for the company and entertainment. Reality TV is no real substitute for theatre just like Sonic isn’t really a smart replacement for a meal and it never will be, but for now, I’m thankful for that handsome farmer dude and the women with questionable jobs and ages for entertaining me greatly in the meantime.

Ashley Cowan balances hugs and cuddles with blades and waves.

I’ve never been much of a pot stirrer. I’m either seasoning that pot into a delicious savory dish or I’m burning my mouth to devour what’s inside it because I’m starving. But making a point to cause a heated commotion? Eh, it’s not exactly my thing.

Growing up, I always valued kindness above everything else. I believed that nice guys finished last only because the best things are saved for the end. Even now, I’m the kind of person who can’t sleep because I’m worried I forgot send someone a happy birthday greeting on Facebook.

But I realize “being nice” isn’t exactly an ideal trait to possess in a creative circle known to praise voices who are outspoken, artistic, and bold. And often I find that because I’m not speaking out of anger, my voice tends to go unheard.

Except in RENT, where I got a microphone.

Maybe my blog and my general lifestyle don’t scream in raging profanities. Sure, I watch a whole lot of terrible reality television and endless videos of adorable animals doing adorable things. But that doesn’t mean I’m not a valuable member of this community too. And it doesn’t mean my voice deserves to be talked over just because someone else is speaking louder.

It’s been an unfortunate understanding to realize that often people assume because I’m nice, I’m also stupid. Not like a moron, just sweetly stupid and naive. Ignorance is bliss, you know what I mean? And sometimes that sucks for me. Just because I’m kind it doesn’t mean that I care any less about making this community stronger and better than what it is right now. Yes, I’m aware it’s far from perfect, but I often chose to view it with optimism instead of getting drunk and yelling about it. I want to thoughtfully problem solve. I want to be a part of the conversation. I want to make positive changes.

Plus, why do I have to be angry all the time to make this a better theater scene? If we’re aiming to have more honest conversations, why does honesty need to equate anger? I appreciate those of you who get fired up and burn to encourage change, I do. But if we all go around starting fires everywhere we step, pretty soon every theater will be made of ash and we won’t have a place to play.

See those fences? They guard the ashes.

And, I want to work again! Preferably here. If I trash talk everything, who is going to want to work with me? Besides, the real truth is, I’m not exactly in a position where I can get away with always speaking truthfully about every poor production I’ve been a part of or every performance I haven’t really cared for, especially in such a public forum. I’ve learned when to hold my tongue and when to inquire its service in helping me to address a concern.

But to all those pot stirrers out there looking to pick a fight, I just ask that you think about what you’re fighting for. Does every conversation we have about the current status of Bay Area theater need to end in an online and/or offline shouting match in order to make a statement? I’m fighting but my war tactics differ. And I’m going to keep on my kindness train because it’s what I do. In any case, I’d like to think we’re still all on the same side and I hope this is a fight we can win together.

Ashley can cheer too.