Ashley attempts to explore the origin of this hilarious holiday.

April Fools’ Day. It’s become the new holiday I love to hate. The day this gullible blogger falls for one too many grand Internet schemes. 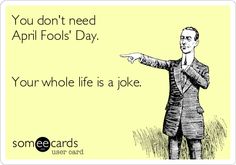 Even though, aside from Halloween, one could consider it an actor’s holiday. It’s a day centered around a whole lot of lies! And aren’t we supposed to be good at that?

It’s also the perfect time for pranksters to spread rumors about some more well-known celebrities. Which will often reappear on social media outlets after a few months forcing us all to fall for it again (no one should joke about Full House possibly coming back to TV). How did you guys enjoy yesterday’s jokes? Did you fall for Britney Spears being pregnant or Keanu Reeves and his remake of Citizen Kane?

Well, in the midst of all the horsing around (holla, Year of the Horse!), my need to research overwhelmed my Facebook desires (also, I hadn’t watched the highly anticipated series finale of How I Met Your Mother yet and wanted to avoid the spoilers). So I began to explore some of the origins of this sneaky day.

And unfortunately, the Internet wasn’t a huge help. No one seems to agree where or when it began. 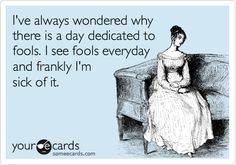 Many believe it’s thanks to France and their attempt to reset the calendar. Back in the 1500s, folks were undecided about when to pop that champagne (it is from France, after all) and make poor decisions at their New Year’s Eve bash. Some wanted it to be marked in January to follow the example of the Roman calendar while others believed the new year should be set by the start of a sunnier season: the spring. But as this decision wasn’t made immediately, it moved slowly through the population. And some people in rural areas continued celebrating in the beginning of April… thus becoming “April Fools” to those who scheduled their party in January.

But that story could easily be an April Fools’ joke of its own. There are other researchers who think the day came from spring festivals where pranking was just a general practice. These guys didn’t have the Internet so they had to entertain themselves in some way, right?! It’s also worth noting that April Fools’ Day falls around the time of other similar holidays, including both the festival of Hilaria and Holi. Most likely related to the words “hilarious” and “hilarity”, Hilaria also goes by the name of “Roman Laughing Day”. (Which, sounds like a BLAST.) Holi is celebrated in India as a way to acknowledge the new season; those taking part will often prank each other in good fun.

In any case, April Fools’ Day is something we continue to recognize. As news travels faster than ever, it’s become easy to prank almost any susceptible soul (so… me). And along with the havoc we Americans do with our fake pregnancy schemes, several European countries continue to celebrate it as well.

After potentially starting the tradition in the first place, those in France who get tricked are called a “Poisson d’Avril”, which if you’ve taken French in high school, you’ll know means “April Fish”. In fact, one common practice is to get a cut out of a fish and hook it to someone. Why a fish you ask? Well, that’s kind of unclear too. Perhaps it relates back to Jesus (because doesn’t it always?) who was often connected to fish or maybe it’s for those astrologers out there who know that fish relate to the zodiac sign, Pisces, which also falls in April.

In the end, whatever you believe about the potential origin of April Fools’ Day is up to you, pal. And how you celebrate it? Well, the jokester’s sky’s the limit! Any worthy pranks to share?