Will Leschber pens the blog’s first “in memoriam” with this week’s Working Title.

What is clear is that we, collectively, have lost something of great value. To the masses he was a high quality addition to franchise films (The Hunger Games, Mission Impossible III). To the frequent film fans he was someone with a ridiculous high bar for quality (The Master, Doubt, Synecdoche New York, Charlie Wilson’s War, Capote, Punch-Drunk Love, Almost Famous, Magnolia, the list is long…). To those who saw him live on stage, he provided unforgettable volatility and startling emotional immediacy (2000 revival of Sam Shepard’s True West, 2012 Broadway revival of Arthur Miller’s Death of a Salesman). To his friends and family, he was their beloved Phil. I’m sure he was also many more things to many more people. You know of whom I speak: Phillip Seymour Hoffman. He crossed from screen to stage and back again with ease. The caliber of his craft was rarely in question, however it was a quality of uncommon humanity that all of his characters inhabited that made his work hit even closer. This loss within the acting community will stay longer that most, I feel. There is something more personally affecting about Phillip Seymour Hoffman. The New York Times film critic, A.O. Scott, said it well when he said, “He may have specialized in unhappiness, but you were always glad to see him.”

As I look back on major periods within my creative development and personal history, PSH was always there in some capacity informing the fringes of my creative life. I caught the theatre bug in high school like most of my close friends.On multiple occasions I, and a friend or two, would ditch school to see Paul Thomas Anderson’s Magnolia. We must have done it three or four times. When I felt like taking a rebellious break from sixth period Government class, Hoffman’s endearing Phil Parma was there to reunite the estranged, misogynist men played by Jason Robards and Tom Cruise. My 17 year old self was entranced. PSH himself was quoted as saying, “I think Magnolia (1999) is one of the best films I’ve ever seen and I can say that straight and out and anybody that disagrees with me I’ll fight you to the death. I just think it is one of the greatest films I’ve ever been in and ever seen.” (IMDB) His phone call in the film attempting to find that long lost son taps the first crack in how that film breaks your heart.

In college, the first go round at least, I was pursuing a theatre degree in performance. One of the first scenes I worked on in Acting II was a piece from True West. My scene partner told me that these roles were played by Philip Seymour Hoffman and John C. Reilly the year before . To further make me feel out of my depth, he then said, “Yeah, they would switch roles every other night.” Inspiring. To toggle between vastly different characters with ease struck me with awe. PSH’s whole career is characterized with vast divergence of created individuals. We all wanted to be that good.

A few years later when I had left said college unfinished, I moved back home to Phoenix. Life having taken some unfriendly turns, I was working my way through depression. I had thrown away my academic scholarship, I no longer knew my purpose and my sense of self identity was blurring. I wouldn’t say it out loud but I was scared. I just felt so lost. I knew it still loved movies. They were a constant. Why not go see the new independent PSH film, Love Liza. For the few who saw this, you’ll know its not light viewing. I was in a dark period and PSH’s character in this film likewise was so. A.O. Scott in his article “An Actor Whose Unhappiness Brought Joy” remarked, “Hoffman’s characters exist, more often than not, in a state of ethical and existential torment. They are stuck on the battleground where pride and conscience contend with base and ugly instincts.” For those in low places of self doubt and self loathing, often PSH provided humanity and catharsis in a way that allowed audiences to feel akin to a fellow lonely soul. 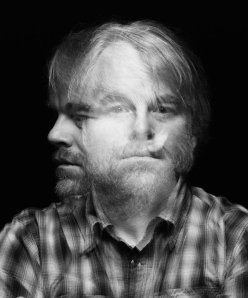 In 2012, when in a much healthier place, I took a trip to New York with my then girlfriend, now fiancée. As a college graduation present (yes, I took a long road to finish but eventually I got there), I was given two tickets to see the Broadway revival of Death of a Salesman. Upon arrival at the theatre, we were told that the tickets were for handicapped patrons and if we did not have someone in our party who fit that description we would have to pay an up-charge. Thank you very much StubHub. We had come all the way to see PSH’s Willy Lowman and Andrew Garfield (of Spiderman fame) in a show that we loved directed by Mike Nichols! Of course we would fork over the extra money. Geez. In the end those tickets were by far the most expensive I’ve had (upward of $700 all total) but the show was invaluable. The production remains to this day as one of my favorite theatre experiences. The play which I had seen and read many times before, simply cut deeper. For that experience, I am grateful.

Though I did not know him personally, his accessibility on stage and on screen made me feel like I did. My connection to the work of Philip Seymour Hoffman, like many of my friends, and I would venture most people who saw his work, is personal. He let us in. He allowed us access to the terrible sadness and fleeting joys in ourselves. Again I think A.O. Scott said it wonderfully when he said, “He did not care if we liked any of these sad specimens. The point was to make us believe them and to recognize in them — in him — a truth about ourselves that we might otherwise have preferred to avoid. He had a rare ability to illuminate the varieties of human ugliness. No one ever did it so beautifully.”

You will be deeply missed. Goodbye.