This week Ashley picks up from an earlier blog about eating her feelings and writing about it.

By the time you read this, I’ll be off on my honeymoon getting sunburn and probably eating too much at a complimentary buffet. But hey, that could be appropriate given I’m here writing about food again! 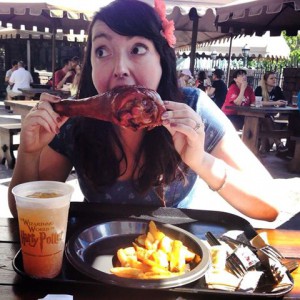 A few weeks ago, I shared some of the difficulty I was facing while working on my Olympians piece, Charybdis (or: Charlene’s Hungry). Don’t remember? Well you can reread it here: https://sftheaterpub.wordpress.com/2014/09/03/cowan-palace-lets-eat-our-feelings-and-write-about-it/

Oh, and I lied about the food poisoning part. Well, kinda. It was really “morning sickness” but I certainly felt (and still feel) that many foods have been poisoned for me throughout this pregnancy and that my entire relationship with food has changed.

But let’s get back to my play for now. In my previous blog, I mentioned that in order to finish my draft, I would force myself to attend an Overeaters Anonymous Meeting as it’s the setting to my piece. And boy, did I!

I should mention that I’ve had a pretty rough time with feeling nauseated throughout the past several weeks. And one of the things that helps balance it is snacking. Constantly. Even when eating is the last thing I want to do, if I can get myself to consume something, it’ll often help. Well, on this particular day, a few Saturdays back, I was suffering through some sickness. But knowing my time was running out to attend a meeting, I couldn’t back out. So I hopped on two buses and commuted an hour to the Sunset.

When I got there, I stood outside the building too nervous to go in; why hadn’t I thought about this earlier? What was I going to say if they wanted me to talk? Would I be honest? Should I try to be a character and put on an act? I let the minutes pass by while I attempted to get my story straight.

Since I’m a terrible liar (as Ashley Cowan; give me a character to play and I will confidently lie my face off!) I decided to just be as honest as possible without having to give too much of true self away.

I walked in and through a bigger meeting space to get to a smaller room. There, I saw five other women waiting patiently. The mood was quiet and thoughtful. Which immediately made me tense. We opened with the Serenity Prayer and then all the new people were asked to introduce themselves. I quickly decided against a fake name and went with my own when asked.

Next, we were informed that this was a “literature meeting” which meant we’d spend the majority of the meeting reading from a book, each of us taking turns to read a paragraph at a time. We were also told that the material we would be reading from was actually from Alcoholics Anonymous and that when we saw AA written, we should say “OA” so we could adapt it for our purposes.

Already, OA was starting to seem like a forgotten stepchild in an anonymous world. And I have to admit, I didn’t get a lot out of the readings. A lot of the material did not translate well for our needs and it just made the meeting feel sad.

Afterwards though, came the segment on sharing your experiences. I waited silently and shyly for others to speak. Those that chose to open up all came from different perspectives, which as an observer, was fascinating. Their stories were varied and their relationship with food ranged as well. After one woman spoke about being pregnant and having a difficult time managing the snacking required to fight her nausea in a healthy manner, I was inspired to speak up, if only to tell her she wasn’t the alone.

And though my voice was shaking a bit, I told them the truth. That this whole year, I’ve been struggling with food. From planning my wedding and calculating every calorie to trying to find peace with feeling like all that work is being undone as you gain weight to support another growing body. Food has been both my hero and my monster.

Which is certainly lending itself to my writing. But, working on this play has also brought back a lot of feelings from my childhood, when I really struggled with my body image. And maybe part of me is already fearing that I’m bringing a daughter into a world that can be quite cruel and that there’s a chance she may have to fight her own demons.

Growing up, I had always been a strong swimmer and spent my evenings doing laps with the swim team. There was both a threat and a safety involved in that. On one hand, I had to be in a bathing suit in front of my peers. That made me incredibly self conscious. On the other hand, there’s this beautiful weightlessness you feel when you’re swimming and I was actually really good at it. Needless to say, I’ve always been drawn to water so this Greek myth was even more of a personal pull.

After completing another draft of my script, I recently fell asleep and had a dream I was at a pool with beautiful people in attendance when a kid came up to me and said, “I bet you wish you were surrounded by people that look more like… you.” He was very judgmental and cruel in tone. I desperately started trying to defend myself to this small child saying, “I’m doing the best I can! And I’m pregnant!” but he just laughed.

The water, the critical feelings, the anger, the pain of it all just came rushing back. And I realized that this subject really may have been a bigger bite than I could chew. What that means for the piece is that while I have a completed draft of it, I’m realizing the story that came out ended up being bigger than a short. There’s more I want to say there, more I think I have to say at some point if I allow myself to keep swimming in it, but that time isn’t now.

This is not to suggest that I hope you skip the reading of it on November 22! The play is a beginning, a piece of more to come, but I’m happy to have a start and something to share. Heavily influenced by the meeting I attended and my own food demons, I hope you’ll be there in the audience to hear this take on Charybdis along with two other Greek monster tales.

Until then, see as many Olympians plays as you can! And be kind to yourselves. Because the truth is, if that insecure kid you may have been years ago could see you now, I’m sure they’d be pretty happy and proud of who you’ve become. 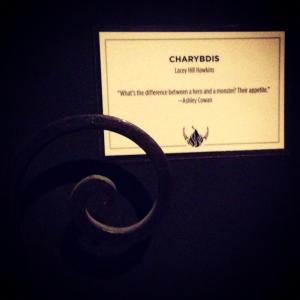 The 2014 Olympians festival will play 12 nights, November 5-22, Wednesday through Saturday, at the EXIT Theatre in San Francisco (156 Eddy Street). Tickets are $10.00 at the door, and can be purchased starting at 7:30 the night of the show.