Making theater means spending your life creating and re-creating other worlds onstage. Some of the tools we use to create these other worlds are abstract – language, gesture, spatial relationships. But there’s also a whole heap of tangible stuff that becomes part of the world of the play: sets, lighting, costumes, props. These items need to be carefully considered, and obtained, and maintained. October 2015 is Design Month on the Theater Pub blog, so, to kick things off, I asked friends and members of the community to share their favorite stories about props.

Playwrights have vivid imaginations, which means that scripts can sometimes require weirdly specific props. If a prop is mentioned in the stage directions but not the dialogue, you might be able to do without it, but if the characters discuss it, you’re probably on the hook for including it.

The Desk Set requires a plush rabbit that can conceal a bottle of champagne. In the production I was in this summer, we substituted a rabbit hand puppet, but it still caused some problems during a dress rehearsal.

Other shows require people to get more artsy-craftsy. Claudine Jones shared the following story on Facebook: “The plot of Angel Street literally hinges on a brooch that contains hidden jewels. The description in the script is so vivid, it’s almost impossible to fake. I set out to make a brooch that fit all these requirements: small enough to wear as an article of jewelry, easy to open and close, and able to hide “jewels” that are big enough to be recognized as such by the audience. A couple of weeks of trial and error, bizarre prototypes that went straight into the trash, and I finally succeeded. The main component was an old tuna fish can, painted gold, with a pin epoxied on the back and an overlapping series of metal triangles that formed a kind of iris that opened and closed. The “jewels”? 3mm ruby Swarovski crystals that shone like crazy. I think the playwright would have approved.”

The play Slavs requires a Russian-style icon of St. Sergius of Radonezh with the face of Lenin. When Dale Ratner directed this play in graduate school, he commissioned someone to paint the icon on salvaged wood – and still has it in his living room. Alandra Hileman has a similar story from when she directed the short play Overtones, in which the characters discuss an “ugly but expensive” lamp. After searching in vain for a suitable 1910s-era lamp, Alandra “assembled this from a candlestick, a votive holder, and an LED tea light for like $5 total. It’s lived on our mantle since then because my mom thinks it’s adorable.” 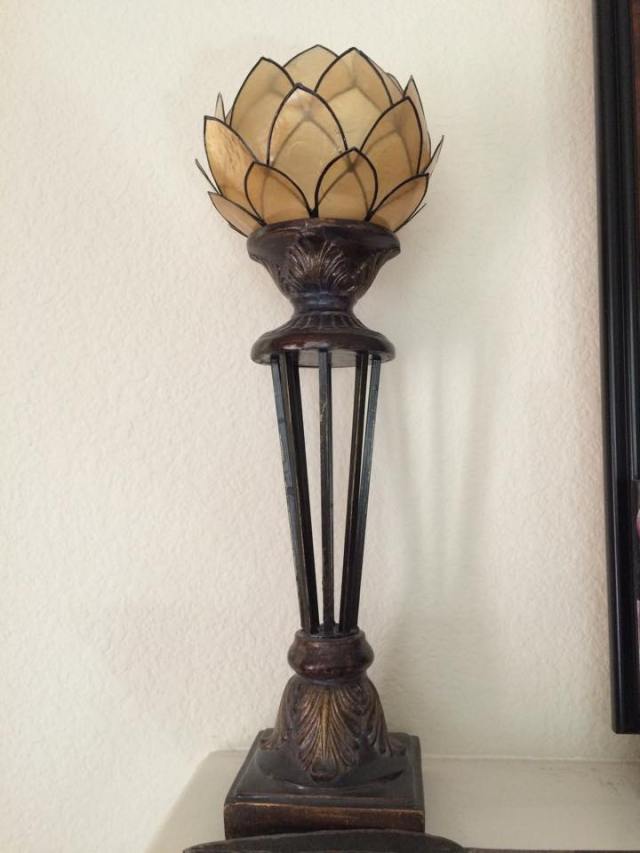 Ugly but expensive? More like cute and $5! Photo by Alandra Hileman.

Dale and Alandra aren’t the only people who’ve been known to take props home and use them as décor. For the last month or two of my freshman year of college, I lived with a stylized wrought-steel horse’s head hanging on the wall, because my roommate had been in a student production of Equus.

Theater is all about provoking emotion, and it can be either cathartic or harrowing to see something destroyed before your eyes. But what a nightmare it must cause for the props master! I’m thinking of plays like Sarah Ruhl’s The Clean House, where, at a climactic moment, the characters muss and dirty a pristine living room. Or, my friend Catherine Cusick shared the following story: “I did a play where a character pours a full bottle of vodka onto a MacBook laptop that we’ve seen working and being used for two hours onstage. My mom called me up out of nowhere during rehearsals asking if I still needed that. Turns out a neighbor had left a lookalike to the working laptop out on the side of her driveway. My mom walked right by and promptly swiped it.”

Speaking of finding props on the street… When I worked with director Katja Rivera on the production of my play Pleiades in summer 2014, I learned that she has what I call a “magpie superpower” – a preternatural ability to find cool and useful stuff on the sidewalks of Berkeley. This year, a record player that Katja found has starred in three productions in a row: Grey Gardens, at the Custom Made Theatre; The Desk Set, produced by No Nude Men; and The Real Thing, at Masquers Playhouse. You have to admit that’s a pretty snazzy resume – and such versatility too, going from the 1970s in the Hamptons to the 1950s in New York City to the 1980s in London without missing a beat! “Do I have an eye for talent, or what? I literally picked that baby up off the sidewalk, and he’s done three shows this year. Next stop Broadway!” Katja writes.

Katja’s record player got passed around between these three productions thanks to informal bartering and Katja’s generosity in loaning it out to friends. If a theater company maintains a proprietary stock of props and costumes, one can even more frequently see the same items appearing in multiple productions. Stuart Bousel recalls “a dress that appeared in five productions I directed in Tucson: a simple red ankle-length gown with a gathered bodice. It was made for a chorus member in Lysistrata, then used in the Oresteia, where it was worn by Clytemnestra. Then we used it in a comedy sketch about the Oresteia where it was worn by Cassandra, then in a production of Faust Part One, where it once again went back to the chorus, then a production of Salome, where it was worn by the Cappadocian (female in our version). I’m almost certain it was finally retired after that… but maybe not.”

In the first show I ever did in high school, I had a small role as a Russian noblewoman attending an opera, and got to wear a beautiful mink stole. I grew very attached to the stole and, later on in high school, basically insisted on wearing it again when I played Mrs. Luce in Little Shop of Horrors. It’s been over ten years, but in all likelihood, that stole is still being worn by teenage actresses at my high school. Though, if I’m honest with myself, I still think of it as “mine.”

Indeed, if you love a prop or a costume piece enough, you’ll find ways to keep reusing it. Catherine Cusick, again: “I worked with a theater in high school that made a papier-maché cow for a production of Into the Woods, but managed to slip it into any other show that could conceivably involve a cow on wheels.”

Marissa Skudlarek is a playwright, producer, and arts writer. She still wants a mink stole, especially now that it’s October. For more: marissabidilla.blogspot.com or Twitter @MarissaSkud.

Ashley’s got fire! Sometimes with heartburn and passion for women in theatre on the side.

As we wind down our month dedicated to passion, I recently found myself literally bumping into the subject in the book section of a thrift store in Fort Bragg.

Will and I were finishing our quiet weekend away by picking over a decent collection of theatre books and plays when I came across Lysistrata by Aristophanes. I clutched the tiny script close to my heart before exploring the pages. “Oh, I wish I could do this play again!” I loudly exclaimed, “I loved doing it in college but I feel like I’d bring more passion to it NOW!” 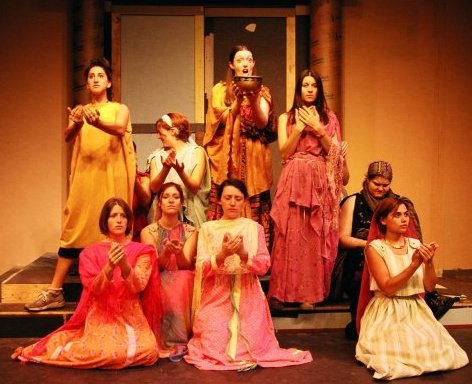 Ashley Cowan: demanding sex pledges from her homegirls since college

For those who are unfamiliar with the work, it’s a story about a woman who convinces her fellow lady pals to withhold sex from their sweeties so the fellas will stop waging war and consider a more peaceful path to resolving issues. Lysistrata is strong and passionate and just a true force. I was 20 when I was cast to play her in our Roger Williams University production and I adored the experience. But I was a kid who grew up in a small town and went to a small liberal arts college in New England; I wasn’t really that “fired up” about injustices going on in the world or between women and men. Mainly because I was just so focused on getting good grades and running our school’s theatre club. Maybe it’s just me getting older or being exposed to more of the realities outside of school, but I find myself getting much more fired up about issues that may have little to do with grades or theatre these days. And while I reread some of my old lines, I found they meant something different to me now.

Before heading to the register, Will handed me another book he thought I’d be interested in, entitled, Women In Theatre (edited by Karen Malpede). Like many great things, it’s from the 80’s (which you may be able to gather from the colorful cover) and it’s full of experiences from ladies all over the theatre industry sharing their stories and struggles. Sing it sisters! 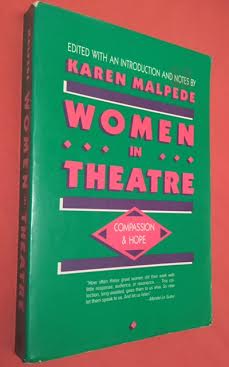 I was high off my Lysistrata memories and I was sold after reading the quote on the cover which states, “How often these great women did their work with little response, audience, or resonance… This collection, long-awaited, gives them to us alive. So now let them speak to us. And let us listen.” – Meridel Le Sueur. Plus, did I mention the sassy collection of bright colors? I added it to my already large pile and headed down to meet the cashier.

As he was ringing the items in he looked at the book and laughed. “This one’s been marked down to 75 cents from a dollar. I guess people don’t want women in theatre, huh?”

Then my eyes widened and flames erupted from them, lighting the entire thrift store in a destructive fire. My hair blew back like Beyonce’s would do and I stood strong, embracing my feminine powers, as the world around me burned. (C’mon, don’t you guys want to see me play Lysistrata now?)

I mean, sort of. I’m kind of hormonal so that’s what it felt like.

A book dedicated to women in the theatre was marked down from a dollar to 75 cents (before tax); last I heard, women still make something like 78 cents to every dollar a dude does in the workforce. C’mon tiny thrift store, why you gotta set yourself up for my scrutiny?

I mumbled a bit about how women have always been fighting for equal rights and as someone involved in theatre, I sure as heck wanted them around. But I left feeling irked wondering if I had offered to pay the extra quarter for the book if I’d feel better. This was one tiny store in the world who discounted a used book about women in theatre; was this even worth the emotions I was giving it? And what can I do about it? I mean, thanks to the Sony scandal, we’ve learned what we already knew: even Hollywood ladies are still often making a lot less than their male counterparts. So what hope does this New England gal living in San Francisco have these days and what can I do to feel better?

I don’t totally know. Someone help me here.