This week’s post is by cast member Julie Douglas, who examines the unique role of the audience in We Players’ production of The Odyssey on Angel Island. 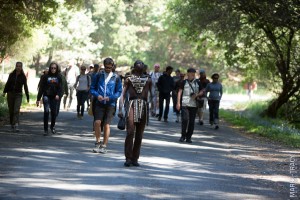 Telemachus (James Udom) journeys with his companions, the audience. Photo by Tracy Martin.

Audience is intrinsic and necessary to theatre. Theatre in its true form is about the direct relationship and dialogue between the story, the storytellers, and the audience.  Mainstream western storytelling has the audience sitting in the dark while the players, set apart upon a stage, spin the story both visually and verbally. Site-specific, experiential theatre changes that dynamic and understanding for both player and audience. The story is both imaginary and tangible, it is all around us and we are all active players in it. In “The Odyssey on Angel Island” not only are we asking the audience to emotionally and energetically follow the story, we are asking them to literally follow our hero and physically go on their own Odyssey in a living location. They are asked to take action, respond directly, and have interactions with the players and story. They are a part of the story, and their engagement helps drive it forward. 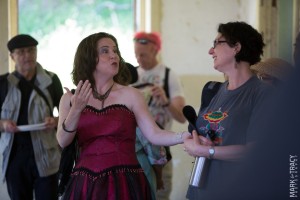 Julie Douglas — your fearless reporter — as Circe, engaging an audience member with her wily and “intensely seductive” ways. Photo by Tracy Martin.

In theatre there is always a conversation with each unique audience. Their energy can be felt on stage. It fills the room. Now imagine it filling an island. In this kind of theatre there are spoken conversations and shared experiences between the players and audience, between audience members and with the surroundings.  Shows that engage everyone in this way can change how audiences think of themselves and their influence. It can also help us as performers truly feel the necessity of the audience and inform our relationship to that audience in all forms of theatre. It is a high wire act that requires full commitment because you never know what might be thrown your way. You are looking your audience square in the face and know if they are or are not along for the ride.

In “The Odyssey on Angel Island” there are many miles walked with the audience, many scenes that have improvisation, and nature is an ever changing partner as well. How the show manifests, in many ways is dependent on that unique audience’s personalities and choices. In rehearsing the Odyssey we did our best to stand in for each other’s scenes as audience, to fill in those gaps of experience for both the audience and ourselves that would make up a large chunk of our show. We also made use of happenstance audiences that thought they were just coming to a state park for a picnic.  A family laughed as they got called out as rabblerousing suitors. A man on the beach bonded with Hermes by yelling out his approval. A group of boy scouts were drawn to our happenings, unexpectedly finding themselves a part of a scene. These joys and challenges of performing in a public space began in rehearsal, but something we couldn’t simulate was engaging with and moving an audience of over a hundred people to a point that they want to actively join in the story and enjoy it.

Our opening weekend started with an invited dress, then preview, followed by Saturday and Sunday shows. Our audience doubled each day, which was a great way to learn what these new partners might do as they grow in number. Of course each audience is and will be different and not just in size. This audience talks back, they want to participate in different ways and to different degrees, they challenge your engagement as a performer with unexpected questions and actions.  Making connections with these individuals as well as the group at large is key so that we fulfill our objectives not just with our fellow actors, but also with the audience that doesn’t know the script.  The skills needed to play directly with the audience will grow and change with each show. This is the truly exciting part that keeps the story alive now that the final partner is cast, the audience, and the reason why we do this, the ones with whom we share our gift of communal creation and wonder.

The audience joins in a folk dance on the island of Aolia (Camp Reynolds, Angel Island). Photo by Tracy Martin.

Julie Douglas can be seen running around Angel Island in “The Odyssey” as Athena, Circe, and other ensemble roles. She is a Bay Area actor, theatre-maker, clown, teacher, director and mask maker. Most recently she directed a youth version of…yep, you guessed it…”The Odyssey” and performed with Shotgun Players in “Road to Hades”. JulieDouglas.weebly.com

The Odyssey on Angel Island runs weekends through July 1. For reservations and more information, please visit www.weplayers.org. You can also “like” We Players on Facebook and follow us on Twitter @weplayers for more behind-the-scenes tidbits and the latest news.

Rebecca Longworth takes us on a voyage with the cast and crew of We Players’ Odyssey. Keep your eye on our blog for more updates from this unique production. Want to plug another group, artist or project from the Bay Area’s diverse small theater scene? Write us and let us know!

Welcome to Postcards from The Odyssey. This is the first in a biweekly series taking you behind the scenes of We Players’ current production, The Odyssey on Angel Island, playing May 12 – July 1 at Angel Island State Park.

It seems as though whenever I talk about this show, someone asks if there’s an ampitheatre on the island. Nope – this Odyssey uses the entire island as a stage: we actors get plenty of exercise running amongst the spectacular natural environs, historic buildings, and decommissioned military installations of Angel Island. The audience will follow us hither and yon, on foot or bike – or, for those that need it, there’s a special vehicle on selected days. They’ll also interact with the performers in many scenes, so some of our rehearsals seem to consist of chatting with imaginary friends while we eagerly await the addition of audience members!

As you can imagine, staging a play on a 742-acre island is an enormous undertaking. Members of our production team take trips to the island throughout the week, and our site manager, Dave, actually lives there full time. Each weekend the performers (12 actors and 7 to 10 musicians) join the production team and volunteers on the island for two days of rehearsals. We arrive Saturday morning, rehearse during the day, and spend Saturday night so that we can rehearse Sunday starting in the morning. We take ferries from San Francisco or Tiburon to get to the island, and sleep in bunk beds in a dorm or outside in tents. It’s kind of like summer stock meets summer camp, with spectacular views of San Francisco and geeky mythology references. Luckily, we all like each other a whole lot. But life on the island could be a post in itself… (hint).

Right now, I’m excited to share with you some fabulous shots of a recent rehearsal, taken by our most excellent photographers, Mark Kitaoka and Tracy Martin. They’re some of the most fun and friendly people I can think of to spend a chilly Saturday with, and they take gorgeous photos! We have a production-photo-shoot this weekend, and I’m totally jealous that I’m not one of the lucky ones donning costume and looking artfully intense for the camera.

Here we’re rehearsing a scene in the old military hospital near the East Garrison. Julie Douglas, playing Circe, is talking to our director, Ava Roy, about a ritual her character will perform with Telemachus (James Udom, who’s in the tub). Note the fabulous golden bathtub!

Natty Justiniano looks to be deep in thought in one room of the hospital. Or he could be checking Facebook. 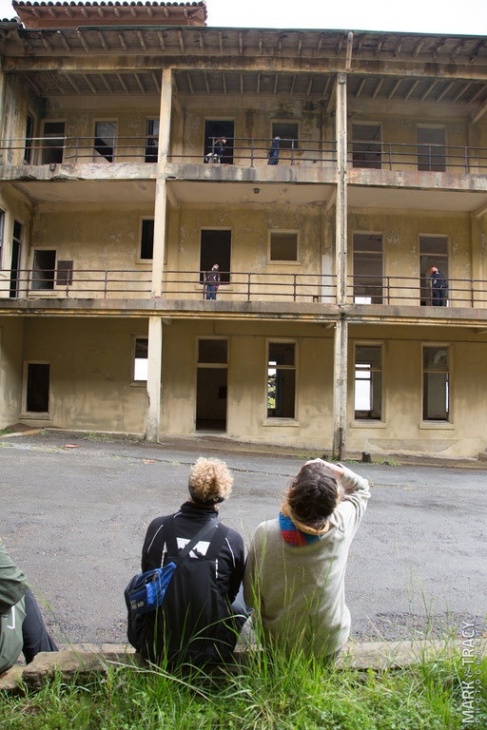 Maria Leigh, Libby Kelly and Caroline Parsons – playing sweet-voiced nymphs – rehearse with music director Charlie Gurke in the old Fort MacDowell military chapel. The military used the chapel to offer services of all varieties; we’re creating a shrine to Athena in it.

Actors visible through a window in the hospital. 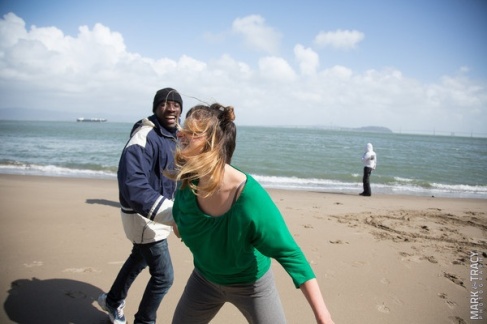 Caroline as Calypso and James as Telemachus frolic on Quarry Beach while Ross Travis as Hermes determines how best to deliver a message from Zeus. It’s always a beach party with Calypso. And Hermes usually has bad news. Couldn’t you just look at that view forever?

More song rehearsals at Quarry Beach. Here you can barely make out Maria’s arm behind James, and three of Joan Howard’s limbs behind Charlie, who is playing his awesome and very portable melodica. Ava looks like she’s giggling at something; and there’s Claire Slattery and Caroline Parsons laughing as well. In this scene Caroline plays the nymph Calypso, with backup from other Oceanid nymphs, played by the other ladies.

Rebecca Longworth plays Eurycleia, Hera, and Anticleia – among other roles – in The Odyssey on Angel Island. When not performing, directing, or producing, she creates motion graphics for Truc Designs, Inc. Rebecca recently directedBuried Child for Boxcar Theatre, and occasionally blogs about her goings-on at www.rebeccalongworth.wordpress.comor tweets (more frequently) @directorebeccer.