The Pint-Sized Plays have their 4th performance tonight! We continue our series of interviews with the festival’s writers and directors by speaking to writer Christian Simonsen and director Alejandro Torres of “No Fault”! (Alejandro also served as the Deputy Producer of Pint-Sized this year.)

“No Fault” introduces us to Jack and Kate, a divorcing couple with an 8-year-old daughter, who’ve scheduled a quick meeting in a corner bar to sign their divorce papers, make it official, and try to put the past to rest. Colin Hussey and Lisa Darter play the couple. 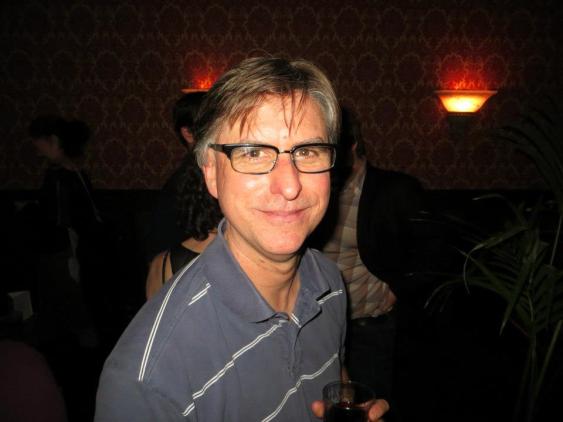 What made you get involved with Pint-Sized this year or, if you’re returning to the festival, why did you come back?

Christian: I have been a fan of the Pint-Sized Play Festival since the beginning, and I was honored to have an earlier short play of mine, the comedy “Multitasking,” produced by this festival in 2013. I love immersive, site-specific theater like this, where the actors rub shoulders with the audience. That’s not just an expression… if you come to this show, a drunk llama may literally rub your shoulders!

Alejandro: I love this theater company and all the fresh work they bring to San Francisco (and on a monthly basis too). I’ve directed and performed with them before and have also met some great and talented folks that keep me coming back.

Christian: The challenge to writing a short play is to remember that it’s not a full-length play crammed into a few pages. That may sound obvious, but it’s tempting during the writing process to forget that. It generally can only be about one thing. Every word of dialogue, every prop, every stage direction must earn its keep. A full-length play can survive three or four weak scenes. A short play has trouble recovering from three or four weak lines of dialogue. As a general rule, a short script can’t really handle numerous subplots crisscrossing each other, but it should also avoid being a “mood piece” that just sits there.

Christian: Its purity. Audience members rarely walk away from a short play with mixed feelings; it either worked or it didn’t. As a writer, I’m most productive when I’m given boundaries and limitations, and the short play format fits the bill perfectly. For example, in “No Fault,” a separated couple are going through the awkward, tense ordeal of signing their divorce papers in a pub that they used to frequent during happier times. The stage directions have both actors sitting at a table for most of the script. But when the woman delivers the most intimate line of dialogue to her now ex-husband, she is standing away from the table while the man remains seated. The ironic contrast of their emotional closeness and their physical distance would be lost (or at least watered down) in a longer play where the actors would be moving around for two hours, willy-nilly.

Alejandro: Simply getting it all together as producer and table work as a director.

Christian: That’s tough, because I try and make it a point not to picture celebrities, whether world-famous or local, when I create characters. My goal is always to write a character that is solid and fully-formed on the page, while still leaving enough wiggle room where an actor can put their own spin on him or her. That being said, for this script I could picture actors Mark Ruffalo, Elden Henson, John Hawkes, Maggie Gyllenhaal, Amy Poehler, Sandra Oh.

Alejandro: Hmm… Maggie Cheung and Joaquin Phoenix. I they would make for an interesting dynamic.

Director Alejandro Torres shows off his dramatic side.

Alejandro: This is cheating as I have worked with these two before but have never directed them: Genevieve Perdue and Alan Coyne.

What are you currently working on/what’s next for you?

Christian: I was one of the staff writers on Killing My Lobster’s August sketch comedy show Game of Nerds, which was a lot of fun to work on. My next project is a collaboration with the multi-talented Sean Owens. We are developing a comedy web series called Under the Covers, which will be both hysterical and educational (or at least one of the two).

Alejandro: The SF Fringe Festival this September will be my next project. I will be remounting an original piece called Projected Voyages about dreams, nightmares, and passing thoughts.

What Bay Area theater events or shows are you excited about this summer/fall?

Christian: I want to see Barry Eitel’s The Ice Cream Sandwich Incident. I’ve always admired Barry as an actor, and I’m anxious to see what he does as a playwright. It also stars two of my favorite local actors, Becky Hirschfeld and Paul Rodrigues. And producer Stuart Bousel’s San Francisco Olympians Festival in October is always an exciting event that features new plays by Bay Area writers.

Christian: Stella Artois, but I will happily endorse another brewery if they give me their product or money or both.

“No Fault” and the other Pint-Sized Plays have 2 performances remaining: August 23 and 29 at 8 PM at PianoFight!