Marissa Skudlarek follows up Ashley Cowan’s piece from yesterday with her own tall tales.

September, 2000. I am a 13-year-old high school freshman who dreams of theatrical stardom. My local community theater is holding auditions for Annie, seeking girls between the ages of 7 and 13 to play the orphans, and I beg my parents to let me try out.

“Okay,” they say, “but you realize you haven’t got a chance, right? The orphans in Annie need to be cute kids, but you don’t look like a cute kid anymore – you’re too tall.”

At 13, I am about 5’6”, a few inches below my final adult height of 5’8”. I argue that there are plenty of real-life 13-year-old girls who are 5’6”, and it stood to reason that one of them could’ve been in a Depression-era orphanage. There was nothing wrong with that logic, except that casting has its own shorthand. The orphans in Annie have to be cute kids, and the easiest way to convey that a character is young is to cast someone short.

If I’d been cast as a 5’6” orphan in Annie, my idea was to play the role as surly and truculent and resentful – since I’d be playing the oldest orphan, the one who’d been there the longest. Even as a young girl, I guess I’d absorbed the idea that tall women often play the bitch or the villainess. “I feel like unless I ask to read for a certain role, I am going to be handed sides for the ball-buster/ice queen/bitchy lawyer part,” says local actress Erika Bakse, 5’9”. “I don’t generally mind this because they are pretty fun roles — there’s a reason the majority of quotes in the recent New Yorker article about The Real Thing came from Charlotte, who is in only 3 scenes of the play. But it would be fun to get the opportunity to show other sides of myself. Interestingly, the one time I got to be more of an ingénue was in Stop Kiss, with a shorter Callie opposite me. Bisexuals/lesbians can be any height, I guess.”

(Full disclosure: last year, Katja Rivera and I cast Erika as a ball-busting feminist in my play Pleiades. Erika’s character was also supposed to be the oldest of the eight young women onstage, and her height probably helped her read that way to the audience, too.)

On this blog, we often talk about the difficulties facing female actors: too many aspirants and not enough roles. In such an environment, anything that makes a woman “difficult” to cast can turn into a permanent handicap. I therefore wonder how many tall women get dissuaded from acting, if prejudices along the lines of “The leading man always needs to be taller than the leading lady” mean that they’re not cast as frequently as their shorter sisters. By the time I got to college I was pretty sure that the odds were against my making it big as an actress, and I felt like part of that had to do with my height.

At the same time, college was when I came to terms with my height, and started to take pride in it. Instrumental in this was seeing Cate Blanchett play Hedda Gabler, in a production that began with a dumb-show in which Blanchett stalked around the stage for a minute or two. The stage was dimly lit and I was seated in the back row of the balcony, but Blanchett’s stage presence astounded me: her elegance, her dignity, her power, her height. Like me, she is 5’8″. I draw on my memory of her performance whenever I need a jolt of self-confidence about being a tall lady. 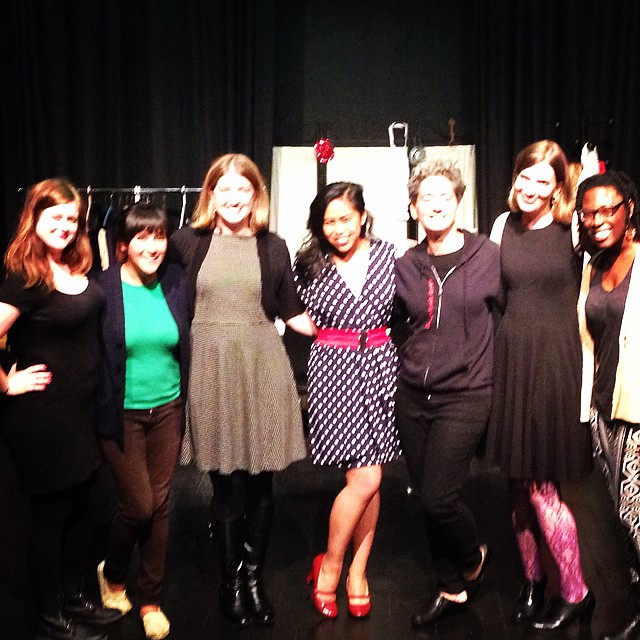 Me and the Desk Set ladies on audition night. Even slouching, I’m still taller than everyone.

This year, when I played Elsa in the comedy The Desk Set, my four-inch heels and bouffant blonde wig made me the tallest person onstage. And there were several moments where my height became part of the joke: in my stage kiss with Alan Coyne (who commented that the wig and heels made me very intimidating); when I stared down my romantic rival, played by the petite brunette Kitty Torres; when I danced the tango with Andrew Calabrese, my breasts at the level of his eyes. It was fun to use my physicality in this way, though if I think about it too hard, I can start to have qualms: does this mean there’s something inherently ludicrous about tall women? And it seems less likely that I’d be asked to kiss a shorter actor in a scene that was meant to be earnest rather than comical.

Some roles are specifically earmarked for tall actresses. I get annoyed when women of average height play Rosalind in As You Like It, because the reason Rosalind gives for dressing up as a boy is “I am more than common tall.” And the catfight between Hermia and Helena in A Midsummer Night’s Dream is a short-girl vs. tall-girl classic. (After our scene in The Desk Set, Kitty Torres and I are now hoping that someone will cast us as Hermia and Helena. Producers, call us!) Overall, though, in classical theater, there seems to be an unspoken rule that young actresses play ingénues and middle-aged actresses play queens. The difficulty is that we tend to think of ingénues as petite and queens as statuesque.

Local actress Valerie “Three-Time Helena” Weak, who is 5’10”, has these stories and tips:

I don’t think I’ve ever played opposite someone in a romantic onstage relationship who was shorter than me. I’ve definitely dealt with callbacks where we were paired according to height (like when none of the taller Noras got to read with the shorter Torvald) – and that happens even more often when they’re putting together ‘families’ or ‘couples’ for a callback at a commercial.

I’ve learned to make sure I wear flat shoes when I audition for shorter male directors – I’ve definitely had audition situations where a shorter male director is put off by my height in general. I also know to ask costume designers for rehearsal shoes ASAP if I’m going to be wearing a heel in the show – not so much for me to practice walking in them, but for the men who will be working with me to get ready for how much vertical stage space I’m going to take up, rather than that being one more thing for them to adjust to in tech week.

Let’s go back to 13-year-old Marissa. In the middle of writing this article, I procrastinated by rereading some old emails I sent to my high-school acting teacher, and happened upon this amazingly pertinent quote:

I was complaining to my mom about this and she said I should ask you. I read in Vanity Fair that this hot new talent, an 18-year-old actress called Anne Hathaway, had wanted to do Broadway but wasn’t cast because she was too tall. Her height? 5 foot 8. What I wanted to know is if, in your experience with various shapes and sizes of actors, height is a hindrance to actresses if they want to get cast. Because it would absolutely suck if that were the case. So superficial.

Even as a teen, it seems, I was worried about the plight of being a tall actress. My teacher responded with these words of wisdom:

The theater world runs the gamut from directors and agencies that cast specifically for looks, to directors and agencies that cast based on talent, and everywhere in between. Is your cousin dating the casting director? Did you schmooze with the right people? Has so-and-so told what’s-their-name about whozit who mentioned your work to the director? Did you perform remarkably? Was your audition scheduled after the director had a fight with his/her boyfriend/girlfriend? So many factors figure into casting that it is best to just do your best. Let the rejections roll off your back, and the acceptances be wonderful surprises. Height, weight, skin color, gender… there are a few things with which you are born… worry about the elements under your control. Are you well-rehearsed? Have you worked on making your instrument the best it can be? Did you sleep enough last night? Do you have good relations with your family and friends?

Which seems like good advice for anyone, be they old or young, male or female, short or tall.

Marissa Skudlarek is a San Francisco-based playwright, arts writer, and sometime actress, who enjoys playing the “Am I The Tallest Person In This Elevator” game whenever she’s at her day job. For more: marissabidilla.blogspot.com or @MarissaSkud on Twitter.