Marissa Skudlarek had some pressing (but glamorous) business yesterday so her column is coming to you on Friday this week!

I used to think that those accounts of how crazed people became over theater in the olden days — you know, stories about how hit plays created new stars, launched trends and fads, had their tickets become the hottest commodity in New York — were overstated, but then Hamilton came along. Hamilton mania is everywhere: Lin-Manuel Miranda is on the cover of Rolling Stone, half of the people I know have a crush on a Hamilton cast member, the show has won nearly every possible award and is about to take its victory lap at the Tony Awards (or, as we must call them, the #Hamiltonys). 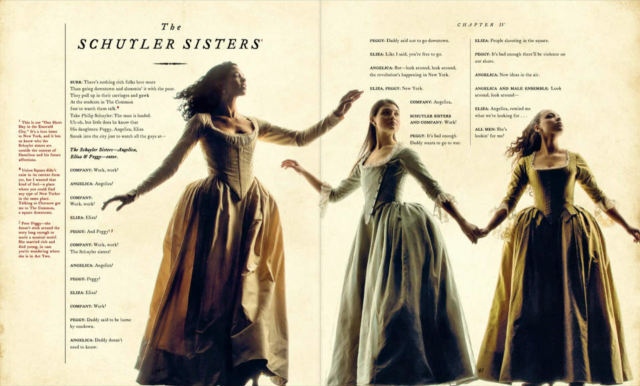 I’m kicking myself for not having bought Hamilton tickets and planned a NYC trip to see it as soon as I felt the beginnings of this mania happening, so in the meantime, like thousands of other Americans, I’ve had to experience the Hamilton craze from afar. First by listening to the cast album, then by teaching myself how to play “You’ll Be Back” on the ukulele (try it, you guys, it is a GREAT ukulele song), then by reading the Hamiltome, the new behind-the-scenes coffee-table book. (Yeah, its official title is Hamilton: The Revolution, but no one is calling it that.)

So let’s discuss the Hamiltome. First of all, know that it’s a beautiful object, with a design inspired by Revolutionary-era pamphlets and typography. Because Lin-Manuel Miranda is a huge nerd, there are even occasional images of the historical documents that formed part of his research. And there is a rich supply of photos from the show itself, depicting just about every scene, unafraid of spoilers. I was absolutely mesmerized by a shot of Eliza (Phillipa Soo) at Philip Hamilton’s deathbed, with a single perfect tear trembling on her lower eyelid. There are handsome black-and-white daguerreotype-style photos of all the lead actors. There’s a candid shot of Daveed Diggs in his underwear (Page 151).

In terms of content, the book features the full text of the show, with annotations in the margins from Lin-Manuel Miranda, interspersed with chapters by Jeremy McCarter describing Hamilton’s creation, collaborators, and the first months of its impact on the world. One of the nicest aspects of this is how much attention the authors pay to Hamilton‘s design elements, praising the contributions of the behind-the-scenes personnel just as effusively as they praise the work of Hamilton’s iconic original Broadway cast. Clearly, the creative team has considered every detail and gesture and prop, and their meticulousness gives us all something to aspire to.

For those of us who downloaded Hamilton‘s cast album and still appreciate physical media, it’s great to have a full copy of the show’s lyrics, instead of having to look them up on Genius.com. Miranda’s annotations are full of enthusiasm, gratitude, and good humor. He’s open about the parts of the show that make him cry, the lines he’s proudest of, the parts that are challenging to perform. Additionally, if you are interested in writing stories based on historical events, the Hamiltome provides a lot of food for thought about how to shape history into a rich and thrilling drama.

Indeed, Hamilton is intimately concerned with historiography and the process by which facts become legends: “Who lives, who dies, who tells your story?” As such, it’s important to look at what the Hamiltome is trying to do, how it is trying to shape the narrative that surrounds this already-legendary show. Really, Hamilton’s reputation doesn’t need any more burnishing, but the Hamiltome tries to do that anyway. It’s a blatant piece of historical myth-making that tips into hagiography. Jeremy McCarter’s chapters try to put Hamilton‘s achievements into a historic context, but sometimes overreach. Describing how Alex Lacamoire listens to Lin-Manuel Miranda’s demo recordings, creates orchestrations, and then discusses what he’s done with Miranda, McCarter writes “It’s a very American pastime, this interpreting and discussing. Our musical culture is built on standards, songs meant to be reworked endlessly, such as ‘Blue Skies’ or ‘Summertime.’ And it’s not just our music: Think of the blood we’ve spilled looking for the best expression of ‘All men are created equal’ or ‘Congress shall make no law…'” Lacamoire is a very skilled orchestrator, but this seems like a ridiculously overblown way of describing what he does in his job.

Lin-Manuel Miranda obviously loves and admires and identifies with Alexander Hamilton, but because he is a talented dramatist, he also knows that 2.5 hours of a show that goes “This historical figure was so awesome!” is really boring to watch. Therefore, he is careful to give Hamilton flaws that balance his virtues; many of the other characters in the show think of Hamilton as an annoying, hot-headed motormouth. Jeremy McCarter’s Hamiltome chapters lack this kind of nuance; they’re the equivalent of a musical that just wants to tell you how awesome its hero is, a Hamilton without flaws. Their hyperbole becomes predictable. I found myself growing less and less interested in them, and more and more interested in the lyrics and Miranda’s annotations.

Act One of Hamilton is about war, Act Two is about politics, and the show explicitly states that “winning is easy, governing is harder.” It wasn’t easy to create Hamilton; it took six years of effort and the contributions of a lot of talented people. (NB: the battles of the Revolutionary War also lasted for six years, 1775-1781. I’m surprised that Jeremy McCarter doesn’t think to make that comparison.) But what will be even more difficult, and complicated, and interesting, is the effect that Hamilton will have on the American theatrical landscape, and how Lin-Manuel Miranda will possibly follow it up, now that “history has its eyes on him.” I wonder how we’ll be talking about Hamilton in twenty years. With King George, I wonder: “What Comes Next?”

Marissa Skudlarek is a San Francisco-based playwright and arts writer. Her favorite Schuyler Sister is Angelica. For more: marissabidilla.blogspot.com or @MarissaSkud on Twitter.