Theater Pub Artistic Director, Julia Heitner, talks about what it’s been like for her to put together this year’s Pint-Sized play festival. 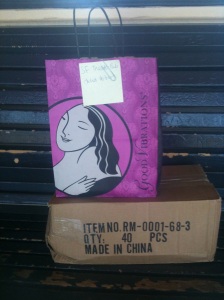 Last week I had the honor of picking up a package of toys from the Good Vibrations warehouse in San Francisco’s SoMA district. Good Vibes has graciously donated for a new play I’m directing for Pint Sized Plays III, Put it on Vibrate, by Tom Bruett, featuring the acting talents of Kirsten Broadbear and Maggie Ziomek.

After riding home to Oakland with my shopping bag of sex positive swag open for any passerby to see, including the group of BART police next to me (I wonder if they got a peek?), I unpacked everything and snapped some photos of each prop to send off to the playwright, concluding that this was “pretty much the weirdest email I have ever sent someone.”

These may be the first props for a show that have genuinely made me blush, but it is not unusual as an indie theatre director to be on the hunt for less-than-conventional stage props. For the first Pint Sized plays, in 2010, the play I directed, Queen Mab in Drag, by Stuart Bousel, called for a diamond snail ring, and a fairy princess costume for a man (worn very well by Rob Ready). After wondering what the heck a diamond snail ring was, I thought, “I’ll have to make one!” Out came the Sculpey clay and paint.

For Ashley Cowan’s play, Word War, part of PianoFight’s ShortLived, I created a giant iphone/ipad out of cardboard and tape for a dream/dance fight sequence. I also ended up making custom t-shirts for M.R. Fall’s play, Test Preparation, when it was included in BOA X. I’m proud to say the playwright and I designed these ourselves!

For me, part of the fun of putting on theatre with a small budget is finding a way to bring interesting props to life with a bit of glue and paint. Although homemade clay versions of sex toys would have provided a fun and interesting challenge, I am very grateful to Good Vibrations for donating props that we otherwise could not afford in order to bring Tom’s play to life.

I’d like to maintain some element of mystery, so I haven’t posted any pictures of the props. To see what Good Vibes has donated for Put it on Vibrate, plus nine other original short plays by some fantastic local playwrights, you’ll have to come see the show!