This week Ashley Cowan talks about taking on a role with some history.

It’s a question every actor faces when accepting a role that has been performed before: why me, why here, why now? Or at least I do. Because unless it’s a world premiere, the part has been played already and sometimes stepping into footsteps that are not your own can be a tricky business.

Maybe it’s been done just once before, maybe a million trillion gazillion times before (remember that summer in 2011 when everyone and their mom put on a production of Twelfth Night?) so it’s no secret that you run the inevitable risk of being compared to those who came before you.

And this summer, I’ve found myself having to embrace this idea. I’m beyond delighted to be performing in Custom Made’s Book of Liz with three talented and hilarious other actors (with a preview tomorrow night and our opening scheduled for Friday). But I have to admit; I’ve been a bit terrified of the role.

Not because the part is challenging; consisting of six different characters in a fast-pace, high energy, comedy. But because two years ago, a close friend of mine played it on the exact same stage. Let’s call her Gallison Gage! Crap, no. She’s much better at making up fun aliases than I am… Anyway, Allison’s performance was memorably dynamic and strong so my fear kicked in immediately, imagining audiences with rotting tomatoes waiting to be thrown at the dud who tried to live up to the past.

The interesting thing is, Allison and I have traveled this territory before. Kind of. We met over five years ago when she joined the cast of Tony n’ Tina’s Wedding. She was first hired to cover bridesmaid extraordinaire, Marina Galino; the role that I had been covering for the past few months. I was going on to play Terry, the nun-in-training, as she began making Marina memories. And I’ll admit, I had a hard time letting the part go! I had originated the current San Francisco role of Ms. Marina so I was very protective of it. But it was the nature of the show, and maybe the nature of show business in general, that you can’t be clingy for long and we were forced to learn quickly that each performance would be different. Everyone brought a new energy, a varying perspective, and their own “thing” to it. After a few months, we were both playing a series of different roles, and by the end of the run (years later) we had played virtually every female part and kissed many of the same people along the way (but that’s another blog all together). In the process of makeshift changing areas in stairwells, sharing costumes, and perfecting the use of hairspray and blue eye shadow, we became friends. 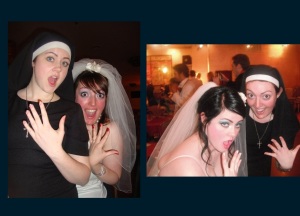 Here we are playing Tina and Terry. And Terry and Tina. When we switched parts a week later we wanted to capture the same picture as different characters for our selfish enjoyment alone. Friends forever!

So when I was asked to audition for the 2013 production of Book of Liz, I went to Allison first. (Well, after I texted her about something Bachelorette related. We still can’t believe Mikey T. is no longer in the running! It’s so wrong!) And before accepting the part, I had to make sure that it wasn’t going to be weird for us considering she had just done it two years earlier (while I was in one of the many productions of Twelfth Night). Although sharing roles was something we had become acquainted to, I remember how much work Allison had put into her Book of Liz and the many conversations we had about it. When she offered her support in me taking the role, I was excited but the fear followed close behind. Fear that I couldn’t compete with the past.

And I’ll be truthful. We’re all friends here, right? That fear has weaseled its way into our rehearsals from time to time. It’s become a slightly sore subject for our current cast to be constantly compared to the last cast. Our production process has been fast and furious so often we’ll hear, “well, when this was done two years ago…” as means of figuring out how to solve a problem. Which unfortunately doesn’t always provide an appropriate answer for a group trying to create their own identity.

On top of that, since Allison and I can sometimes roughly fit into some similar costumes, I’ve been awarded many of her old pieces and I can’t help but worry that everyone will be expecting me to make all of the same choices she did and will end up disappointed when I don’t.

Please don’t get me wrong. I love having this opportunity and I am so grateful to be working with a cast and crew who make me laugh each day and push me to be better. But I can’t help but wonder if this is an obstacle many other actors are facing. How do you make your role special and unique when you’re following in someone’s footsteps? And how do you move beyond those thoughts to just get out there and try your best?

I think what I need to remember from my Tony n’ Tina days is that different doesn’t have to mean better or worse. It can simply just be different. The energy we’re bringing to the theater will undoubtedly be changed from the past production and that’s okay. We’re not aiming to be better than any other cast, we’re striving to run a solid show and make people laugh.

And I’m sure that’s the conclusion many other groups come to when they’re involved in a show that an audience may have seen numerous times before. We’re not inventing the wheel here but actors across stages everywhere still have the opportunity to pour their passion into a role as only they can and for that I couldn’t be more thankful. It’s so easy to get into the frame of mind that everything is a competition. In a competitive industry, I think it’s an easy leap. But if you get caught up in who is winning, you ultimately lose the chance to leave a footprint or two of your own.

And while I’m still battling my own private fears (well, I guess you now know about them reader, but you can keep a secret, right?) and trying to find my own way, I hope that Allison (and others!) will come see the show and allow this current cast to take them on a new journey of an old story. (And then we can go out to froyo as that’s something that Gallison Gage and I are great at!)

In any case, I’d love to know your thoughts. How do you go about acting/directing/producing/etc. a show with a history? Does it impact your choices during the process? Does it forever change you as an audience member when you see someone else doing a show you once worked on? And what’s your favorite flavor of froyo?! This gal needs to know! It would be swell to see you and discuss this further at Custom Made Theatre during the Book of Liz run or at Theater Pub’s newest installment of Pint Sized Plays. And I look forward to spending the rest of the summer in the company of San Francisco Theater.