After The Desk Set closed two weeks ago, I was pretty sure that my summer-of-2015 flirtation with being an actor had ended. I truly enjoyed the experience of acting in a play again after seven years, but I wasn’t sure where to go next. I’m well aware that there are more talented 20-something female actors in the Bay Area than there are roles for them, and, as I wrote in a comment to Ashley Cowan’s post on the same subject, I am philosophically opposed to audition monologues.

Well, never say never, I guess. A week ago, I opened up my inbox to find an email from playwright Jeremy Cole, saying that the actress who was originally supposed to perform his piece in the “Repro Rights – Women @ Risk” theatrical benefit had unfortunately had to drop out. Would I be interested in replacing her in the role of Virginia Woolf, delivering a monologue called “A Womb of One’s Own”?

I’m always up for a challenge and I know how much of a headache it is to lose an actor a week before the show, so I said yes. Wow! To go from playing a Marilyn Monroe-esque sexy secretary in The Desk Set to playing a Bloomsbury bluestocking of famously formidable intelligence… well, no one could say I was being typecast, that’s for sure. It was a nice reminder of the reasons so many people go into acting in the first place: to be able to take on roles that are very different from one another and from their real-life personalities.

Furthermore, because I am a good deal younger than the actress who was originally cast in the role, it’s a nice reminder of theater’s flexibility, how the same role can be played by different types of people. One does tend to think of Virginia Woolf as a middle-aged woman (perhaps because she published most of her best-known works when she was in her 40s) but why can’t she be played by someone younger? I started to research the twentysomething Virginia Woolf and even to identify with her. In 1909 (when Woolf was 27, and unmarried, and still named Virginia Stephen), Lytton Strachey wrote to Leonard Woolf: “You must marry Virginia. She’s sitting waiting for you, is there any objection? She’s the only woman in the world with sufficient brains, it’s a miracle that she should exist; but if you’re not careful you’ll lose the opportunity…She’s young, wild, inquisitive, discontented, and longing to be in love.” I would be thrilled if someone wrote such words about me. 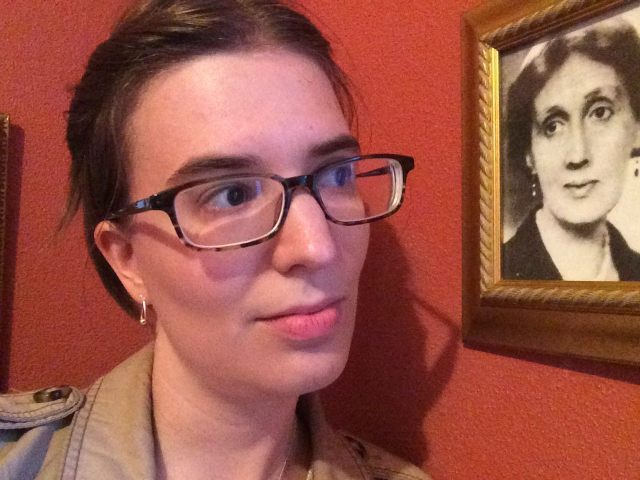 But each new role brings challenges. If my role in The Desk Set was about becoming confident with my physicality and sexuality onstage, this role is about becoming comfortable with doing a monologue, a one-woman show. Never before has anyone asked me to fill eight minutes of stage time all by myself, and that can feel daunting. My role in The Desk Set was quite small — I think I had 10 lines, meaning that when my scene partner and I accidentally dropped a line on opening night, I later teased him about making me mess up “10% of my role.” With “A Womb of One’s Own,” it’s just me out there — and I’m opening the show!

My opposition to audition monologues mainly comes from the awkwardness of being asked to deliver a speech to the empty air, whereas if you were actually performing that monologue in a play, you’d most likely be speaking to another actor onstage. Fortunately, “A Womb of One’s Own” is written as though Virginia Woolf is giving a lecture at a college, which relieves much of that awkwardness. Instead, the challenge is to be more than just a “talking head.” The words of the monologue, and the point the Woolf character makes about women’s bodily autonomy, are very important, but I have to remember that this is a play, it isn’t an actual lecture. As such, I have to act the text rather than merely speaking it. This isn’t always easy. There are still moments where I’m not sure what to do with my hands.

I believe this is also the first time I’ve been asked to play a real-life historical figure, rather than a fictional character. As such, I dove into doing research. I found a clip of Virginia Woolf’s speaking voice, featuring one of those fluty, cut-glass English accents that don’t exist anymore. I realized I’d have to brush up my RP accent: I looked up resources on pronunciation and phonetics, and underlined words in the script that I thought might be tricky. I rewatched The Hours – one of my favorite movies when it came out – and paid close attention to Nicole Kidman’s acclaimed performance as Woolf. Somewhat to my relief, I discovered that while Kidman employed an RP accent to play Woolf, she didn’t mimic Woolf’s cadences or elocution. She used her natural voice, which is much huskier and harsher than Woolf’s plummy murmur. Well, if it’s good enough for Academy Awards voters, it’s good enough for me: I also plan to employ the accent but not the tone or cadence.

I know, this is a one-night-only benefit performance and, cerebral woman that I am, I’m probably over-thinking it. No matter what, tonight I’m going to go onstage and, for eight minutes, play Jeremy Cole’s version of Virginia Woolf. And who’s afraid of Virginia Woolf? Not I.