Ashley encourages you to find your biggest fan and hug them until they force you to stop it. 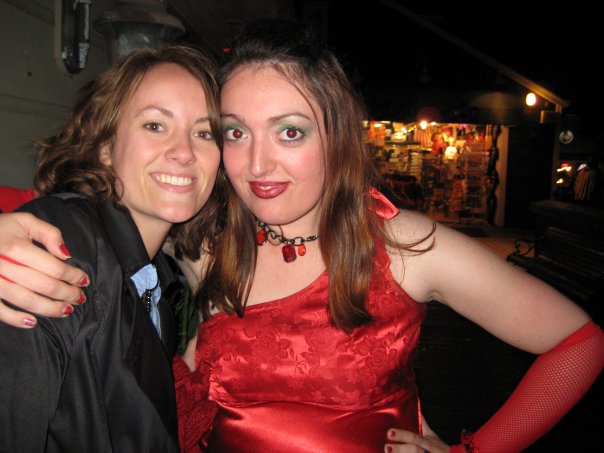 Katelyn and Ashley… while Ashley’s in a show playing The Maid Of Honor! Weird!

My sister is getting married on Saturday so my mind has been running in an endless list and I’ve been staying up late pretending to work on my Matron of Honor speech. There’s just so many things I want to say and know that I can’t possibly articulate about the whole thing so I end up writing a word and then distracting myself with House Hunters reruns. That scripted dialogue about buying a home is oddly soothing sometimes.

But I got to thinking about an old joke my sister and I have; I honestly can’t remember who first titled her as my “biggest fan” but she’s been lovingly teasing me with that title whenever it seems like a funny time. In her college dorm ten years ago, she hung up the new fancy New York City headshot I used all my savings to take and then print, and put on a star on it, declaring herself Ashley Cowan’s biggest fan. It was awesome. I felt like I had made it.

My sister Katelyn has been the best biggest fan. She’s seen me in more shows than anyone else, even ones I may have been less proud of… She’s seen me play all of the female characters in Tony n’ Tina’s Wedding (which, come on, that’s a lot of interactive performance to willingly endure). She’s honest when I need the feedback but terribly kind with it because she knows I’m sensitive. She’s the one who I ask to bounce things off of when I’m encountering a writer’s block and often she makes me go around the block by suggesting a brilliant new path. I’ve even sent her several Theater Pub blog entries before I send them off to Stuart just so I can get an extra pair of eyes on my latest words.

Katelyn’s also the one I text before I buy almost anything just so she can tell me if it’s cool or not. My knowledge of makeup and fashion trends is almost 100% based upon those text exchanges punctuated by various emoticons. But for me, I need my biggest fan to keep up my star identity.

So Katelyn, even though we joke about the term, I thank you for the pushes to keep doing the things that I love; to have the courage to audition, to actually write the ideas that seem silly or stupid in my head; to keep reaching for my place in the stars. I’ll never be able to express enough gratitude for it.

And to everyone else, I say, go find your biggest fan! Thank that person who believes in you, loves you, and makes you better than you are. Give them a hug or like, a winning scratch ticket, they’ve earned it. Sure, we should all strive to be our own fans but finding your very own biggest fan? Well, there’s nothing quite like it. Now excuse me while I pause House Hunters and attempt to write some more words for my sister, my friend, my fan.

This week Ashley chats with Sam Bertken about tonight’s reading with the San Francisco Olympians Festival.

It’s night five of the San Francisco Olympians Festival! Can you feel the magic? Well, I certainly can because tonight’s the night my short will be taking its first breath in front of an audience. This evening’s performance, THE CREW, features eight shorts by Steven Westdahl, Megan Cohen, Laylah Muran de Assereto, Jennifer Lynne Roberts, Alandra Hileman, Seanan Palmero, Alan Olejniczak, and me! Wearing an additional hat, the pieces are being directed by Steven Westdahl who has assembled a fearless group of eight actors including, Sam Bertken, Matt Gunnison, Layne Austin, Heather Kellogg, Wayne Wong, Tom Cokenias, Katharine Otis, and Kim Saunders.

To give me a little additional insight into the acting process, Sam agreed to help answer a few questions. So wahoo! Here we go:

Ashley: First, tell us who you are playing in this evening’s performance.

Sam: I am playing such a fun breadth of different characters! One half of a foul-mouthed duo on a segway tour of Atlanta, an actor who reads stage directions, one half of a Canadian air rescue team, one half of a Marina bro pair celebrating the holidays at their wives’ OBGYN clinic, and the hammiest narrator I’ve ever had the honor of portraying.

Ashley: If you took one of those online “Which Greek God Are You”? quizzes, who do you think you would get?

Sam: Ideally, it would be someone ultra-cool and talented like Hephaestus, who is my personal favorite out of the entire pantheon, but it’s more likely I’d get someone spry like Hermes or something more confusing like Hestia.

Ashley: What’s your favorite line you get to say in tonight’s show?

Sam: It’s a tough choice, but simply because it is so close to my personal interests, “Bring on the fucking doughnuts!” definitely ranks up there with the best of ’em.

Ashley: What’s the most challenging thing about being an actor in the Olympians Festival?

Sam: As someone who has written for the festival previously, I think it’s actually remarkably easy to be an actor in the Olympians Festival. Just show up to the right rehearsals, and go with the flow. Be ready to go with the flow.

Ashley: What’s the best part about being an actor in the Olympians Festival?

Sam: The auditions! And probably the performance night, but I can’t be 100% sure yet. 🙂

Ashley: If you could only use emoticons to describe tonight’s show, which ones would you use?

Ashley: Where can we see you next? Are you acting in any upcoming productions?

Sam: Well, I’m going to the TBA Awards! And then I’m going to be part of the comedy maelstrom that will be KMLZ, Killing My Lobster’s end-of-year show, which you should totally come see!

Awesome, Sam! Well, gang, you can see Sam, me, and the rest of “the crew” tonight at The Exit. We hope you’ll be there with doughnuts.

The 2015 festival will play 12 nights, November 4-21, Wednesday through Saturday, at the EXIT Theatre in San Francisco (156 Eddy Street). Tickets are $10.00 at the door, and can be purchased starting at 7:30 the night of the show, or in advance for $12 at Brown Paper Tickets. All shows begin at 8 PM. Audience members who attend more than four nights get the fifth free!