As Ashley prepares for Closing Night, she reflects on the hardest parts of the process.

Back in early February, closing Middletown seemed so far away. 2016 had only just started and I was feeling both anxious and excited to dive into my first full length show in three years. Rehearsals were only just starting, lines were still new and not memorized, and I hadn’t even met the entire cast yet. It seemed like we had a long road ahead.

I’m a believer that sometimes plays find you. They grab a hold of you before you even realize it and strive to teach you something, leave you with something, before that grasp is forced to let go. It could be the language in the text, an emotion it brings out, or simply, just a shared quiet moment between you and an audience member. And so, here we are. Months later. The long road approaches its finish line. Our last four performance of Will Eno’s Middletown at Custom Made Theatre start tonight and by Saturday evening our show will be closed.

Sure. We’ll all get some more personal time to catch up on our poor neglected friend, TV and maybe get a little more sleep to dream about TV. But there’s a lot of stuff that sucks about ending a show, too. Here’s just a few things I’ll miss

1.) Justifying a dinner consisting of those delicious individual sized Sabra hummus and pretzel cups, a Quest bar, and a venti Starbucks caffeinated beverage

Oh, hummus. I think I’ll miss you most of all. Nothing compares to you. Certainly, not a bigger hummus container of the same flavor at home. 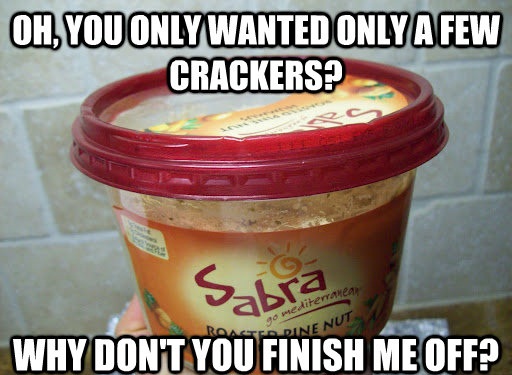 3.) Big Booty
Okay, I love cast warm ups. They’re such a great way to connect with your team before you’re out together on stage and sometimes they offer enough physical activity for me to sort of feel like I’m at the gym! Big Booty. Whenever someone suggests we play it, I’m filled with an incredible anxiety and excitement that can not be matched! If you don’t know the game, look it up. It’s a crazy rush!

4.) The play within the play
There’s a lot of beautiful stuff that happens backstage. Between the very tight quarters and our large set pieces and some creaky floor boards and a big cast, there’s a delicate dance that goes on each night that the audience never gets to see. Sometimes it’s not so delicate and suppressing some of the giggles that result from those more difficult maneuvers can be a challenge but that just makes it all more fun.

The cast (and stage managers) of Middletown snuggling in the Green Room!)

5.) The constant stream of lines running through my mind
When I hear a certain word or phrase that is either in the show or reminds me of the script, I’m immediately transported to where I am when that moment of the play is happening. I know when the show closes, this feature will start to fade away as it always does, which makes my heart ache just a bit.

6.) Those moments when you’re putting your makeup and first costume on while someone else bares a life story you’ve never heard before or shares a secret.
Like I said earlier, I think plays find you. And sometimes that’s to bring new cast mates together. When I think back on this production of Middletown, I know I’ll remember those surprising moments in the girls dressing room (lovingly called, “The Boudoir” when we’re in the middle of a show) when we sat putting on makeup and someone told a wondrous story from their past or quietly offered a truly honest, bare event from their life and how it’s shaped them. Mainly we laugh together, but we’ve also created this space that allows us to explore some other colorful feelings, as well. Those moments have made me so thankful and emotional, which I think is a big lesson from Middletown and I know I’ll forever miss it. 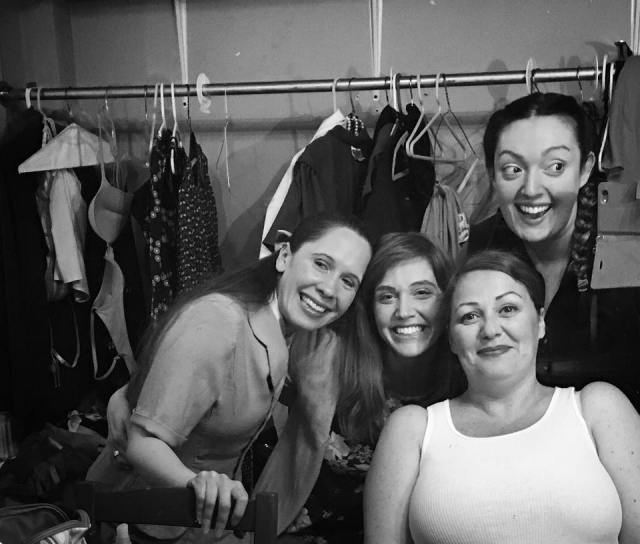 So many feelings, only so much hummus to sustain them all.

7.) Taking a moment to dedicate each show to a past me
As part of my own personal, pre show ritual, I take a moment before each performance and “dedicate” the show to a past version of myself. To the 4 year old who told her parents she wanted to be an actress, to the 12 year old who hated looking in the mirror and longed to grow up, to the senior in college scared that she’d never be cast in anything in the real world, to the young twenty something living in NYC waiting hours just to sing her 16 bars at an audition, to the woman who moved to San Francisco on a whim, to the February Ashley who worried that it’d be impossible to manage being in a play again with a baby at home, etc. The ritual helps me to focus and be grateful to be exactly where I am.

Closing a show always makes me cry. Even thinking of closing a show gets me teary eyed. Not gonna lie, I’m probably crying as you read this. Closing a show is the worst. But the journey, the whole experience, is as beautiful and wonderful as you allow it to be. So, to the cast and crew, those that shared this story with us, and to the folks we hope to see in these final four performances – thank you. While closing is the worst, I think you’re all the best.

You can see Ashley either crying or not crying at Custom Made Theatre’s Middletown playing tonight at 7:30 and Thursday, Friday, and Saturday at 8pm!