Rachel Bublitz is one of those amazing people that you exemplifies what it means to be a supportive theater artist who is furthering her own artistic journey for theater and writing. I first met Rachel when she came to a performance of my first full length production by All Terrain Theater, It’s All in the Mix. Right away from her positive energy and enthusiastic attitude, you can tell that she is a playwright who will go far. She has a natural tenacity that some struggle to master, others just exude.

I was very excited to interview her about Loud and Unladylike, the new festival presented in partnership with DIVAfest, which highlights unknown, yet influential women in history by exploring their stories through a new works series. The festival started yesterday, June 25th, with Tracy Held Potter’s A is for Adeline (also showing on July 9th), continues with Claire Ann Rice’s The Effects of Ultravioliet Light on June 26th and July 11th, and Rachel’s own new work, Code Name: Brass Rose, presented on June 27th and July 10th. For more information, you can also check out the website at http://loudandunladylike.com/.

Babs: Tell me about Loud and Unladylike. How did it come about?

Rachel: One of my classes at State last Spring – I’m currently going for the MFA and MA combo from SFSU – had a final involving writing a script inspired from an outside source, and a classmate of mine did hers on a historical woman that I had never heard of. And I got a little mad, why hadn’t I heard of this kick-ass woman? That night I met Tracy and Claire to see a play, and I told them all about it and said there should be more plays about historical women, and they agreed, and so we did it. Something I love about having Claire and Tracy as close friends and collaborators is that we all agree that seeing a problem is only part of it, you have to then do something. This is our response to the lack of women’s plays being produced, and the lack of complex female characters in so many plays and films.

Claire then brought the idea to DIVAfest’s Artistic Director, Christina Augello, and she thought it would be a great addition DIVAfest’s season, and that was the start of Loud & Unladylike.

Babs: How did you choose your figure – Nancy Wake? When did you first learn about her?

Rachel: So we decided on the festival and that we’d be the guinea pigs and write for the first year. After that we had a meeting with lists and summaries of all the interesting lesser-known historical women we could find. Most of the women I had researched had been soldiers or spies; I’m drawn to the juxtaposition of war and what society tells us femininity should mean. Nancy was on a few different blogs that I came across, posts with titles like: “25 Badass Women You Don’t Know About.” That sent me off to Wikipedia, and before I knew it I was ordering her autobiography from Australia.

I spent most of that meeting trying to convince Tracy and Claire that one of them should write about Nancy Wake, and finally, I think it was Claire, said to me, “Ya know, if you like her so much, maybe you should write about her.” And this blew my mind, how could anyone not want to write about this powerhouse? After they both assured me it was okay, I never looked back. We were meant to be, Nancy and me.

Babs: What has it been like collaborating with Claire and Tracy on building the festival?

Rachel: Collaborating has been a challenge, it’s not that it’s hard for the three of us to be on the same page, we are just all very busy ladies. Tracy just finished up her MFA from CMU and has her two boys, Claire directed Allison Page’s fantastic show HILARITY earlier this year and is working on a commission from Terror-Rama, and I have my rug-rats and school as well, and so finding time to get together has been hard to say the least. Somehow it’s worked so far. I think we owe a lot to the other ladies in Loud & Unladylike who support us so well; the very talented Tonya Narvaez and Roxana Sorooshian, our production manager and literary manager respectively.

This year has also found us to be on a very slow learning curve, well me at least. Running a festival is tricky. So many complications pop up every day! And there are also so many cool things you’d like to do but aren’t worth the trouble, especially in the first year when keeping things as simple as possible is key. Even the simple gets hard, trust me. But we are kicking around some exciting ideas for the 2017 festival, and we’re in the midst of selecting the plays for 2016, so a lot of exciting things are on the horizon.

Babs: I’m also curious to learn about the development process – how have you supported each other in the research and writing or has it been mostly solo? Any anecdotes you’d like to share?

Rachel: We’ve shared pages at meetings, and talked about the themes and questions we’d like to bring up in each of our plays. Something that surprised me, that I think we’ve all had to deal with, is getting over the reverence for the person the play is inspired by, so that you can actually get something written. Knowing that this was a real person and that you’ll be informing some amount of the population about them is a heavy task, and having Claire and Tracy wrestling with this same challenge all year has been a comfort.

Also, one of my most favorite parts of the festival, is that we each will have two readings with about two weeks in between to rewrite. We’ll be hosting talkbacks after each play, and Claire and I will be running those in week one. I’m excited to play that role and engage with my fellow writers and the audience in order to develop the plays further. The second week, which might have three totally different plays based on what happens in week one, will have talkbacks lead by our literary manager, Roxana.

Babs: What do you love about the Bay Area theater scene and what would you change?

Rachel: One of my favorite parts of the Bay Area theater scene is that I’m constantly discovering more of it. I’ll be out at a show, chatting with someone brand-new, and they’ll mention so-and-so theater that they work for, and more often than you’d think, it’s a theater company I’d never heard of. I’ll think, oh they must be new, but no! Usually they’ve been around 10 or 15 years. It’s insanity. You can’t throw a rock without hitting a theater company here and that’s pretty special. BUT, in a way that’s something that I’d like to change too. Not that I’d like to see less companies, I just wish there was more collaboration among them. I love seeing companies joining forces and I think everyone could stand a little more of that. If a project is too big for one company to take on, find another to duel produce it with! Let’s do big things and stretch ourselves, and help one another.

Babs: Any advice you have for aspiring playwrights and producers of new work?

Rachel: I think the most important thing you can do, other than of course the writing or the producing, is to go see shows. I have kids which makes it hard, but I try to make it out to as many plays as possible. Not only can you learn just from seeing other work, and all other work, good, bad, mediocre, all of it has lessons for those who are looking, but you go and see the work and then you talk to people after. Say hi to the director, the actors, the playwright. Tell them what you enjoyed (only of course, if you actually did), ask them about their inspiration, ask how you could get involved. Theaters take on a risk when producing local work, but if we all went out and saw one another’s work, that risk would be much less, so I especially try to make it out when a new work of a local playwright is being produced. We can’t demand it if we don’t ourselves support it.

Also, and this is what I think is the second most important thing, share your work. Submit plays to theaters, yes, but also have your friends over to read your drafts. Ask actors and directors you know to read what you’re working on, ask advice on where your work would fit best, and then reach out to them. You’re going to be ignored a lot, but I’ve found that if you keep it up, and you keep everything positive, they don’t ignore you forever. Also, true story, I’m still being ignored by plenty of folks, that’s just part of the business. Try not to take it personally, though I know that can be hard.

Babs: Plugs for upcoming work and shout-out for other plays to check out around the area?

Rachel: Yes! My full-length play Of Serpents & Sea Spray is getting a week-long workshop with a staged reading this July (the reading is on July 24th) and will be produced in Custom Made’s 2015/16 season this coming January, with Ariel Craft as the director.

As for other shows, I don’t think anyone here in the Bay Area is allowed to miss Desk Set presented by No Nude Men, it’s a power-house cast, and is being directed by Stuart Bousel, who might just be the most generous member of the Bay Area theater community and an all around excellent theater maker. It’s running July 9-25, and will probably fill up quick, so I’d jump on those tickets ASAP, if you know what’s good for you. And, the show I’m most excited for this summer, other than Loud & Unladylike of course, has to be SF Theater Pub’s Pint Sized Plays this August! Megan Cohen’s “BEEEEEAAR!”, performed by Allison Page back in 2012, is still at the top of my all-time-favorite theater experiences, and I have a hope we’ll see more of that beer loving bear this time around. 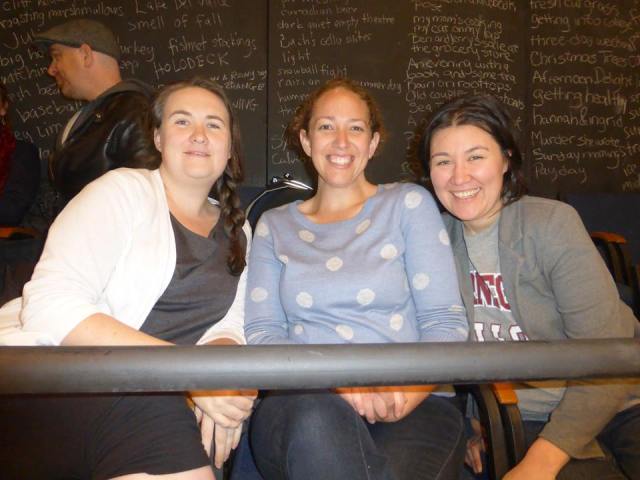 From left to right the ladies of Loud and Unladylike: Claire Rice, Rachel Bublitz, and Tracy Held Potter at a Custom Made production. Photo: Sam Bertken.

Barbara Jwanouskos is a Bay Area based playwright who can be found on twitter as well @bjwany. Tweet at her to point her to theater happenings around town!