Charles Lewis III, on why vice can be nice. 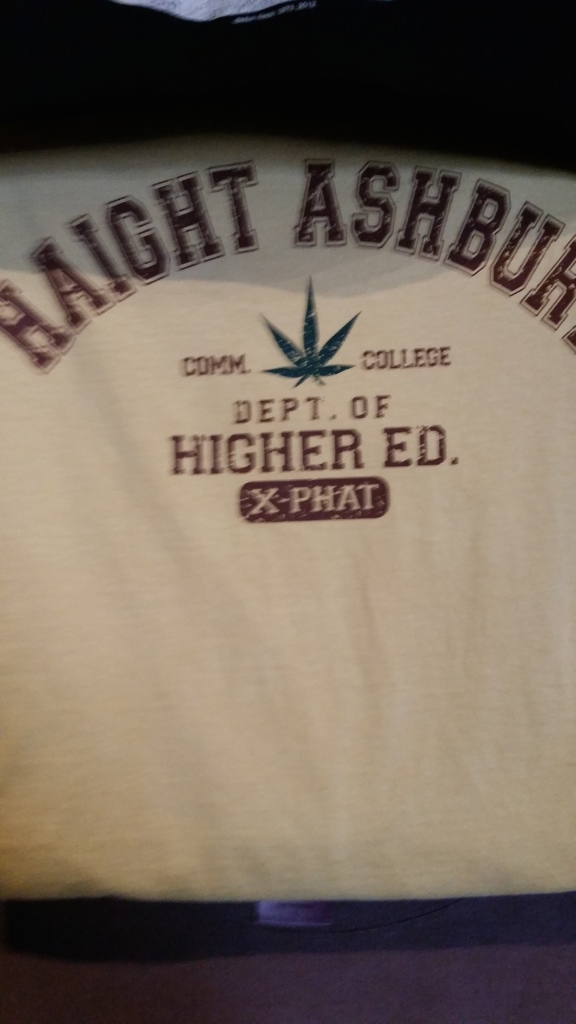 Yes, I own this shirt.

“The cannabis experience has greatly improved my appreciation for art, a subject which I had never much appreciated before. The understanding of the intent of the artist which I can achieve when high sometimes carries over to when I’m down. This is one of many human frontiers which cannabis has helped me traverse. There also have been some art-related insights — I don’t know whether they are true or false, but they were fun to formulate.”
– Carl Sagan, Mr. X (1969)

I never smoked weed until I did theatre. For that matter, I never ate sushi until I did theatre. Yes, I was one of those boring teens who never drank, smoked, or went to parties. (Well, I did try smoking cigarettes several times, but it never caught on.) Part of that was due to just being an awkward teen who never hung with The Cool Kids, but another part was by choice. I studied religion as a kid and took the concept of “pure body, pure mind, pure soul” to heart. And to be honest, I was pretty damn content with myself.

It wasn’t until I was 27 – an age at which I’d put the “pure body, et. al” bullshit behind me – that I’d decided to see what weed was all about. I’d just finished a show with a local theatre company and we were having our closing night celebration. Turns out these folks had a closing night tradition of rechristening the dressing room as “The Green Room” for reasons that should be obvious. After awkwardly making my way in and patiently waiting for the bowl to come around to me, I took my first toke.

Nothing happened, really. It’d be a later incident at 4/20 in Golden Gate Park before I finally actually got high. Still, it worked in as much as being a socially-inclusive gateway to fellow theatre-folk. And even when I was a clean-living teen/upcoming artist, I was always fascinated by the idea of an intoxicating substance enhancing the creative process.

“Write drunk, edit sober” is a phrase we’ve all heard thrown around willy-nilly. (It’s often misattributed to Hemingway when it’s more likely from Peter de Vries.) Both F. Scott Fitzgerald and Zelda were notorious for it. Mary Shelley got smashed on absinthe with her husband and Lord Byron, then wrote her masterpiece Frankenstein. Hell, scientists believe even Shakespeare may have smoked weed between writing sonnets. It all contributes to the idea that when inspiration is out of reach, it can be found within your poison of choice.

I personally wouldn’t know. I rarely drink outside of social gatherings (I’ve been drunk exactly five times my entire life) and do so as a method of decompression rather than inspiration. The only times I smoke weed are when I’m around someone who prefers not to smoke alone, and it’s never made want to start writing. I’ve never had the chance to do mushrooms, though I’m not opposed to the idea. And despite knowing many people who love it, I will never do cocaine. (Before we found out how terrible he was, Bill Cosby had stand-up routine that sums up my thoughts perfectly: “I said to a guy, ‘Tell me, what is it about cocaine that makes it so wonderful,’ and he said, ‘Because it intensifies your personality.’ I said, ‘Yes, but what if you’re an asshole?’”) I’m not on any moral high horse – I like weed, beer, and the friends who share in them with me – but they’ve never worked for me in terms of electrifying my creativity.

But that’s just me. In addition to the aforementioned authors above, I can cite countless works of art created under the influence which I hold dear: the weed-inspired illustrations Salvador Dalí or Mœbius; the coke-fueled ‘70s films of Martin Scorsese; hell, damn-near anything from the Harlem Renaissance. Without those substances, those great works might never have been possible and I might not have been inspired by them to become an artist.

The real problem is when an artist sees a mind-altering substance as their ONLY form of inspiration; when the supply gets low or empty, working with someone having withdrawal can be annoying, if not dangerous. I don’t even drink coffee, so I can’t really imagine what someone’s head must feel like when they’ve suddenly decided to teetotal.

The reason I bring all this up is because this month’s ‘Pub show, of which I’m a part, is an hilariously over-the-top satire about “the dangers of the demon weed”. Each character is based on a classic horror film trope, but with enough humanity to make them relatable. Incidentally, my character is a collegiate weed dealer, someone who uses the substance as the means to an end in order to do the art he truly loves. Yeah.

Before anyone asks: No, we don’t perform the show high. I’m sure that’d be hilarious (I’ve done Beer Theatre before and it was a fuckin’ blast), but I assure you that Colin’s script is plenty funny without the actors being baked. Plus, there’s probably some kinda law or somethin’ ‘bout smokin’ weed indoors with the public, right? I dunno…

But as I sit here with my script by my side and my soon-to-be-used typewriter in the corner, I tried to think of what it is that fuels me to write, act, direct, and explore other avenues of creativity. I’m still not really sure, but I hope I don’t run out of it anytime soon.