This week I had the pleasure of interviewing Gino DiIorio, the writer of SAM AND DEDE (OR MY DINNER WITH ANDRE THE GIANT), opening at Custom Made Theatre on February 11th.

On his website, Gino describes the play as such —

True story: 12-year old Andre the Giant, already over 6 feet tall and 240 pounds, didn’t fit on the school bus. Andre’s neighbor, as a kind gesture of returning a favor, offered to drive him to school in his truck. The neighbor was Samuel Beckett. Out of that bit of trivia comes “Sam and Dede, or My Dinner with Andre the Giant,” imagining three scenes between a giant – a man who cannot hide, and a writer obsessed with silence.

So of course, I was intrigued. I mean lately I’ve been obsessed with silence and subtlety and how it’s theatricalized. Gino and I talked about that and also his influences and creative process.

Enjoy the interview below!

Barbara: First off — your premise for SAM AND DEDE sounds amazing — a man obsessed with silence and a giant who cannot hide — how did you come to the idea for this play? What intrigued you?

Gino: My son was very interested in professional wrestling. And I mentioned that when I was his age, I was as well and he asked who were my favorites. And I mentioned Bruno Sammartino and the British Bulldogs and of course, Andre the Giant. He had never heard of him so we Wikied him and that’s where I found out he knew Sam Beckett. And I thought if anyone can write this play, it’s me. Cause I love Beckett as well.

It was great fun to write because once I got them in the room together, I couldn’t shut up them up. They just had great takes on the world, such different experiences and in a way, (not to be too egotistical) but they’re extensions of me. And I guess that’s true of all writers, every character we write is just an extension of ourselves. But Andre is the part of me that thinks I can do everything and that everything is simple and nothing matters and so what if it did? And just have a good time and live life to the fullest. And theatre is about being big and over the top and crazy. Beckett is the part of me that doubts everything, my ability to do anything, the reason to get out of bed in the morning, the weight of the world, the heaviness of existence, the inability to construct a sentence. In this regard I suppose they’re probably like everyone else on the planet!

Barbara: Tell me about your creative process. Is each play unique or do you generally approach new work in a similar way?

Gino: I try to put the characters in a room and let them talk. And if it’s going well, they do things that surprise me.

Barbara: Anything that you’ve come across in your trajectory as a theater artist that made you question or overhaul what you do? What happened? What changed?

Gino: Good question. I sometimes think I’m a bit of an anachronism. I tend to write stuff that’s very linear, straightforward plot lines, etc. I think it’s harder to write a play with a plot. Most writers avoid plot because it’s so damned difficult. But then again, it’s good to try to write something that perhaps doesn’t follow a traditional line and I guess Sam and Dede is just that. It’s a play where I didn’t feel to urge to have anything happen. Kind of like a Beckett play I suppose. Nothing happens. and in turn, things begin to happen in that absence. If that makes sense.

Barbara: How did you get into theater and writing in particular?

Gino: I began as an actor. I did a lot of Shakespeare, regional stuff, commercials, etc. I did it in high school mostly cause I was good at it. And I liked losing myself in the role.

Barbara: Tell me about the current state of theater. Where are we going?

Gino: Oy. In some ways,there’s a lot of good going on. I see a lot of focus on new play development. The problem is it’s too expensive to produce new plays on Broadway and Off Broadway. So it’s hard for plays to get their New York pedigree,if you will. If i could snap my fingers and change one thing about theatre, it’d be that. I’d make it easier to produce new works on the New York stage. it’s just too cost prohibitive. Negotiating a new deal with the technical unions would be a good first start.

But here’s the good news, people still love writing for the theatre. And going to the theatre. It’s wonderfully atavistic and despite the cost and the assault from new technologies, it still remains unique and vibrant.

Barbara: Anything about it that scares you or makes you dream big?

Gino: Wow. I don’t know. I think I get scared that I’ll die before I finish all these play ideas I have in my head! I don’t dream that big. I dream of small honest moments on stage. If I get a lot of those, I’m happy.

Barbara: What’s next for you?

Gino: I’m researching a historical piece on slavery in the 18th century. Yeah, I know. Good luck getting that produced! But it’s what I’m interested in.

Barbara: Words of wisdom for people who want to do what you do?

Gino: If you can do anything else, do it. If you must write or be in the theatre, don’t think you can make a living at it. Remember what makes it great, what you love about it, and judge your success by how much you live in that.

Barbara: Any bad advice that might actually be good?

Gino: Wow, good question. I’ve been lucky, I haven’t gotten that much bad advice. But I will share something my good friend Gary Garrison told me, it’s good to listen to lots of people but reserve the right to ignore all of it. Or some of it. You can pick and choose your advice. Ultimately the piece has to mean something to you. It’s why you wrote the thing in the first place.

Barbara: Shout outs and plugs for your things (theater and otherwise), friends’ things or just anything you thought was rad?

Gino: New Jersey Rep is the greatest. Suzanne and Gabe Barabbas, great people. Clark University rocks. Which is where I met Leah Abrams and Brian Katz of Custom Made! 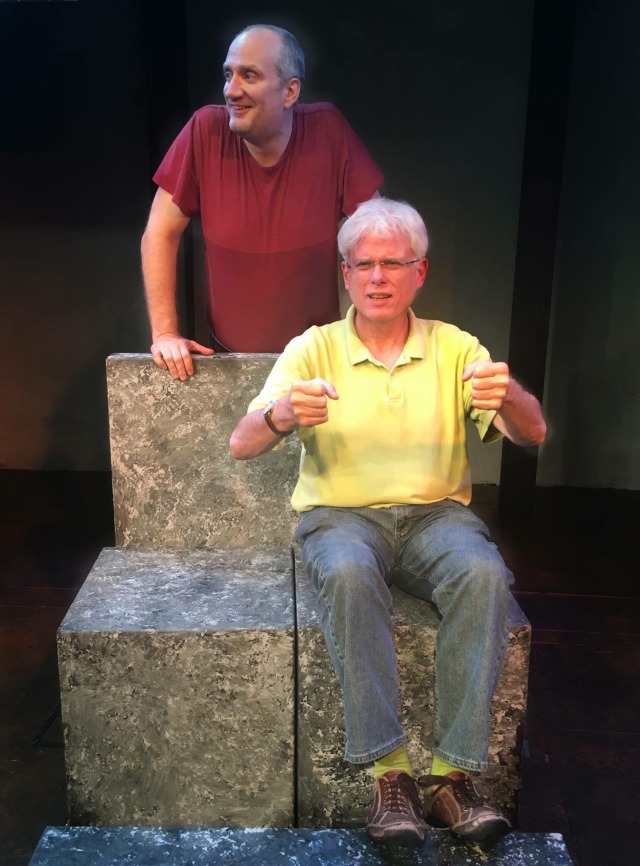 Dave Sikula and Brendan Averett in rehearsal at Custom Made for SAM AND DEDE.

You can catch SAM AND DEDE at Custom Made Theatre from February 11 through March 5.