Dave Sikula, sliding in just before the weekend kicks off.

I don’t know what it is about this line of inquiry, but this series of posts garnered more clicks – and even Facebook shares – than anything else I’ve written. As far as I can tell, though, this will be the last entry for now on the topic. (We’ll see what happens in about 800 words when I realize I still have more to say and don’t want to strain your patience.)

Let me deal with the Arthur Miller reference I made in the last colyum. I need to preface that, though, with some background on Sydney’s Belvoir Street Theatre.

If I won’t link to it, I should at least show it.

Looking at their website, it seems like they’re a company dedicated to screwing around with other people’s creations while relentlessly patting themselves on the back for doing so. Consider this blurb for “Miss Julie:” “August Strindberg’s masterpiece has been hovering in the wings at Belvoir for a while now, waiting for the right people: Leticia Cáceres and Brendan Cowell both know how to combine tender and brutal to devastating effect. Simon Stone joins them with a rewrite of the play in the fashion of his The Wild Duck.” Note the “his” there, which refers to Mr. Stone, and not either the late Mr. Strindberg or the late Mr. Ibsen. Pretty much every description of the plays they produce refers to an “adaptation” of this or “a contemporary version” of that. Not content to adhere to the intentions of the playwright, they’ve decided that their only responsibility is to themselves. 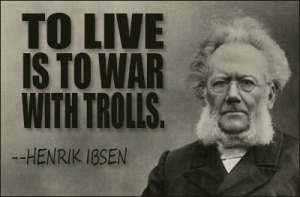 Mind you, I’m not saying this would be Ibsen’s opinion of Stone, but …

In 2012, Mr. Stone decided to produce Miller’s “Death of a Salesman” – or, at least, some of it. According to Terry Teachout’s report:

Not only did he cut the play’s epilogue, but he altered the manner in which Willy Loman, Arthur Miller’s protagonist, meets his death. In the original play, Willy dies in a car crash that may or may not have been intentional; in Mr. Stone’s staging, he commits suicide by gassing himself. On top of that, Belvoir neglected to inform ICM Partners, the agency that represents Mr. Miller’s estate and licenses his plays for production around the world, that Mr. Stone was altering the script.

Since rewriting dead playwrights seems to be Stone’s stock in trade, I can see why he didn’t feel the author’s representatives were worth notifying. I’m actually surprised he was did something as boring, traditional, and mundane as casting a male actor as Willy. They’re currently doing “Hedda Gabler” (a play that’s dismal enough) with a male actor playing Hedda. Because A) it’s supposed to make a statement about gender roles and B) apparently there aren’t any women in Sydney who are capable of playing the part. 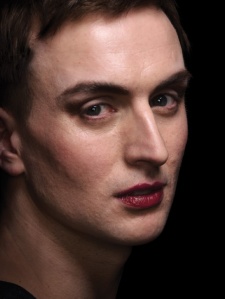 Mr. Stone’s defense of his bastardized presentation of Miller’s play was “”Until recently we accepted the Broadway or West End way of treating their classics, now we are bringing to them an Australian sensibility and technique. The world is responding.” Since the “Australian sensibility and technique” seems to involve violating copyright and ignoring a writer’s intentions, it’s no wonder the world is “responding” – mainly by refusing him the rights to do anything. A look at their current season shows rewrites of “Oedipus” (two of them!), “The Inspector General” (“inspired by Nikolai Gogol” – who only wrote the goddamn thing), “Nora,” (“after ‘A Doll’s House’ by Henrik Ibsen”), “A Christmas Carol” (“after Charles Dickens”) and “Cinderella.” They’re also doing “The Glass Menagerie,” but I’d imagine the rights-holders are keeping a close watch on them.

This kind of conduct goes to the heart of how the Facebook discussion about the Mamet case went. The opinions ranged from the conviction that the writer owns his or her words and has every right to determine how they’re presented to an audience, to a belief that since plays are more intangible things than physical, they should the property of any director or actor who wanted to do anything they wanted with them. One poster tried to make his case by saying that if I bought a shirt, he was free to do whatever he wanted with it: cut off the sleeves, dye it, or whatever. Never mind that he’s not buying that particular shirt; he’s borrowing it from someone who probably won’t appreciate the alterations.

“Here’s your shirt back — or at least all the pieces.”

Eric L. writes: “How do you think this incident compares to the Beckett’s objection and legal action against Akalaitis’s production of Endgame?”

Thanks for asking, Eric. As expected, though, I’ve reached my weekly limit and will return to this topic next time