Barbara Jwanouskos interviews the creative team behind Every 28 Hours.

Every 28 Hours is a piece that was created by linking one-minute plays based on the staggering statistic that every 28 hours, a person of color is murdered by a police officer, vigilante, or security guard. This is a piece that hits deeply into the legacy of white supremacy that our culture has been built upon and asks us if we are willing to look at ourselves to build a way of living and interacting where black lives matter.

I had the opportunity to speak with two of the actors in the Every 28 Hours production here in the Bay Area. Their names are William H. Bryant Jr. (BJ) and Skyler Cooper, and I feel fortunate that we were able to connect to share their experiences working on such an intensely powerful theatrical production.

Every 28 Hours is produced by Faultline Theater and playing at PianoFight until Nov.12.

Barbara: Tell me about Every 28 Hours and how you came to be involved. What are you bringing to the table? Where do you see yourself in the piece?

Skyler: Every 28 Hours is a collection of stories influenced by experiences of black and brown men and women at the hands of law enforcement in this country. I wanted to be a part of this because it’s necessary and it’s vitally important to raise awareness and I am all about the creative activism that weaves throughout these stories. In my heart I knew I was being called forth from a deep spiritual place to do something with my artistic voice. I have been using my art to bring awareness to LGBTQ issues in the past, present, and future. But I am not just from that community, I am also black and I am an American and this affects me and my loved ones. I am fortunate that I am able to say “Yes”. I know so many actors would if they could. It felt like a “call to arms” when I was first told about the project. Also I relate to these stories not just because I’m black but also because I’m transgender, as well as two-spirited. I have walked in both black men and women’s shoes in this country and I’m here to tell you it ain’t easy. Currently the path I walk in the world is predominately as male. I’m either seen as a cisgender black male or a black trans male, every now and then (although I identify as a transgender actor), I am still remembered for the characters I’ve done as a cisgender masculine-of-center female. So I could be seen as black butch female. They have it just as bad as males if not worse in some cases.

BJ: First and foremost, thank you, Barbara, for the opportunity to share a bit about myself and the type of work I love doing the most. Every 28 Hours is a project comprised of 72 one-minute plays that are inspired by the Black Lives Matter movement and was developed after the news of Michael Brown’s death. The title comes from the often challenged statistic that a person of color is murdered by a police officer, vigilante, or security guard every 28 hours.

I first heard of the plays, actually, from one of my cast mates and friend, Deane, who had already started working on the plays before I came aboard. I ended up joining the rest of the amazing cast late because they needed another actor due to one having to drop out because of a conflict. I couldn’t be more grateful for the open arms that welcomed me, from the cast, to the directors, to the production team. Not only did I see it as an amazing opportunity to speak up for something with life-and-death importance to me, but I saw it as a responsibility to stress how important it is for us to, at the very least, open dialogue and have a conversation about the subject matter of the plays.

I see myself in this piece as part of a group with a story to tell. We all complement each other in ways I feel make us most effective in telling these stories. The bond that we created has been so crucial in working to do the writers of these incredibly moving pieces justice.

Barbara: What has the creative process been like? Has there been anything that surprised you along the way?

Skyler: Doing one-minute plays with five different (amazing) directors is a treat. Yet the creative process is different on so many levels from a traditional three-act structured play. It’s kind of like boot camp for character development. Much of what these plays give are a three-act story structure in one minute. I can find the beginning, middle, and end in most of the pieces on stage. Much of the creative process on all these plays is put into the backstory — what is not seen or said in the play. It has allowed us to bring full characters to the table. It’s necessary when you only get one minute! I’m surprised at how full these plays can be, say so little, and give so much.

BJ: The creative process of working on the pieces has been quite the learning experience. We are very lucky to be working with five of the most ingenious, brilliant, and hardworking directors and production team. This itself has made the creative process for this project so much more effective and real. The directors have put all of their beings into this whole process, instilling life into the pieces and allowing us the freedom to do the same with the characters while keeping in mind that this project isn’t for us; it’s for the victims, their families, and everyone who is blind to the fact that there is a major problem in our society/country.

I was actually surprised by how physically, emotionally, and spiritually exhausting, the entire process would be. But, the cause itself, the work, and each other are motivation enough that help along the way and keep us aiming to raise the bar after each and every performance. 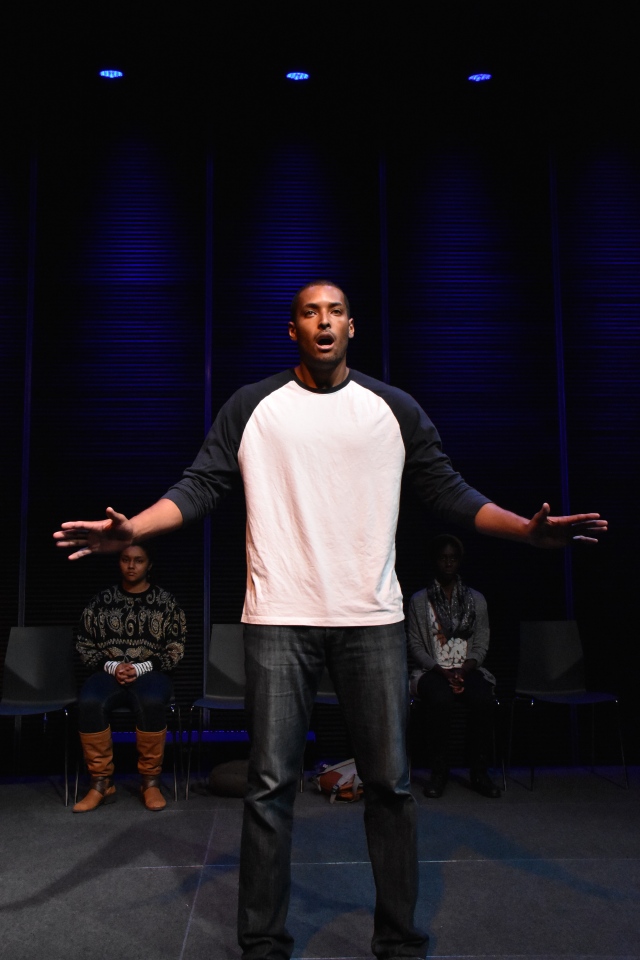 Barbara: Is there anything you do for yourself when investing so much of yourself into a powerful piece like this one? How do you keep going when it goes so deep?

Skyler: What I do to care for myself through this process is exercise my spiritual practice. It keeps me grounded and I include everyone else in my prayers — cast, crew, audiences and the souls that we lost. I rededicate each performance and I try to ground myself in their power, the power of the piece, and the power of the people. When I’m able to do this my cause is unshakable, because the roots are deep with love rather than fear or hate. I try to give love to myself and to the purpose of the piece. It’s all love.

BJ: When investing everything I can into a piece like this I learned that it helps to clear your head by bonding with your cast mates, friends, family, and loved ones. Also, I have guilty pleasures that I go to, like watching cartoons every now and then or watching superhero movies. I’ve learned during this project that we have to continue to go as deep as possible because this play isn’t for us and we have a message to send. So it helps knowing that we’d be selfish if we were to hold ourselves back in any way. So that, and knowing that my castmates, who have become like brothers and sisters to me, and my family and friends always have my back, definitely helps keep me going. I’m extremely lucky and blessed to have the support system I have especially in doing a project like this.

Barbara: Do you have a favorite moment or line of the piece? What is it and why is it your favorite?

Skyler: There are many… but I think my favorite line is the whole point of Every 28 Hours. It’s where two black men, one from the past and the other from the present, say, “I don’t want to fight. I want to be free.”

BJ: It’s tough to point out a specific piece or line and say it is my favorite because there are so many magical, tragic, heartfelt moments that capture the essence of the messages we are trying to send. There is a piece called “The Gray Area,” written by Chisa Hutchinson and performed spectacularly by Adriane Deane and Stephanie Wilborn in our run. It is a play in which a black protester explains to a white protester who is protesting “police brutality against all people,” that her form of protest is a form of racism because of her choice to ignore the fact that police brutality disproportionately targets black people. This is one of my favorite pieces because there are so many people in society who severely undermine the Black Lives Matters movement with the statement, “all lives matter,” when all lives aren’t being taken at the same rate that black lives are because of police brutality.

Barbara: What words of wisdom would you give to others that want to do what you do?

Skyler: Do it. There is only one you. Also, know that training, focus, dedication, courage, humility, and passion, are helpful to any actor who wishes to find their artistic voice. When I was able to find my artistic voice, I was able to chose the plays and characters that helped me to develop my craft beyond my training. Even still I think taking workshop intensives are great. Every instrument needs to be tuned every now and then. The theater is where I started and I highly encourage anyone who wants to be an actor to look to theater at some point preferably at the beginning. It truly is where the actor gets to work their craft the most, your entire body becomes your instrument.

BJ: I would say if they are willing to put everything they have into their craft, especially in doing plays like these, then be sure to take care of yourself mentally, emotionally, physically, and spiritually. Really diving into a piece as heavy as this one can take a toll on your body in many different ways.

Barbara: What are you hoping someone watching the piece will take away?

Skyler: To have an unshakeable desire to enact a change in this country. Mindfulness to a degree that allows them to shift unconscious biases held against black and brown people.

BJ: What I am really hoping that people take away from this piece is the urge to act and not just stand by any longer as this continues to go on throughout the country. There are many ways to become active and fight against racism, systematic racism, and police brutality against people of color. I also hope more and more people try to get others to open their minds and understand the struggle instead of staying stagnant, in denial that there is a problem in society.