Allison Page- voice of the moment.

If you’re like me during tech week, you don’t eat right, you don’t wash your dishes, you don’t do your laundry, and you may or may not have time for real actual sleep. Because I am AD at a company which produces a new show every month, I’m in tech every 3 weeks (occasionally because of the way particular months are laid out, it’s actually more like 2 weeks) and I’m getting pretty good at it…uh, most of the time. I’ve had to figure it out. Because if you do the math, I’m in tech three solid months of the year.

Here’s how I prepare for and survive tech week when it’s always just around the corner: 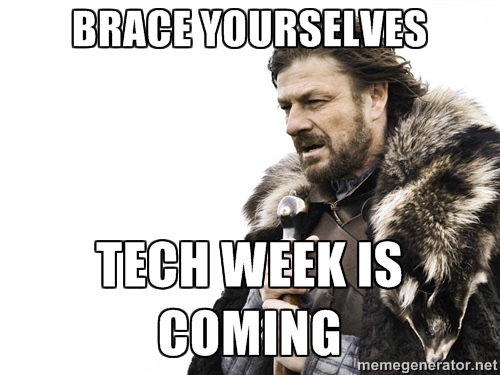 WEEK 1
Recover From The Last One:
I try to give myself a break. Though “break” doesn’t mean the same thing to everybody. Break, for me, means having a slow morning. I go out for pancakes I pay someone else to make down the street. Luxuriate on the couch. Read a book. Refuse to do my hair. And then I inevitably start writing something because I find that to be strangely both relaxing and work. No matter what, I try to pay attention to something completely unrelated to the onslaught of productions that have me booked up until at least April of next year.

Front Load The Home Stuff:
Dishes, laundry, cleaning, organize my apartment, go through my closet and maybe get rid of some stuff…or more accurately set that stuff in a donation pile and then forget about it for six months but hey – it’s in the pile! That’s…something. Anyway, the point is, I take care of that stuff as early on as possible because honestly everything is probably a wreck in my apartment and if I don’t do it right away I won’t get it done. Clearly I’ll just have to do it again before tech week starts, but hopefully it’ll be easier if I do the big cleaning in the first week. THAT’S WHAT I KEEP TELLING MYSELF HAHA OH MAN WHO AM I KIDDING.

WEEK 2
Hang Out With Friends:
It can be really hard to see my non-theater friends just in general, but definitely when I’m in tech this much. The second week is a good time for non-show shenanigans. Even then it can be tough, because a part of me just wants to take a thousand naps, but when I do force myself out of my apartment it feeds my brain parts and I feel better. Though I also can’t overstate how awesome it is to be affixed to my couch. Basically no matter what I want to take a nap. But yay! Friends! Oh, and call your family. Because they will inevitably try to talk to you during tech when you have no patience and they want to pass the phone around to 9 different people at your aunt’s birthday party.

Eat a Salad:
Listen, I eat like a trash can all the time anyway, but it’s worse during tech week. So when it’s not tech week, I eat real actual food. I buy actual vegetables. I make an actual salad. Maybe I’ll take a vitamin…probably not, but maybe. I also enjoy cooking, so I get some relaxing kitchen time in while I can before the anvil of tech week is tied to my ankle.

WEEK 3
Plan, Plan, Plan:
Guess what, tech is next week! GET READY. No, really, this is when I get ready. I like surprises but only when the surprises are edible. I don’t like production surprises. So, checking in with the team multiple times to make sure every possible thing is taken care of before everyone piles into the theater, sweaty and tired, is a big ‘YES, PLEASE’ for me. Stuff’s still going to come up, but I would love it if that stuff isn’t a giant obstacle that will take me multiple days to sort out.

Crockpot, How I Love Thee:
I make things in my crockpot and throw it in the fridge a day before tech week starts, so when I get home at the end of the night I can stuff my face with reheated chili. It’s also great to not have to think about what lunch is going to be when I’m dragging my carcass out of bed. Cold chicken fajita filling? GREAT. GIMME. I have a production meeting and I don’t want to be so hungry that I snap at someone for forgetting that they need a giant prop they forgot to mention the last three weeks.

Yeah, a lot of these are about food. Food is important. And Clif Bars can only get you so far.

Okay, now I’m hungry and I’m going to eat a bagel from this cafe. Nobody’s perfect.

Allison Page is a writer/actor/director/Artistic Director at Killing My Lobster.