I heard about Britney Frazier before I ever met her, when taking acting classes at Laney College under Michael Anthony Torres’ direction. I knew that she was an amazing actor — and then I got to see her in a play. Wow, blown away. As an actor, Britney brings so much depth of feeling to her work and the same can be said of her writing.

Her one minute plays packed a lot of punch both in 2015 and 2014 at the Playwright’s Foundation benefit and were smong my favorites of the evening. When I learned that she was having a reading and I had to talk with her. The subject matter couldn’t be more timely.

From the media blurb:
There is a myth that persists that “black folks don’t get depressed, we get the blues,” and as a result, too often, the opportunities to talk about mental illness and suicide in African diasporic communities are missed as our loved ones continue to take their own lives. The Centers for Disease Control and Prevention reports that suicide claims one African American every 4.5 hours. The top three factors that contribute to suicide in communities of African descent which go unaddressed are: untreated mental illness, homophobic bullying and religion.

Dysphoria: An Apache Dance is the confabulation of two drunks in a “dive bar” under the waves contemplating gender roles and the trials, tribulations, bonds and breaks of a mother, daughter narrative, and an inquiry into whether genetically inherited predispositions lead to depression, PTSD and suicide, or if ancestral memories passed from the “hanging rope” to the umbilical cord are the culprit.

What follows is an interview with Britney Frazier about her creative process and Dysphoria: An Apache Dance.

Barbara: Tell me about your background. What got you interested in writing and theater?

Britney: I started my career in the arts as an actor and acting is extremely unpredictable. In order to preserve my sanity in the uncertainty, I decided to take a month long writing workshop with Marcus Gardley at the Playwright’s Foundation. Gardley did this cool exercise where we, as a group, brainstormed play concepts and types of main characters and then put our ideas in a hat to then randomly pick. The concept I picked was, love is blind and my character type was female protagonist, and I hit the ground running. In a month’s time, with the guidance of Mr. Gardley, I came up with my first play, Obeah, about a two-headed seer falling in love with Shango, Orisha of male virility and fire. Shortly after that workshop, I got my first directing gig, Assistant Directing for Ellen Sebastian Chang.

Barbara: How does acting influence how you write a play?

Britney: As an actor and playwright, I really love plays where the characters are emotionally bold and stories themselves are taboo or obscure. I feel like because I’m an actor who also directs, I write with the whole story in mind, considering the design and transitions along with the plot and characters.

Barbara: Where did you find inspiration for Dysphoria: An Apache Dance?

Britney: I started the path to creating Dysphoria as a writing challenge to myself. I decided to look through the current events in the media at that time and write a play. I ended up finding this article about two women in Salinas California who were lovers and helped one another play out one of the worst child abuse cases in Salinas. The children were emaciated, locked in rooms and chained to the floor for days. As I read the story , horrified, I began to wonder what would compel two women to these extremes. In society, women are “supposed to” be nurturing caregivers, but “supposed to ” is a difficult phrase…I wondered what happened to these women before this incident, that lead them to commit this crime. At first, I decided to write the twisted love story of these two women leading up to the crime, and that was cool, but still felt very surface. Also I love Apache dances, which are violent Parisian dance of the underworld, because they are emotional, sensual, spiritual are rarely used in plays that include dance.

Barbara: What has been the most challenging aspect of writing the play and what got you through it?

Britney: I think the hardest part for me writing Dysphoria was the decision to scrap the facts in the article and write the story from the heart. Originally, I was trying to stay true to the events and facts but the moment I decided to claim the story creatively, as my own, was the moment my own personal connections to the theme became clear and ideas for how to weave in folklore came flooding in. The story opened up when I did.

Barbara: Any interesting discoveries or trajectories you went down that you didn’t expect?

Britney: After a few rewrites and staged readings, I decided to explore mother daughter relationships, alongside romantic relationships because the way one is raised, the experiences/relationships one has as a child influence and affect one’s experience, relationships and perception of the world as an adult. The whole play changed drastically after that.

Barbara: Tell me about the current state of theater — what do you see happening?

Britney: Well, I hear a lot of talk about diversity and inclusion and sometimes I see some of it on stage. It’s a new and trendy thing to add women, people of color and color-blind casting to a season….really? Don’t get me wrong, I support the venues where the work is being done, I just think it’s sad that in 2016 we are still figuring out the how’s of diversity and inclusion in Bay Area theatre.

Barbara: What aspect would you change and do you see any ripe opportunities that we could take now to move us forward?

Britney: I think great theater should be for everyone, not just the people who can pay. I’d like to see a theatre structure where the experience is affordable, reflects the diversity of the communities they serve, creates opportunities for social commentary and healing, makes a real effort to support local artists and includes stories for, about and by women and people of color in every season.

Barbara: What advice do you have for people who want to do what you do?

Britney: Lol. This is the advice I give myself: Keep the faith. Believe in you. People say sh*t, good and bad people say sh*t. Don’t let it make or break your spirit. Please yourself first and no matter what, keep writing. Pay attention to what feelings come up when you are writing. When you as the writer are feeling sensitive about something in your piece, explore it, it’s gold.

Barbara: And also, any bad advice that might be good? or simply something to avoid/ignore. 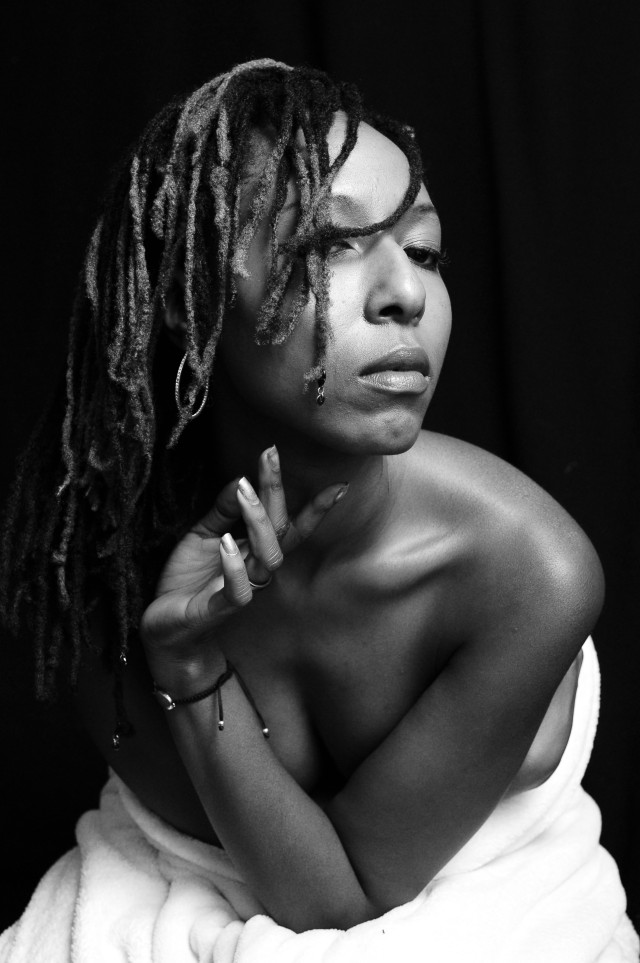 For more on the reading–visit the Museum of the African Diaspora (MoAD) located at 685 Mission Street at 3rd St. in San Francisco, www.MoADSF.org. The reading is tomorrow, February 20th from 2-5 PM.

LHT’s staged reading is FREE with full day General Admission to MoAD – $10 Adults/$5 Seniors & Students. MoAD admission is FREE for LHT Subscribers and MoAD members with an RSVP to (415) 318-7140 or egessel@moadsf.org.

For more on Britney Frazier, check out Britfrazier.tumblr.com.

One comment on “The Real World – Theater Edition: Britney Frazier”