Sam Bertken steps in to guest write and interview Joan Howard and Rebecca Longworth, the producing/directing team behind “Aesop Amuck.”

A few weeks ago, I took some time after a weekend rehearsal to sit down with Rebecca Longworth and Joan Howard, the collaborative force that founded Samuel Peaches’ Peripatetic Players, winners of the 2013 Best of SF Fringe Award for “O Best Beloved,” a devised adaptation of Rudyard Kipling’s Just So Stories. Sprawled cross-legged on the mats at the Main Street Theater in the Excelsior, I got to know more about what drove them to start the company, the source of their passion for children’s theater, and why audience participation might not be something to dread.

SB: What in particular draws you to staging children’s literature, adapting them for the stage?

RL: What draws me to children’s literature… I think, because it’s imaginative and kind of magical without necessarily having magic. Everything’s very dramatic and colorful and big and broad and also very funny.

JH: I like children’s literature because it always tells a story first. To me, it seems like the stories and the characters are the most important thing. For example, between that and adult literature. A lot of adult literature has, “I’m the author telling the story and I’m going to talk about myself as the author,” and I’m like, “I don’t want to hear about you, I want you to tell me a good story.” 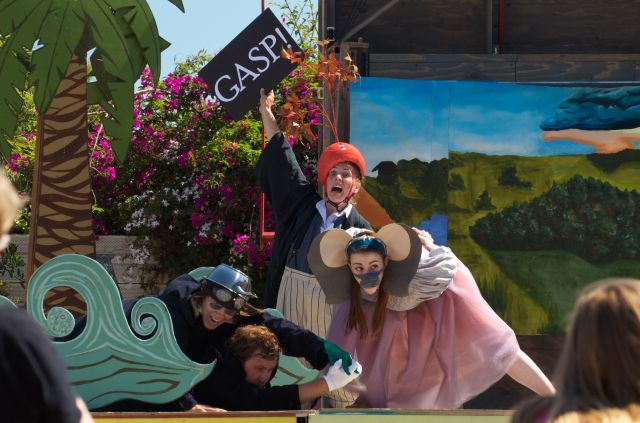 SB: So the genre sort of naturally predisposes it to the stage?

RL: I mean, it depends on what the particular work of literature is but in this show in particular, in Aesop’s Fables, there’s actually a lot less color and detail which means that there’s more room for imagination.

SB: Have you always done this kind of adaptation work with this specific genre or specific adaptation style? Or is this relatively new within the past few years?

RL: In terms of adapting children’s literature to the stage, it started in 2013 when the two of us wanted to do a show together and we were trying to figure out, “Well, what kind of show would we want to do?” And of course Joan was like, “It has to have a story! F**k this non-linear narrative b******t!” You can transcribe that as well.

SB: I totally will.

RL: And I was like, “Well, I’ve always wanted to adapt fairy tales and we were talking about what we like, shows that we really liked.”

JH: And stories we read as kids. 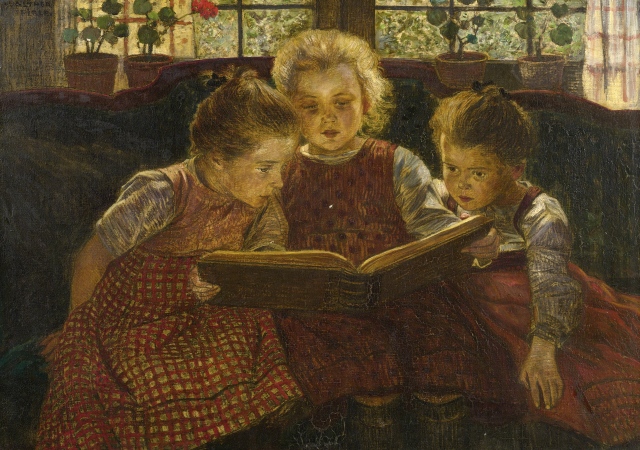 Nothing beats a good faerie tale, after all.

SB: What were those?

RL: The ones that are illustrated by Mercer Mayer that have the little monster. Little Critter’s Mother Goose was the one that I had and in it he’s putting on a show and all of the scenery are flats with stamps on them saying, “Rented From Joe’s Costume Rental.”

JH: Talking about like aesthetic visual also brought in the idea of medieval pageant wagons and Renaissance theater and how the scenery moved with simple mechanics.

RL: There’s also this more sophisticated sense of humor that kids actually get, which I see in The Muppets a lot. At first you’d think, “isn’t that a little a little sophisticated for a kid?” But it’s really not at all.

The complex discussions of the Muppets cater to all

SB: Why children’s theater? Why is this art important to make?

RL: I think the reason it’s important is because of the way in which we’re doing it. By taking it on this wagon out to a park and setting it up and doing a show and then packing it away and leaving, this show has a higher percentage of people i’ve never met before that have seen it, so it means that like our work is being seen by entirely new audiences.

JH: Instead of our friends just coming to our show to support us.

RL: Right, which, as we all know, is something that plagues the theater community. In other shows, we’re doing it for our friends to come see on their off nights. I think this show is really important because we both have this love of public space.

JH: It’s this spontaneous delight. To me, it’s the magic that harkens back to when the circus came to town. People were like, “Oh my God, the circus is in town. There are the great tents and we’re actually going to make a date with our family to go out and do this thing that we don’t normally do, and experience our community and our town square or our field out next to the schoolhouse where they’ve set up.”

RL: I’m really interested in having interesting, fun, cool and also family accessible events happening in smaller parks. We could do a free Shakespeare show but those end up having hundreds of people, and that’s nice and all but there’s less intimacy between the actors and the audience. For sure, they’re accessible in that they’re free and you come with your picnic blanket and you can plop down but you can’t necessarily talk to the actors afterwards.

JH: And they don’t come off the stage.

SB: What’s really important for a children’s lit adaptation? What kind of theatrical tropes should be included?

RL: For me, it’s what i hear from kids that they want to see. They actually want to see how it’s done. They do want to answer questions when you directly look at them and ask them a question. I think it’s refusing to be like, “Oh, we have this fourth wall because we’ve all agreed on this fourth wall and I’m sorry if you didn’t get that memo, five year old.” We’re inviting it to happen.

JH: One of the things that is very important to me are the moments where people really bond as an audience. When you’re in the audience and you want to listen to what the little kid is suggesting. I feel like it really brings people together in a way where they’re actively engaged together as an audience, which is different than just watching.

Unpacking the FluxWagon can prove challenging! Photo by Serena Morelli

SB: What is the biggest challenge of this work?

JH: There’s a lot of challenge in just the logistics of the wagon itself. The realities of having to tote a thing that unfolds into a stage on the back of a truck on a small trailer. The practicality of having something that’s out in the elements over time. I mean, the wood is warping and the floorboards are curling up and there’s this constant upkeep, which is why we changed over time to more durable and technologically advanced material, but it takes away a lot of the heart .

RL: It’s challenging to have a new location every time, too. It means that you don’t necessarily settle into the run. There’s always a problem like, “Oh, no one can actually hear us in this part of the world, the wind’s blowing a lot and there’s always like different—”

JH: There’s a dog under the stage! That’s the challenge, but it’s also the beauty.

JH: As an audience member when i see performers who are genuinely engaged onstage dealing with what’s actually happening in real life, even if it’s not what’s scripted—especially when it’s not scripted—I find that utterly delightful. 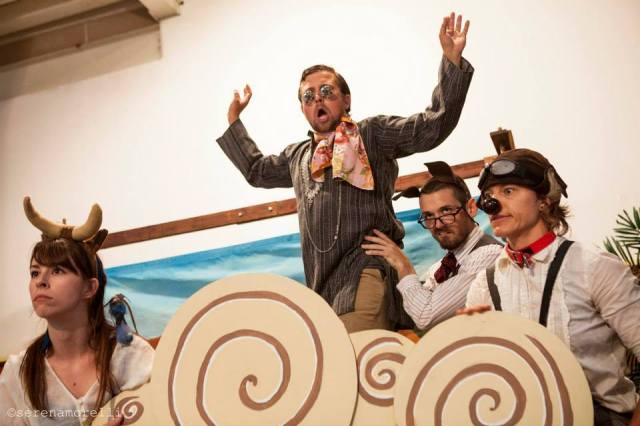 For more information on the current show, Aesop Amuck, including performance times and locations, check out https://aesopamuck.wordpress.com.

2 comments on “Theater Around The Bay: An Interview With Joan Howard and Rebecca Longworth”