Anthony Miller and The Five has the day off, so we’re using this opportunity to announce a new addition to our team!

After the success of this year’s ON THE SPOT short play event, we’ve decided to make it an annual part of Theater Pub, a sort of spring sister event to Pint Sized at the end of the summer. As such, we’ve asked Sara Judge, who helped organize and plan this year’s event, to take on leadership of next year’s, which will once again happen in March.

Sara’s been a part of Theater Pub since the very first year, so we couldn’t be more excited to have her come on board in an official capacity. We’re so jubilant about it, and to ensure some healthy rivalry with the Tzarina of Pint Sized, we’ve come up with a truly grand title for the role: no less than Empress of On The Spot. 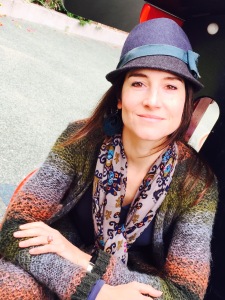 Sara Judge is a theater artist and songwriter. She studied theater at
Rutgers University and spent time training at the Walnut Street Theatre, The
Wilma Theater, and EgoPo in Philadelphia and at ACT in SF. She has been an
actor and playwright in several “Guaranteed Overnight Theater” productions at
The Brick Playhouse in Philadelphia. She directed several plays and staged
readings for the Philadelphia Dramatists Center. Her work as an actress and
director has been featured in the Philadelphia Live Arts Festival. Sara won an
award for “Outstanding Achievement in Acting” as Lila in Ed Shockley’s SUNSET
JOHNSON at the Philadelphia ACT Festival, and first place in an entertainment
slam at the Philadelphia Theater Workshop for performing her song “5 Time
Loser.” In 2008, she drove to San Francisco and never left. She was lucky enough
to find the SF Theater Pub in 2010 where she had the pleasure of directing a
staged reading of Aeschylus’ SEVEN AGAINST THEBES, Ben Fisher’s DEVIL OF A TIME, a folk musical, Sharif Abu-Hamdeh’s CANARY YELLOW for the BOA X festival, composed musical adaptions of Oscar Wilde poems for Theater Pub’s Oscar Wilde Festival and co-wrote OPEN HOUSE for On The Spot 2015. More credits include directing Alison Luterman’s A NIGHT IN JAIL for No Nude Men, Michael Golden’s 90-minute musical ALASKA LEAVIN’ for the SF Fringe Festival, and a solo-performance piece with music for the L.A. based artist Rana Rines. She
co-produced a SOMA Salon, a semi-annual San Francisco theatre and performance
salon where she also developed and directed a staged reading of her original
play. She is a member of the Playwright’s Center of San Francisco. Her play THE
LOSS TEMPLE was produced as part of the PCSF Spring 2015 24hr Play Festival.