Dave Sikula, typing from the trenches.

I write this in a sort of gobsmacked state. As I type these words, I’m painfully aware that, under usual circumstances, I’m doing it at the same moment I would normally be finishing up a performance of “Slaughterhouse Five” at Custom Made Theatre Co. (we close on Sunday the 26th, so there are still tickets). Something happened tonight that’s never happened to me in 42 years of doing theatre: we had to cancel a performance in the middle of the show.

Now, I’ve had performances cancelled – even whole productions. (And don’t get me started on that incident …) I’ve had an actor die (quite literally) in the middle of a run. I’ve worked with actors who were drunk or deathly ill. I’ve performed while being deathly ill myself or even lacking a voice, but the show, as the cliché has it, has always gone on.

Now, I’m not going to go into the exact circumstances. Not only do I not know exactly what happened, but it’s not my place to violate the medical privacy of the actor in question.

What I will say that, whatever happened occurred during a scene change and I was getting ready to come on, so all I saw was the aftermath and another cast member, Sam Tillis, who was the hero of the evening, taking charge in an extremely admirable way, calling for the show to be stopped and doing all he could to get a cell phone and call the paramedics – who arrived within a matter of minutes and really took charge.

The stage manager came down from the booth, assessed the situation and made the announcement that, basically, there was nothing we could do and we were going to have to cancel the rest of the performance.

After a few minutes, the audience pretty much cleared out, even the friends and family who were there – and for whom I felt especially bad, if only because I know them. We got out of costume, and the cast kind of stood and sat around, trying not only to sort out our feelings, but also what we should do. There was, of course, nothing. The paramedics were taking excellent care of our friend (who has, in the meantime, Facebooked from the ER about how the morphine was working well, so that’s a relief), so there was nothing we could do in that regard. There was nothing to be done in regard to the show or the audience, and we were all sort of dealing with – well, not shock (because that’s far too strong a word), but the sudden unexpectedness of it all. As with anything unexpected, we were all left to deal with whatever the hell had just happened and why we weren’t doing the show we were supposed to be in the middle of.

My approximate reaction to the whole situation.

Even now, two hours later, and at a time when I’d normally be home, I’m still sort of gobsmacked. To tell the truth, I felt a little off at the beginning of the performance. We’d had our usual few days off, so I’m sure that was the reason. It was little things; nothing major, and probably stuff no one else would ever notice, but then one’s perception of one’s own performance is always different from everyone else’s, isn’t it?

Anyway, we’re probably due for some changes in the show Friday. I can’t imagine it’ll be business as usual, but it’ll doubtless be interesting.

“The Magic of Live Theatre,” indeed. 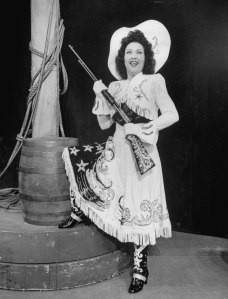 Editor’s Note: The following is a statement from Custom Made Artistic Director Brian Katz:

Brian Katz here, Artistic Director of Custom Made. To add to the weirdness of the night, I was over 3,000 miles away when it happened. Texts started coming in flurries at 11:40pm Eastern time, and kept buzzing until 2:30am when everything seemed stable. I want to take a second to shout out to my wonderful staff and actors for handling the emergency as well as I knew they would. We are blessed to have so many wonderful professionals that work with us, and whose support of each other knows no limits.

To update the situation, the performer in question is resting and is feeling better. She plans to go on tonight in a limited capacity. For those of you who have seen Slaughterhouse, you know it is a complex show where everyone is involved in the 50 transitions that occur over 100 minutes, but I know my amazing artists will figure out a solution. Also, we are reaching out to everyone who was in the audience last night, asking if they wish to attend one of our final performances (until Sun.) If they cannot, we will offer tickets to any of the shows left in Custom Made’s 2014/15 season.

A final adage: my mentor in college once told me the only reason people go to the theatre is because someone can die on stage. I truly believe that. This is the difference between our art form and many others; these are real live people up there, and because we are all this mess of atoms and organs and cartilage, anything can happen at any time. It is dangerous; therefore, it is thrilling. What is even more wonderful is that when the unexpected happens we always pull together, and make sure the show does, in fact, go on.

2 comments on “It’s A Suggestion Not A Review: Actus Interruptus”