Charles Lewis III returns to talk about his first time working behind the scenes at the SF Fringe Festival. 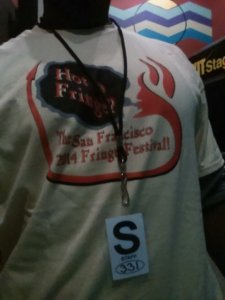 “Clowns are the pegs on which a circus is hung.”
– PT Barnum

We’re always told that first impressions count for a lot; that you can’t make them twice; that they will forever define you in the eyes of the other person, whether they admit it to you or not. So naturally I wanted to make the best impression as a new house manager at SF Fringe. I’ve always been one of those folks who believes that I don’t just represent myself, but also the company whose logo adorns my shirt/name tag/pay stub. I mean, they don’t just give this bright yellow shirt and laminated badge to just anyone, do they?

So as I stood in front of an anxious, impatient audience, I can only imagine what they thought of the stammering schmuck in front of them. I’m an actor, I thought. Talking in front of audiences is what I do. I should thank them for coming, right? Now what? Something about “the State of California” and fire exits? Oh, oh – phones! I’ll take out my phone… and I dropped it. It broke apart. “But as you can all clearly see: it’s off.” Oh God, I’m dyin’ here. What next? Why am I holding this bucket again? Oh yeah, we want them to donate! Tell them I’ll be out there when they’re done. Or someone will be out there. Someone with a yellow shirt and a laminated badge. One would hope. Damn, I’m cutting into performance time, aren’t I? Just say “Thanks for coming” and chase your dignity out the door.

I raced out the door now fully aware that the “acting” part of the brain is separate from the “curtain speech” part. I felt like slapping my forehead so hard that it would be heard three states away. Instead I shuffled into the greenroom/hospitality suite and shoved a handful of microwave popcorn into my face. The pictures of Clyde the Cyclops on the wall helped. Thus began my tenure at the 2014 SF Fringe Fest.

But then, Clyde makes all things better

It’s kinda odd that when I eventually wound up at SF Fringe, it was in this capacity. I was actually supposed to be in a show in (I think) 2007. It meant a lot to me I’d just gotten back into acting two years earlier with film work and this was to be my first theatre experience since school. I didn’t see eye-to-eye with the director and wound up quitting over the phone, something I haven’t done before or since. Even though one of my would-be fellow actors was an actress I’ve gone on to admire, I didn’t bother to see the actual show or anything at the festival that year. I actually haven’t even been to the festival since as I’m always knee-deep into a show at the time. It seems like everyone I know has encouraged me to see certain shows and skip others; some have even offered to cast me. Alas it took about seven years for me to finally get my Fringe on.

And hoo-boy, was I thrown into the deep end on my first day. In fact, I’d say I was blindfolded, handcuffed, and kicked off the plank into shark-infested waters after receiving fresh cuts on my arms and legs. But then, I’m fond of analogies. Nevertheless, as someone who has done front-of-house work at countless theatres, cinemas, and concert venues, not even I was prepared for the onslaught of countless indie theatre patrons clamoring to get into a theatre for which 80% of the tickets are already pre-sold and half of those patrons haven’t arrived 10 min. before curtain. People get angry. They get impatient. They look for an excuse to take their frustrations out on someone and, as house manager, that someone will be you.

Now these folks have my empathy, every single one of them. After a pretty disastrous first day, I quickly got into the swing of things and made it my priority to communicate that above all else, we are trying to help YOU. The final day of this year’s festival I had to deny entry to show to that show’s director. She’d travelled “all the way from Santa Cruz” with her boyfriend and was told by the show’s performer to just give her name at the door. Well the only names we have at the door are on the will call list and this one was packed. The show completely sold out and I told the director how sorry I was. “If anything,” I said, “this should be a testament to how good your show is.” Directors have been shut out of their own films at Sundance. Is it more important that you see your work or that the audience does?

But we do have an arts ‘n crafts section you can use.

Thankfully, as the song says, you get by with a little help from your friends that served me well. Stuart has already mentioned Christina and the wonderful folks who keep the EXIT and Fringe gears moving as smooth as a Swiss watch, and bless them for that. When you’re an apple-green newb trying to figure the best way to tell someone the “No Late Seating” rule is in full effect, it really helps to have an even-tempered Ariel Craft standing near to back you up. And what I would have done without Florian on-hand, I don’t know.

And let us thank the Theatre Gods for the aforementioned hospitality room. Not just a place for patrons to chew popcorn, sip lemon water, paint domino masks, and have their photos taken as “Fringe Royalty” (yes really) – the area might be most valuable to Fringe staff. When not in the middle of the mad rush of patrons, the near-silence of green room makes it almost seem like 30-minute day spa. I don’t know of many day spas that play The Cranberries over their speakers, but more should. Taking time out to chat with Stuart, Barbara, Tonya, and Quinn about… whatever, I remembered just how valuable such moments are, and have been for me over the past year. Having spent most of the summer sequestered from both Facebook and most of my regular theatre friends, the time I’ve spent reconnecting, reminiscing, and, yes, gossiping have been invaluable.

What, did you think I was kidding about the throne?

I arrived really, really late to the Fringe closing party this past Saturday. I’d gone to a friend’s party in Oakland, which was a lot of fun. By the time I caught up with my fellow Fringers at Emperor Norton’s, most of them had already left and the others were on their way out the door. I had a few of the leftover hors d’œuvres before heading out myself. Still, the Fringe has left its mark on me. Though I might not necessarily agree that The EXIT is akin to a used record store, I do agree – and have been saying aloud for years – that it is the true heart of the San Francisco theatre community. The ACT and Berkeley Rep might be akin to fancy hotels, but The EXIT is home. And the SF Fringe Fest is akin to opening one’s home to both regular friends and out-of-town guests. Or at least a decent hostel. There might not be an Olympic-sized swimming pool, but the activities are fun, the guests are… unique, and you’ll definitely tell all your friends when you get back home.

Charles is happy to be a part of Fringe royalty. He shall be calling The EXIT his home for at least the next month as he begins rehearsals for Stuart’s new play Pastorella.