Dave Sikula lingering in the kingdom of Aaron Sorkin.

When we last met, I was in the middle of describing the whole “Farnsworth Fiasco” in Palo Alto

There were developments at the first Thursday performance, though, but not in a direction I ever would have expected – in two regards.

But I’ll get to them in due course.

So this group of protestors (with their own website: http://www.farnovision.com/. See what a great guy I am? To give them a free plug like that?) began a media-saturation campaign, writing letters to make sure the Bay Area’s various newspapers and television stations were aware of the miscarriage of justice that we were about to perpetrate. (Think I’m exaggerating? Look at the letter from Philo’s great-granddaughter on that site – and that’s mild compared to the version she sent the theatre.) 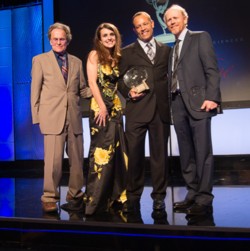 As far as I can tell, all but one of those outlets ignored the letters. The San Jose Mercury-News decided to follow up, however, and not only gave us an online slide show, but also a front-page above-the-fold feature (and that’s the front front page, not the arts front page).

All this agita could have turned sour, but the PAP management took the initiative of approaching the protestors and addressing their concerns – even adding links and information about their cause and suggested reading to the theatre’s website. They still planned on protesting opening night, but were made aware that we were – and are – on their side. Even though we can’t change the text of the play, we’ve made sure that Philo gets his due credit throughout the evening.

Phil himself. I used this image twice in the show.

Now, in spite of what could have turned out to be an ugly situation – our trying to shut down the protestors or ignoring them or mocking them – it all turned out to be a win-win. Not only did the group get its message out, but ticket sales soared. (Our houses for all twelve performances averaged about 300 each, very good for a straight drama in my experience, and above the company’s expectations for sales.)

All of this said, though, we had no idea of what to expect on opening night. We knew they had plans to assemble in the forecourt of the theatre, as is their right, to distribute literature and make sure the audience knew the facts (or, at least, the facts as they see them). We were told they had bought tickets, but had no idea if they planned on disrupting the show when the incorrect – or “ahistorical” might be a better term – verdict came down. We made plans on how to deal with any disruptions (basically, “freeze until it’s over; wait for the house staff to deal with it”) and got ready to open.

The forecourt of the Lucie Stern Theatre — the scene of the non-crime.

Our Friday preview went quite well, thank you, but Saturday (being the actual opening) was the key day. We got word before the show that they were indeed out front, so I went out to see and meet them (along with members of the PAP staff). Much to my relief, the “protestors” couldn’t have been nicer. They were mainly older folks, but bright, friendly, and enthusiastic. Some had signs, but they all had handouts detailing their objections. I spoke to a couple, and they were just really nice people, not at all combative or obstinate – and, in fact, not all dedicated to “the cause.” (One man told us that he really didn’t know what all the fuss was about, and that he’d been asked by his next-door neighbor to come to the theatre and hold a sign.) In light of all of this, we don’t expect them to cause a ruckus when they do come to see the show – whenever that is. (At least one of them was at the second Thursday night show, and was just as nice after the show as they were Friday night. He was very complimentary, as well.)

Thanks to the front-page story, Sorkin himself finally responded to the situation. (The theatre had tried contacting him through his agents to ask about some things in the play itself. We got no response, but I guess the siren call of the media was too much to resist.) Short version: not only did he not know about either the production or the protests (both perfectly acceptable and believable), he didn’t understand all the fuss. He thought he had done all he could to paint Philo as television’s father and Sarnoff and NBC/RCA as outright villains trying to steal it. Watching the show that night with his words in my head, I could see how he was doing that, but in such a way as to allow for the other interpretation.

The story doesn’t end there, though. As I mentioned above, the Farnsworth family added its own two cents (as they’re entitled to do), but what isn’t mentioned is a family situation that we apparently provoked. But I’ll deal with that next time.