Jeremy Cole returns for a second round of guest editorialship.

How many times have you heard (or said) “Well, there’s no accounting for taste?” A million? A trillion? It’s a cliché that will never die so long as people disagree on plays/books/films/fashion/[insert-pretty-much-anything-that-suits-your-fancy-here]. It’s an easy way to dismiss a point of view that doesn’t jibe with your own. 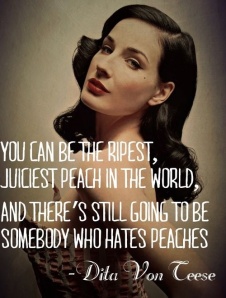 I’ve used the phrase myself. Repeatedly. Redundantly. Ad nauseam. But a couple of recent incidents have made me reconsider this tired old saying, and after some thought (and much searching of my tortured soul) I have decided to retire that phrase from my databanks. I have decided it’s time to take taste into account. Let’s start right now, shall we?

The news is (drum-roll, please…) that everyone has different tastes. (Wuuuuut? I know, right? Shocking! Revolutionary! Who knew?) On the one hand, that statement is so obvious as to be embarrassing, but on the other, that doesn’t stop us from saying “there’s no accounting for taste” with a practiced sneer, by which we really mean “there’s no accounting for HIS/HER taste,” by which in turn we mean: “I am RIGHT and he/she/they are WRONG.” This is a Black and White Zone. No gray areas need apply.

A case in point: The Phantom of the Opera is the longest-running musical in Broadway history. It has been translated into a scad of foreign languages and never fails to pack ‘em in. If there’s one musical that EVERYONE loves, it must be Phantom, right? Wrong. I loathe that show. (Okay, I’ll grant that I kind of like Madame Giry, because she seems to be as underwhelmed by the piece as I am, but other than that…) I would love nothing more than to attend it with a gun so I could use the entire show as a shooting gallery – picking off all those characters I hate one-by-one until only Madame Giry and I are left standing. Then we’d go for a drink and eulogize the dead with much snide laughter.

Phantom is simply not to my taste. But if I mention this to a Lloyd Webber acolyte, he/she/it is instantly disgusted with me. They act as if I must be broken. “WHY?” they ask, “Why don’t you like The. Greatest. Musical. Ever. Written?” And they expect me to delineate my reasons (as if they would even listen to them). But art – whatever its format – isn’t something that can be tested empirically (or we’d all simply follow the formula and produce masterpieces).

It comes down to this: Phantom is based on a 19th century pulp fiction potboiler, and I’m just not a fan of that particular type of melodrama. Things gothic don’t float my particular boat. (A dinghy, if you must know. Because I like saying “dinghy.”) Phantom eludes me. I don’t understand what the mutant guy in the mask sees in that vapid-even-for-an-ingénue-and-that’s-pretty-vapid Christine. I want to swat Meg Giry with a human-sized flyswatter. Raoul is so flat and dull my brain goes into hibernation mode the second he walks on stage. It doesn’t matter that the singing is impeccable, the acting terrific, the orchestra magnificent…if the material doesn’t do it for me, the most amazing production values are not going to change how I feel (though, admittedly, they may make it easier to sit through).

And yet, people seem to take it as an affront – a personal attack on THEM – if I don’t share their taste.

Those hyper-sensitive fools, I say. And yet am I really so different? That would be a big fat “NO.”

I was recently in a production of a play that ran three hours with two intermissions. Some friends came one night and left during one of the intermissions. I was hurt that they didn’t like the show enough to stay to the end. I was hurt that they didn’t text me or even Facebook me some excuse (“So sorry, I came down with Ebola and had to leave right away to sponge the blood from my eyes”). But the truth is: the show was probably not to their taste. Why did I take it personally? I didn’t write the show. I didn’t direct it. I was only a supporting role in it, so I shouldn’t take their exit as a diss of my performance (at least, I don’t THINK I single-handedly destroyed the show…), and if I were to be completely honest, the show is not of a genre I care for myself. So I probably wouldn’t have attended the show AT ALL were I in their shoes. Hmm…maybe I should try taking their tastes into consideration.

Gee… Ya think? (This is what passes for a “Eureka!” moment in my world.)

And then, not even one full week later, I had a reading of a script that I did write. All by myself. So I had a bigger investment in it, you might say. After a lively discussion, one of the actors gave me a ride home and continued to talk about my play. I was pleased by this, because he was the one initiating the discussion – he was interested enough in the play to continue chatting about it. I felt validated. I felt I was on the right track with this piece. Then that proverbial other shoe fell. (Fucking proverbs.) He told me that the play reminded him of a play he saw recently that was just FANTASTIC. It was called Ghost Light, he said. They did it over at Berkeley Rep…had I seen it?

In my first post for this blog (on “Creative Vilification”), I mentioned this play. And let’s just say…it’s not to my taste. (Okay, that’s disingenuous: that play is its own circle of hell in my eyes. As I sat watching it, I thought “Wow, this must be what waterboarding feels like,” and “Gee, Gloucester in King Lear had it EASY.”) So imagine the heights of ecstasy I felt at having my own work compared – favorably – to Ghost Light. My heart pulled a reverse-Grinch maneuver and shrunk two sizes. My stomach twisted into a perfect Gordian knot. I found myself caught in a tangle of hyperbole. Not unlike this essay. How could I account for taste in this instance? A moment before, I had been happy with the work I was doing on my play and the input I had received on it. Then there I was, listening to someone compare my work to a piece I hated so much that my bile rises all over again at the mention of its name…

Can one share the same taste with another regarding genre (in this case, docu-drama), yet differ that greatly from him vis-à-vis content? I suppose so… I HOPE so. What a sly, conniving little vixen is this thing we call “taste.” I have always been one who is up for a fight (sorry, I mean, “lively discussion on differences in opinion”), but I have too often tossed aside others’ viewpoints with that catch-all phrase I discussed earlier in this piece. Maybe I’m mellowing in the second half of my own personal century, but I think I’m ready to give up that convenience. I’m actually interested in accounting for taste. I’m ready to ask the big questions. For instance, I want to know what people see in Phantom that I do not. What was it about Ghost Light that worked for those who –gulp- liked it? And why, oh, why do people keep producing Glengarry Glen Ross? (Which I like to refer to as “G-G-G-Ross.”) And speaking of taste…what is the deal with kale? Is that even a food?

2 comments on “Theater Around The Bay: A Matter of Taste”