Our guest blogger series continues with a piece by John Caldon, who as a child was perpetually in trouble for talking back. Not much has changed.

Talking to an artist about their developing work is like having the opportunity to critique someone raising a toddler. While on more than one occasion I’ve wanted to tell someone their two-year old is an asshole, I know better. But the same doesn’t hold true for commenting on a colleague’s still infant play. I’m allowed to call that an asshole. I’m encouraged to say it’s a little slow, or socially inept, or a missed opportunity to exercise our constitutional rights established under Roe v. Wade.

As a creator and consumer of theater, 10% of my time is spent making plays and 90% is spent talking about them. That being the case, I reveled in Jeremy Cole’s contribution to this blog series about creative vilification. All too often we hear “that sucked” passed off as actual criticism, when really we want to walk out of A.C.T. and say “that was the best middle school pageant I’ve ever seen!” No offense intended to middle schools anywhere. That being said, more often than not I find myself talking to people I respect deeply about their own work. And not just their work, but work of theirs that was mounted with full knowledge it would somehow fail, such as readings and workshops. The most satisfying part of belonging to a motley crew of independent theatre artists in San Francisco is participating in conversations around developing work, which is unveiled for the public in an unfinished state because as we all know, you can’t finish a play unless you show it to people before it’s finished.

But there’s a vast difference between what I might say after watching AMERICAN IDIOT, which I detested, versus hearing the very first draft of Stuart Bousel’s adaptation of RAT GIRL, which was problematic but deliciously promising. That difference is rooted in my desire to assist in the improvement of a developing work versus my desire to knock someone’s artistic hubris down a peg (or three). And this is where things get complicated. Having staged twelve new full-length plays in the last seven years, five of which I also wrote, I’m very accustomed to giving and receiving notes. I also figured out a lot about the art of feedback as a student in the Creative Writing department at SFSU, the year-long online screenwriting class I’m taking through UCLA, and the various talk-backs I’ve participated in over the years, which have left me with low grade PTSD. Why is that? Because though we’ve all developed processes for acting, writing, directing, designing, producing and managing, what most of us lack is a process for giving feedback. I’m talking about constructive feedback. Feedback designed to help, not hinder. Because burning something down is easy. Building it takes finesse. 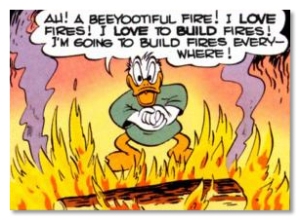 In the interest of building things, I’m writing to give away a process for providing feedback I’ve developed over time. I’ve used it when talking to artists and leading talk-backs and find it allows for capturing all types of input while promoting active conversation. Feel free to use it or ignore it. After all, that’s what we do with most things, right? So here are the four questions I address in the order written to help focus my conversations:

1. What worked and how did it make you feel? What images, language, moments, humor or poignancy really stuck with you?
2. How did it make you think? What themes, ideas and concepts did it prompt you to consider?
3. What was left unanswered? Were there questions intentionally left unanswered by the artist? Was anything confusing?
4. What did not work? What could be improved, changed or cut?

In my experience most people tend to do this in the reverse by starting with what didn’t work, followed by what confused them, moving on to what thoughts their confusion prompted, and finishing up with what they liked. The problem with that approach is twofold.

First, the writer must know whether or not their intended message has landed before any other note is relevant. If the answer to the first question is “I loved your romcom twist on Macbeth in which Lady M becomes a manic pixie dream girl and the King is reimagined as the Mayor of Jersey City,” when the writer was trying to create a heady drama about psychological abuse in modern relationships, then it’s clear from the outset the writer’s goal was not accomplished, or the person giving notes is farther from the target audience than Sarah Palin is from Russia. Either way, any note after that is pointless.

Secondly, while I’m all for artists having a thick skin and think we should be able to take heavy criticism without shutting down or clamming up, it’s not our job to cut our colleagues so they can get used to the knife. They’ll get enough of that from the world, so feel free to treat them kindly without fear you’ll coddle them into being too soft to take a punch. Starting with what worked is a sure fire way to be heard when you’re talking about what didn’t.

Moving on from there to questions two through four allows for exploring themes, asking questions and dropping bombs. The difference in saving the bombs for last is the receiver can place them within the context of what they already know to be working or not. They’re also far likelier to absorb the criticism than to just grin and bear it.

Providing feedback is a skill necessary to an art form as collaborative as theater. We create, criticize, revise and retry in an endless loop. I’ve found this process for feedback has helped me give notes to colleagues and collaborators. For me it’s also replaced the excruciating talk-back scenario of people being invited to ask random questions, which invariably leads to forty-five wasted minutes I’d rather spend eating glass or cutting myself. Next time you have a talk-back try leading your audience through these questions instead, then write me a long email of profuse thanks.

Or you can just keep doing it how you’ve been doing it. I mean, theater has survived this long with no defined process for giving feedback, so perhaps it’s not working all that badly. Plus there’s something incredibly cathartic about calling a two-year old an asshole.

John Caldon is Artistic Director of Guerrilla Rep, a San Francisco based independent theater company. Check out their latest offering, MOMMY QUEEREST, playing at The EXIT Studio from February 28 to March 29 as the overture to this year’s DIVAfest.

3 comments on “Theater Around The Bay: We’ll Fix The Title In Post”