Marissa Skudlarek rebuts Peter Hsieh in a move we shall call, from this moment on, “The Double Skudlarek.”

The Palm Court of the Palace Hotel, downtown San Francisco. Marissa and Other Marissa sit at a table drinking tea. They are wearing beautiful floral-print sundresses and really fantastic hats.

MARISSA: So, Other Marissa. Thanks for joining me.

OTHER MARISSA: My pleasure!

MARISSA: It’s nice to be able to argue with myself out in the open.

OTHER MARISSA: Indeed, because as Tom Stoppard once said—

MARISSA & OTHER MARISSA (simultaneously): “I write plays because dialogue is the most respectable way of contradicting myself.”

MARISSA: Of course we would both know that quote.

OTHER MARISSA: Of course. After all, I’m you.

OTHER MARISSA: Yeah. So, whatcha drinkin’?

MARISSA: Earl Grey – my usual. And yourself?

OTHER MARISSA: No really you have to try it, it’s amazing.

Marissa takes a sip of Other Marissa’s tea.

OTHER MARISSA: I know, right?

MARISSA: So this means that this is a scene with “two women having tea and talking.”

OTHER MARISSA: OH NO SOMEONE ALERT PETER HSIEH.

MARISSA: But that’s why I invited you here today, Other Marissa. If Peter can have drinks with his doppelganger, why can’t I?

OTHER MARISSA: Why not, indeed? 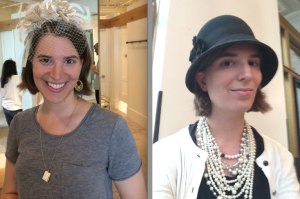 MARISSA: I read Peter’s article on Monday and I thought he made some good points, but they got buried under a lot of, um, how to put this—

MARISSA: You don’t mince words, Other Marissa; I like that about you.

OTHER MARISSA: I do my best.

MARISSA: But, anyway, I liked what Peter had to say about producibility and how much we should – or shouldn’t – take it into account when writing.

OTHER MARISSA: Yeah, I feel like if you and I sat down with Peter and Other Peter, we’d all pretty much agree about that. It’s deadly to theater, as an art form, if every newbie playwright feels like the only thing she can write is short plays with small cast sizes and simple sets. Where’s the fun in that?

MARISSA: Although I’d probably interject that some constraints and limits can actually spur creativity. A blank page can be daunting, and you don’t always have to color outside the lines to make great art.

OTHER MARISSA: Also, Marissa, I’ve noticed that you strive for balance in your craftsmanship – a play of yours might contain one “unproducible” element, but not four or five.

MARISSA: You know me so well. Yes, I did that on purpose in my play Pleiades. I realized that it required a large cast, nine actors – and I wasn’t going to compromise on that. But I could make sure that the technical aspects of it were as simple as possible. There are only two sets, the costumes and lights don’t need to be complicated, there aren’t any crazy special effects… and I still told the story I wanted to tell.

OTHER MARISSA: That’s the play you’re producing this summer, right?

OTHER MARISSA: And then a tennis ball bounces onstage and smashes into the tea service.

MARISSA: Yeah – I still don’t know how we’re going to stage that, night after night.

OTHER MARISSA: But didn’t you say that you “kept the technical aspects as simple as possible”…?

OTHER MARISSA: Or “bros drinking brews”! Those kinds of plays can be just as boring.

MARISSA: Right! But they never come in for the same criticism. Guys with beers are “cool”; women with tea are “boring.”

OTHER MARISSA: And that wasn’t the only weird gender issue at play in Peter’s article. For instance, he tried to start a dick-measuring contest with himself—

MARISSA: Which is not something I would ever do with you, Other Marissa—

OTHER MARISSA: —and not just because we don’t have dicks—

MARISSA: Or, how he has the “hot twins” walk into the cafe at the end of the scene – that is such a male fantasy…

OTHER MARISSA: Oh come on, everyone likes hot twins!

OTHER MARISSA: Admit it, you wouldn’t mind if the Winklevoss twins walked in here right now.

MARISSA: Yes I would. The Winklevosses are doofuses.

OTHER MARISSA: Don’t you mean “the Winklevii are doofii”?

MARISSA: And then I worry that complaining about Peter’s article makes me seem like a humorless feminist scold.

OTHER MARISSA: I think that we are being rather humorous scolds.

MARISSA: I worry sometimes that I’m uptight and no fun. I worry that Other Peter’s drink of choice, the “Pink Panty Dropper,” is a date-rape reference, and then I worry that I’m being silly and overanalyzing things. I worry that my drinking Earl Grey tea is racist, colonialist, patriarchal, classist, and Anglophilic; and that I ought to be drinking fair-trade shade-grown coffee. I worry that the setting I’ve chosen for this imaginary conversation, the Palace Hotel, marks me as an inveterate elitist. I worry that at this very moment, buildings are burning and people are dying in the streets of Kiev and Caracas, while you and I drink tea and chat about art. I worry—

OTHER MARISSA: Marissa. Marissa. Calm down.

MARISSA: I can get into these moods of spiraling anxiety—

OTHER MARISSA: I know. I know.

MARISSA: If I prefer to write from a female perspective, or discuss women’s lives, or whatever—

OTHER MARISSA: —and maybe you do, and that’s fine—

MARISSA: –then why am I annoyed when Peter prefers to write from a masculine perspective? I mean, he’s entitled to write what he wants to write. He said it himself, and I agree.

OTHER MARISSA: Because there has never been an era in Western history that privileged female perspectives over male ones? Because you’re worried that other people, dudes particularly, will find Peter’s style more attractive than yours? Because you know how important it is, in this culture, to be perceived as cool, and you feel like you’ve never been cool?

OTHER MARISSA: Aren’t they kind of awesome?

MARISSA: OK. Why are you drinking chestnut tea?

OTHER MARISSA: Because great writing requires you to write both from your chest and from your nuts. OK, so the stereotype is that female writers are tender-hearted, compassionate, their pillowy breasts overflowing with the milk of human kindness. And male writers are bold, ballsy, Bukowskian bad boys. But truly great writing will combine those two modes. It will be compassionate but not cloying; courageous but not callous. It will speak truth to power, but it will do so from a place of empathy.

MARISSA: That was… really beautiful, Other Marissa. But I think you forgot something. A good writer doesn’t just need a big chest and big nuts. She also needs a gimlet eye.

OTHER MARISSA: I think I know what that means.

MARISSA: You’re damn right you do.

Marissa and Other Marissa get up and walk from the Palm Court to the Pied Piper Bar. Marissa catches the bartender’s eye.

OTHER MARISSA: Make that two.

Marissa Skudlarek is a San Francisco-based playwright and arts writer. There aren’t actually two of her, but if there were, she could get a lot more stuff done. For more, visit marissabidilla.blogspot.com or Twitter @MarissaSkud.