Allison Page is a survivor.

There’s a tumblr page called SHOW NUFF that just contains tons of “Terrible PR Pictures from Theater of the Unites States” (though they’ve actually started using photos from UK shows as well.) I saw it and went through a range of feelings.

1) This is hilarious. These photos are awful.

3)  Shit…these images are contributing to my biggest problem with theater.

Eventually I got unnecessarily curmudgeony about the whole thing. It started making me kind of angry. Looking through those photos, a person who is familiar with a fair share of theater can connect some dots and start to figure out which plays/musicals these photos are from. (Holy hell, how many companies are doing productions of Boeing-Boeing? Like…all of them?)

Some are kooky door-slamming comedies you probably did in college. Fine. Fair. I can understand those shows having stupid photo representations. But some of them are clearly supposed to be dramas or at least modern plays taking place now-ish. And yet the people in the photos…I mean, they don’t even look like people. I’m not going to calculate the percentage of photos that contain a person with hands-on-hips making a “Why I Oughtta” face at someone who is standing closer to the camera than they are, but it’s GOT to be a high one. I don’t feel like I’m looking at actors. I’m looking at caricatures. They might as well be sketched in bright colors, with over-sized heads and a cartoon background. Something you’d have drawn at the county fair when you’ve been drinking and you and that guy are totally gonna be together forever so you get sketched sitting next to each other and pay $25 for a picture you’ll put up in your room until you break up and then you’ll promptly throw it away and replace its spot on your wall with a Garfield calendar.

How many times have you heard or read “Theater is dead” or “Theater is dying” and had people blather on about it? How many people do you know who have never even seen a play? There are many contributions to be made to the conversation about why theater isn’t as popular as it once was (cost, more entertainment options, blah blah blah) but fuck those, because my problem is that it so often doesn’t seem relevant enough to be important. And we’re not spending nearly enough attention trying to make it feel relevant to a new audience or to…ya know…human beings. And these hilarious images feel like examples to me – examples of what people think of when they think of the words “theater” and “acting”. They look like every ham-fisted college production of Noises Off I’ve seen, complete with slamming doors and wacky takes to the audience.

Oh no, they’re fighting! Gee, I hope they don’t get hurt!

They are filled with farce and lacking humanity. And that’s fine if that’s what you’re going for. I love farce. But I’m also keenly aware that many of the shows pictured are not supposed to be that.

To be honest, I hate production photos anyway. They never look like the show, to me. Or they never look how I want the show to look. And I’ll be the first to say I’m guilty of it as well. I’ve been in bad production photos, and taken bad ones, and produced shows with bad ones. But with everything so accessible today, you take a photo and everyone’s seen it in 24 hours or less. And now that’s what the show is to them. And if they’re not up for a fish-slappin’ goof-fest that’s disconnected from the world – they’re probably not going to come see it. Plays are filled with actors, right? So they should be able to express some sort of human emotion in a photograph, right? As opposed to grimacing as they wind up to punch someone in the face? I’d rather see a more realistic representation of emotion. I know we’re capable, as a whole, of doing that. A community theater production of The Music Man with like 48 children in it? Sure, they’re probably not so worried about that. But we’re putting all this time, energy, and yes – straight up cash – into each show we produce or direct and work so hard on because we love it…but we’re short-changing the representations the public actually sees! Sure, the show may be full of a range of emotions and deep realizations and important comments on modern society or the fate of the future but if this is what the public is seeing, how are we supposed to expect them to care enough to find out?

Just think a little, is all I’m asking.

Theater is relevant. I really believe that. But if a fantastically relevant production falls over in the woods and there’s no one there to see it, is it really relevant? My boyfriend is not a “theater guy”. He hadn’t really seen any plays until he had the misfortune to come skipping into my life. We had a conversation about the topic of this post last night and he agreed with me, saying “Yeah, that’s always what I thought theater was like. Like, silly like that.” as I showed him the SHOW NUFF tumblr. I like to think he’s a little more aware now that theater is a varied array of things – some of which he even likes! But that’s only because I’ve dragged him to things he was sure he would hate, and then didn’t. Why did he think he would hate them? Because they looked ridiculous.

We’re not as out of touch as we look, so let’s not look so out of touch. We’re people making things for ourselves and others and that can be a powerful thing. It’s very possible that you think I’m overreacting about this. All I ask is that you look through that tumblr and ask yourself this question: “At any point in my life, have I ever seen anyone at all EVER do this in the natural world?” 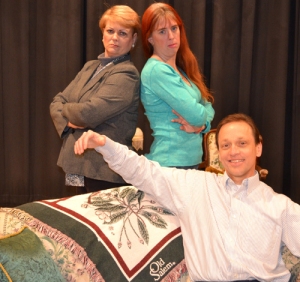 So casual. So cool. Everyone does the back-to-back at parties. CASE CLOSED.

You can see all the hilarious/irritating photos at http://prisdifficult.tumblr.com. It does say “amateur theater” but many of these companies aren’t what I would call amateur, and there are even Broadway show photos included. Nobody’s perfect.

All photos taken directly from the SHOW NUFF tumblr page.

You can find Allison at home on her couch because she just got laid off, which is about the same as finding her on twitter @allisonlynnpage.