Allison Page returns from the Frozen North, with new sagas to share.

Last night, my parents had a conjoined birthday party for my brother and I. His birthday was a couple of weeks ago and mine is next month, but since I only fly home to Minnesota twice a year my mother figured now was as good a time as any.

I’m about to turn 29 (Shut up.) and I’ve been living in San Francisco for over 5 years now – having left because I just didn’t feel like I belonged there, and all of my aspirations were in careers not possible to maintain in northern Minnesota. Sometimes, just like anyone who leaves the place they’re from, I feel homesick. I start to miss my family, my dog (Herbert Hoover, the wire-haired terrier), my friends – and I just want to fly home. And I do love going home, but every time I do that, it doesn’t take long to remember why I didn’t feel like I belonged there in the first place.

I’m shitty at a lot of things, but I’m a good conversationalist. I have that pretty much nailed down – except when it comes to my family.  Last night as the ham, potatoes, melted canola spread (instead of butter) which was poured from a mug with a moose on it, vinegary slaw-substance my Grandma was extremely proud of, BBQ chicken strips and something with radishes in it was being passed around – the chatting began. It was amazingly circular.

Relative: “When did your flight get in?”

Relative: “Oh…so…when ya headin’ back?”

Allison: “Yup! Sure am! Those games don’t write themselves! I really enjoy it, actually. I’m lucky to have a job that still allows my other careers to thrive – you know me, I’m a workaholic! How are you?”

And, generally speaking, that’s sort of how it went. I can’t even count how many times the only topic of conversation was what time my flight had gotten in 3 days before, and when my next flight was leaving. I felt like every time I tried to bring up something else, it just didn’t work out. I tried asking about how they were doing, what they were up to…but I didn’t really get very far with that. It’s like we just don’t know what to say to each other. My inquiries got a lot of blanks stares.  And the biggest, weirdest thing to me was that not one person asked me how any of my creative endeavors were going, or what I was doing with them. When I’m in the Bay Area, almost every person I see asks me what I’ve got cooking next. Including the guy who works at the corner store where I buy beer and pizza, and many people who barely even know me. But not my family. Had they asked, I would have said that I’m producing a full length play which I’ve been writing and working on for three years. To me, that’s a pretty big deal. But I didn’t want to just say, “YOU KNOW…I wrote a play. And I’m going to produce it. Look how fancy I am. Isn’t that SOOO COOOOL?”, because, well…I’d just sound like an asshole. And I think they already sort of think that anyway. If there’s anything I know – it’s my audience. I did stand up for 400 Mormons and didn’t offend even one person – but…everything I say to my Midwestern family feels weird. Like if I say “San Francisco has great burritos.” (which is true, obviously) it feels like they think I’m saying, “YOU GUYS ARE TERRIBLE AND I’D RATHER BE EATING BURRITOS IN SAN FRANCISCO THAN EVER LOOKING AT YOUR FACES AGAIN, YOU BIG BUNCH OF UNLIKEABLE MOOSE-MUG HAVERS!” Which, I should mention, is not at all what I mean. I just like burritos.

A few weeks ago, I was in a movie. Like, a movie was being shot, and I was in it. With well-known people. And I had a real, actual part. With lines. It was fun but also a little tiny milestone in my career – noooo one cares. And then I started feeling like a bad person for wanting them to care about that. Like, what fucking difference does it make to them if I’m in a movie? Maybe it’s the part of me that wants them to understand that I left because it was what was best for me and not because I don’t love them or something. I don’t think I’m better than them, I just think I’ve made the choices I needed to make to have the life I want, but on some level I am really worried that they just think I’m a crazy jerk, and that it’s all been for nothing and I’m a selfish, narcissistic weirdo who can’t be satisfied with the things that should satisfy any person. I understand that our priorities are different; I think I’ve always understood that.

And then I remembered a conversation I had with my grandma Louise a few months ago:

Allison: “Well, I’ve always been the black sheep of the family, anyway.”

Grandma: “Whoever said you were the black sheep?” 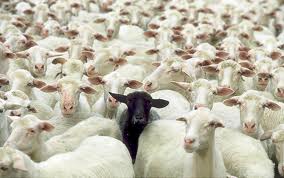 Baa Baa Allison, Have You Any Wool?

And to be honest, maybe that’s it. Maybe I’m the black sheep because I’ve decided I’m the black sheep. Who knows? No, really…who knows? I want to ask the person who knows, because I’m having trouble wrapping my brain around this. It certainly doesn’t help that my family doesn’t exactly embrace “feelings”. I’m only putting “feelings” in quotes because I feel like that’s what they’d want. It just means the feelings are even farther away, when they’re “feelings”. My mother has actually admitted this before, when I was incredibly upset a few years ago and got no reaction because “We just weren’t raised to be emotional.” And so, my freedom with my own emotions has also set me apart. If I’m happy, I’ll act really happy – if I’m sad, I’ll be sad – if I’m disappointed…well, you see where I’m going with this. I feel shit, and I don’t go about trying to pretend that I don’t, whereas overwhelmingly, they like to stay consistently in the middle, where everything is mostly fine. Not really amazing, not really terrible, just…ya know, fine. How they ever bred an actor, I have no idea, because I emote for money. My dad made some comment about a friend of mine whose family situation wasn’t the same as ours – “Don’t any of your friends have normal families?” was his question. My response was “What does normal really mean?” then I pointed out that just last year I found out that my grandmother has a half sister due to my great grandfather’s apparent high school fling which resulted in a child no one heard about until years later. I found this delightfully scandalous, by the way. But I pointed out to him that everyone avoided mentioning it to me for ages, and I thought that was weird. I said outright that I feel like we’re more likely to have secrets and that doesn’t mean that we’re exactly normal, just that we hide the things that make us strange. His response was “Well, we just didn’t think it was important enough to tell you.” We’re not exactly great at communication.

I really like to try to wrap these blogs up in a pretty package, but not everything is like that. I haven’t solved anything. I’m just in the middle of it. Maybe it’s the altitude, because I’m writing this on a plane to Denver to make my connecting flight to San Francisco – which might be the only place where I really feel good about being myself.

Coming from where I’ve come from has made me the person I am, obviously, and has colored my outlook and personality in so many ways. And I’m happy about that. I like who I am (not that I’m quite finished figuring out who that person is), I just wish I knew how to connect with my people better than I do, but my life mostly revolves around the creation of something I’m passionate about, and it just so happens that what I’m passionate about, isn’t what they’re passionate about. Anyone who deals in any part of the arts probably has that issue. But then again…maybe they think we’re connecting perfectly and I’m the only one who feels this way. Just like the black sheep thing – maybe I’m creating this myself.

I don’t know. I love my family. And I love the life I’m creating for myself. And I don’t think those things should have to conflict, but I can’t imagine living without people who share my passion. That’s the thing I love about San Francisco, and the SF theater scene. The passion. I want to jump up and down and get excited about making something happen. I want other people to jump with me. I want us to jump together. I know my family didn’t want me to move away (with the exception of my aunt who couldn’t believe I waited as long as I did before fleeing to California.) and they’re always saying they wish I could stay longer, or that I would just move back – but then when I AM there…they barely talk to me. So what do you want me around for, exactly? I guess they just want me to be there. To just exist in closer proximity to them. Not really to talk to me, but just to have me around. I guess there’s nothing wrong with that, is there? That isn’t so bad. That’s a basic human connection – just being there. As I was eating my ma’s peach cobbler last night, I couldn’t help but think “She’s made this for me.” And that made me feel good. She did that because she loves me and she’s happy that I came home to see them. And then my grandpa asked me when my flight was leaving, and I smiled and said “4…PM.”

Maybe it doesn’t need to be more complicated than that.

You can find Allison this Thursday – Saturday at the Exit Studio for closing weekend of The Age of Beauty – she gets really chatty, you’ll like it.

One comment on “Everything Is Already Something Week 13: Art and the Great Divide”