There’s a certain tragic poetry to Eli Diamond, the youngest person to ever be involved with Theater Pub, making his onstage Pub debut with Pint Sized IV, our last production at the Cafe Royale. Giving the uniqueness of him amongst the more seasoned cast, we thought we’d take a moment to find out what it’s like to be the guy who shows up just in time for the end of an era.

Who are you, in a hundred words or less?

I am Elijah Diamond, a 19 year old actor who used to write “Theater Conservatory Confidential” for this site but is currently in his first SF Theater Pub. I am a born and raised local who recently spent a year at NYU majoring in Acting at the Atlantic Acting School. 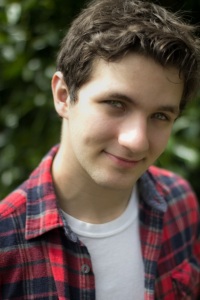 And this is your first time being in a Theater Pub show. How did you get cast?

I had been asked before to do a Theater Pub show, and had been incredibly interested, but, the timing hadn’t worked. Funny enough, the current offer came as a complete shock to me. I was just on the computer minding my own business, when suddenly WHAM! Charles Lewis III sends me a message saying basically “Wanna be in my show for Theater Pub?” And I couldn’t type yes fast enough.

So, you are the youngest person to ever be in a show at Theater Pub, let alone be in Pint-Sized. How is that? Does anyone treat you like a kid?

As “the youngest person to ever be in a Theater Pub”, I was kinda worried that it would be like that, with everyone treating me just as a kid, but I quickly found out that wasn’t the case. I chill with people backstage and around the bar, though of course I don’t and can’t order anything, and I’ve found everyone to be incredibly accepting and loving. It’s interesting, as this is actually the first theater production I’ve been in where I don’t feel like everyone’s treating me like a kid. It’s an amazingly refreshing experience.

Has anyone recognized you as a former columnist for the website?

Sadly no, but I’m partially glad. I feel like if someone did, their first reaction would be “Why aren’t you in an institution right now?

Your column ended with you dropping out of Theater School and moving back to the Bay to pursue other avenues. What have you been up to all summer, and what does the future hold for you?

Recently I’ve been just doing my own thing. I got an internship doing lighting design for concerts, and I’ve been finding myself acting a lot more than I first expected. It’s been nice to reconnect with old friends as well. My future right now is incredibly up in the air, I’m going to see if I can transfer this upcoming year from CCSF, finish my GEs, and just figure out exactly what it is I want to do.

Any dream roles you’re hoping to play? People you are just dying to work with now that you’re back on the West Coast?

There are tons of people who I’m dying to work with. Basically everyone from Pint-sized this year who I wasn’t in a show with. I’d love to work with Paul Rodrigues, Andrew Chung, Annika Bergman, and pretty much everyone. In terms of directors, I’m dying to work with Claire Rice and Meg O’Connor. But I’m pretty open. In terms of dream roles, I used to be really crazy about those, but more recently, I’ve found myself incredibly open in what I get cast as. I find that keeps me from feeling like I’m type casting myself.

On some level, it probably feels like you just got here, and it’s all changing. Any thoughts on that?

That’s exactly how I’m feeling. I’m just like “Awesome, whens the next Theater Pub?” And everyone just throws their hands in the air like “No idea.” It’s a bit disheartening, but I’m definitely going to participate whenever I can.

You’re a young person, and if you didn’t know, the whole theater world right now is dying to get more young people to come to the theater. As a young person who makes theater, and goes to theater, what are your thoughts on how to reach younger audiences?

Honestly, just make it more known that you need and want young people. I just one day went “I’m going to try auditioning for something”, and surprise! Here I am. Young people just think that this is too far of a step away from them, when in reality all they have to do is raise their hands and get involved. Young people making theater tends to make for younger audiences too. We travel in packs.

Any shows you’re looking forward to seeing in the next six months?

I’m incredibly interested in Custom Made’s whole line up this year, most notably The Crucible. I managed to get some tickets to The Book of Mormon, and I’m hoping that doesn’t disappoint. Most of all, I’m just on the lookout for something new to take me by surprise. I like surprises.

You can see Eli and the rest of the Pint Sized cast two more times: tonight, at 8 PM, and tomorrow, July 30th, at 8 PM, only at the Cafe Royale! The event is free, but get there early as we expect to be packed!