Allison Page: once more into the breach.

I’m sitting at home one night several months ago and I decide that since I’m a lazy bag-o-bones I’m going to watch some Hulu. Oh, looky here, it’s TV’s very own 30 Rock! I enjoy a good dose of it, and then a familiar face pops up. Not because I’ve seen this person on the ‘ol boob tube before – but because I actually know this human. And then, naturally, I begin to feel a lot of feelings. (This has happened with several TV shows, several times. Because I’ve been around quite a lot of people in the last 5 years of living here and it’s inevitable. I’m just choosing 30 Rock as an example.)

I present to you, my 8 phases of professional jealousy:

#1 – Good for you! You’re talented and you deserve this!

#2 – I guess that move to New York City really did the trick, huh?

#3 – I’m still over here, though! In beautiful, historic San Francisco, founded June 29, 1776! In the wonderful state of California!

#5 – But seriously, I know how hard you’ve worked- like, really hard. Constantly climbing up the mountain of achieving your dreams!

#6 – Why aren’t I working harder? What’s wrong with me? WHAT AM I DOING? Should I throw myself off the historic Golden Gate Bridge?!

When I tell people than I’m an actor and/or comedian, the response I get a lot of the time is “Oh, well why aren’t you living in New York or Los Angeles?” and though my brain wants me to respond with, “Why don’t you go drink a fresh glass of cyanide?” I usually reply with, “Because San Francisco is a fantastic place to be able to do everything you want without being pigeon-holed. When you’re in LA especially, you need to be able to say exactly what you do really concisely. In a lot of ways, you need to be one thing. If their idea of you is too diverse, they don’t know what to do with you, but in San Francisco I can do everything I want, and it doesn’t take away from anything else.” And that IS really what I think. In some ways, I thought I would nail down what I really want out of my career while I’m here, so that I could choose where to go next, and have a streamlined idea of whatever I want my career path to be. I would probably move to NYC if I wanted to focus on stand up, and probably LA if I wanted to focus on film acting. And possibly Chicago if I decided to go the Second City route.

But it’s been 5 years. And I’m still here. Because I love it here. I don’t really want to leave. I’m happy in San Francisco, and being here has brought so many things out of me that I didn’t even know were there. When I moved here, I was a really serious person. Are you done laughing yet? Great. Well, I was. I had done a fair amount of Shakespeare and that’s what I wanted to keep doing. And then comedy happened, and now I have a completely different life and a completely different outlook on my own personal career. Which I think is GREAT. I’m happier right now than I ever have been in my entire life. I can actually say that. So then why the hell, when I see a girl I used to do stand up with, on Conan, do I feel these awful, sticky pangs in my heart-place?

Because it makes me question my choices, that’s why. If I would have moved when she moved, would I have had those types of opportunities? (NO, BECAUSE WE’RE NOT THE SAME PERSON.) If I had been properly focusing my efforts in one direction would I be more successful? (PROBABLY, BUT THEN I WOULDN’T BE DOING ALL THIS OTHER COOL SHIT EITHER, BRO.) Why am I answering all these questions myself? (BECAUSE I’VE ALWAYS KNOWN THE ANSWERS, I’M NOT AN IDIOT, I’M JUST A HUMAN BEING AND THE GRASS IS ALWAYS GREENER ON SOME OTHER ASSHOLE’S LAWN.)

Yesterday I spent the day acting in a film that comes out next year, which unbeknownst to me, had a bunch of pretty famous people in it. It was really cool, (I had a trailer and everything!) and I got to do some awesome stuff with some awesome people. My scene was just me and this guy that I spent a lot of time loving in the late nineties because he starred in one of my favorite TV shows. It was great. I got to elbow-rub with some people I hadn’t ever thought I’d be hanging out with. And odds are, my grass looked greener to somebody out there in the world. I was the asshole with the green grass! Yay! Had someone said that to me, I would have told them that it’s pointless to think that way, because we all have different paths to what defines success for us, and my life is my life and your life is yours. Take a look at your own damn grass, it’s got things that mine does not and vise versa. Look at those sweet lawn gnomes! 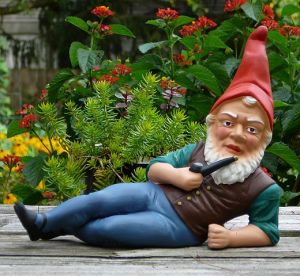 A gnome is jealous of no man.

I could up and move whenever I want. I don’t have kids, I’m not married (I do have a really cute boyfriend, though) so I could technically leave whenever I feel like it. I just don’t feel like I’m done achieving here. I haven’t yet conquered the things I wish to conquer, and perhaps I never will. And I like that I can participate in so many facets of the arts here. In the last year I’ve really been re-entering the world of straight theater that’s not just sketch comedy or stand up or improv – and I don’t want to give that up. Not that I’d have to in New York. Maybe I wouldn’t, what the hell do I know? But the point is that I just don’t think I’m done here yet. It’s a feeling I have that I just have to go with for now. It’s a strong feeling like that which brought me here in the first place. I had looked around Minnesota and said, “I’m done here. I feel I’ve done everything I can do, and there’s nothing left for me to achieve that will leave me feeling more fulfilled. It’s time to go.” But when I look around here, I don’t think that. Instead, I think “Look at the things that I’ve done, and I’m not even close to finished. San Francisco and I have more to offer each other and I’m still growing here. Ooooo, taco trucks!”

So when someone else gets that part you wanted, or gets married, or has their first baby, or gets a great job, or orders a better lunch than you – just remember that at some point, you’re going to have something they wish they had, too. They’re not gonna win ‘em all. No one can. No one should. It’s okay to admit that you’d like to have had something someone else has, but I think it should come with a side of knowing you’ve got something going, too. And if you don’t, then you better get to work. Oh, look, it just turned from jealousy to inspiration? How convenient.

Most days my grass is pretty green, sometimes I just get distracted looking at the other guy’s lawn, but that doesn’t make my grass any less worthwhile.

Who am I kidding? I don’t have a lawn, this is San Francisco.

You can find Allison “Ya Can’t Win ‘Em All” Page on twitter @allisonlynnpage and performing in The Age of Beauty at the Exit Studio August 1st – 17th.

4 comments on “Everything Is Already Something Week 11: The Grass is Always Greener (on Some Other Asshole’s Lawn)”