The Pint Sized Plays are coming up and will be here before we know it!

This year, the festival is being helmed by Neil Higgins, who is a frequent collaborator at Theater Pub, though this marks his first time stepping in as a producer. Perhaps more daunting than wearing a new hat, however, is that he’s taken up the reins from Julia Heitner, who is often credited with having truly innovated and refined Pint Sized in years past. We can’t imagine all this pressure makes for a good night’s sleep, but we also think if ever there was somebody who could do it- it’s Neil. 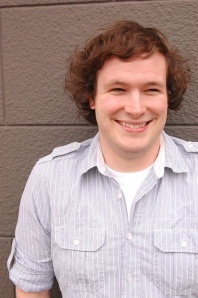 This is Neil’s “I will not accept defeat!” look.

So you’ve taken over Pint-Sized from Julia… how does it feel to fill those shoes?

It’s a lot of fun and very very daunting.  Julia was an absolute superstar when it came to producing Pint-Sized (among many other things), so I feel that I have some high expectations to meet.  But Julia has been so helpful by sending me all kinds of material to help me plan everything and by providing me with lots of encouragement.

What’s turned out to be the most challenging thing about putting this giant show together?

Between selecting scripts, picking directors and getting cast, it seems that getting all the pieces together seems to be the most challenging part.  Having participated last year, I know that once the ball gets rolling it’s a fun and relatively easy process.  It’s just a matter of finding the ball.

Was anything easier than you thought it would be?

So far it’s been a pretty smooth process.  My directors have been very timely and responsive, which has certainly helped out a lot.

What’s got you excited for the show this year? Any elements of the production or particular pieces you can’t wait to share with the audience?

I’m working with directors I’ve never worked with before (or met until very recently) and I’m really excited about that.  We also have writers that are first-timers for the festival and first-time writers, which is always exciting to see.

It’s becoming common knowledge that Theater Pub is leaving the Cafe Royale after the last night of Pint-Sized. Do you feel that will lend a special air to the festival this year?

It has definitely been on my mind.  The thought of producing a staple of the Theater Pub season, following in Julia’s footsteps and being responsible for the last show at Cafe Royale have all affected the conversations I’ve had with myself about the night (mostly in the vein of “This is so much pressure!  I want people to like it!”  “Get it together, girl!”).  People generally like to avoid negative feelings, but I hope that Pint-Sized is a little bitter-sweet for Theater Pub regulars because it’s such a beautiful, confusing emotion.

Will there be “last show surprises”?

I can neither confirm nor deny that accusation.

What do you hope will be the future of Pint Sized?

I hope Pint-Sized can find a home for next year.  Whether I produce it or not, I want this festival to keep going.  It’s much too fun and too wonderful a way to build and strengthen the theatre community for it to disappear.

Would you ever take this on again?

If you could have one thing, above all else, happen at this year’s festival, what would it be?

I’d love for someone to get engaged or give birth.  That would be marvelous.  I also (yes, I know, you said “one” thing) want everyone to have a before-undreamed-of amount of fun.

Don’t miss Pint Sized Plays IV, playing five nights this July 15, 16, 22, 29 and 30, always at 8 and always at the Cafe Royale. Admission is free, but get there early- we will be packed every night!