Actress and Theater Pub Artistic Director, Julia Heitner, talks about what it’s been like to bring Measure For Measure from the page, to the stage.

After 3 ½ weeks with just a few rehearsals per week, we’ll be performing an 80-min version of Measure for Measure starting tonight!

I am playing Isabella, a novice about to enter a nunnery, who gets pulled into the plot when her brother Claudio (played by Vince Rodriguez) is condemned to die for knocking up her homegirl, Julietta, and so she has to go save his ass. I love Isabella’s fierceness, eloquence, and that her particular character flaw is never being able to hold her tongue. I also relate to her being a sort of outsider in the play, left to fight her own battles, always speaking her mind (no matter what the consequences, and oh- the consequences!), and clinging to an outdated moral code in a modern world. Plus, I get to say things like,

Thy sin’s not accidental, but a trade.
Mercy to thee would prove itself a bawd:
‘Tis best thou diest quickly.

I am excited and extremely nervous to be performing in this role and intimidated to be in the company of such talented and hilarious actors.

We’ve been working hard, stress is high and after our tech/dress at Cafe Royale on Saturday, Sunday was our day of play. 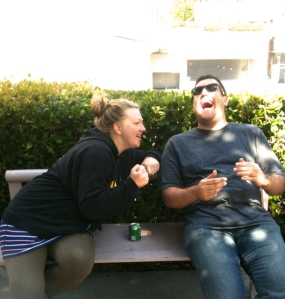 Kirsten Broadbear and Tony Cirimele sure do love to play!

It was an unexpectedly sunny and beautiful day in downtown San Francisco, so we took over a space near the Children’s Creativity Carousel in Yerba Buena and started a line through, which quickly turned into an innovative outdoor run-through, turning the area into our stage/playground. Most everyone wore sunglasses, which enhanced the severity of our Provost (Tony Cirimele) and Aeschylus (Carl Lucania) and added to the devilishness of Lucio (Neil Higgins) and Angelo (Nick Dickson). I tossed a shawl over my head to serve as a makeshift nun’s habit and we were off!

As usual, Carl Lucania is asking God why he continues to put up with our nonsense.

A few passersby gathered to watch us circle around a metal globe structure, scurry up and down stairways to the raised walkway above, and, of course, spout the beautiful and hilarious words of Shakespeare. In the final scene, as I let rip at Angelo and called him names, I felt a pang of shame when I screamed out that he was a “virgin violator” while groups of parents and their children wandered past. 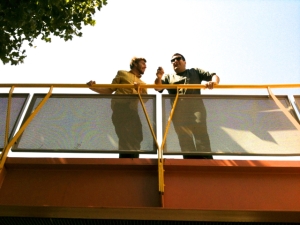 Passersby were even more baffled by Will Hand and Tony Cirimele talking about beheading people.

Favorite moments of the run-through include, the moment when Mistress Overdone (Linda Ruth Cardozo), no longer restrained by a tiny rehearsal venue, made a run for it when she was about to be arrested, forcing Escalus and the Provost to chase her down. Marianna (Kirsten Broadbear) put on some extra fabulous attitude as she revealed herself to Angelo during the play’s climactic face-off, and The Duke and Lucio engaged in an imaginary sunglasses-nose-pushing-clown-off.

I turned to Stuart in the middle of the final scene and said, “It’s a comedy!” and he sardonically replied, “FINALLY!” 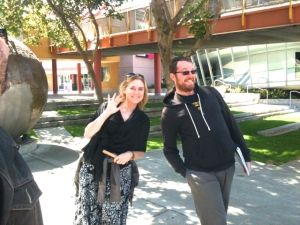 We can now take this show anywhere. All our costumes fit into one trunk. All the actors could squeeze into two cars.  We’ll need this flexibility when we hit up The Plough and Stars on August 22nd, when we have to dive into a space entirely different from Cafe Royale with no rehearsal time.

The Duke Vincentio Curse: when comforting someone just makes them cry harder.

Want to book us for your birthday party? We’re also available for Bachelorette parties! Your BART ride home? You’ll love it, I promise.