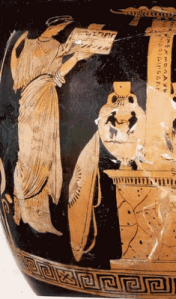 With the final two installments of THE THEBAN CHRONICLES coming next week, we approach the two most renown plays in the cycle. Aeschylus’ Seven Against Thebes, though largely overlooked by modern producers, was widely popular when it was written, winning first prize at the City Dionysia. But, even with all its success, the acclaim of Seven Against Thebes pales in comparison to that of the most recognizable title amongst the four plays: Antigone. Sophocles, the author of an estimated 123 plays (of which 7 survive in their complete form), was the most awarded playwright in ancient Greek history. Of the 30 competitions he participated in, historians believe he won 24 first prizes, and second prizes for the remaining 6. Antigone received such praise at the time of its writing that Sophocles was given a generalship and Aeschylus changed the ending of Seven Against Thebes so that it might lead more fluidly into Sophocles’ play. It seems fitting, therefore, that the two plays should be presented side by side on consecutive days.

In spite of its popularity, Antigone presents a distinct challenge to a director since most audiences are more familiar with Jean Anouilth’s famous anti-fascist adaptation, staged in Nazi occupied Paris in 1944 (the most commonly performed version today, but also one that takes great liberties with Sophocles’ original text). In Anouith’s story, there is more of a give-and-take between Antigone and Creon, and perhaps a murkier conclusion. Even those who believe they “know” the play may still find Tuesday’s reading beguilingly unexpected. Director Amy Clare Tasker has this to say:

“Of all four plays presented in this June’s offering of THE THEBAN CHRONICLES, Antigone is perhaps the most recognized – it is the play we have all read in school at one time or another, and we suffered through dry literary dissections of the role of government and religion in a civil society, and the chaos that ensues when man’s law transgresses the gods’ laws. I remember writing my first college essay on the nature of power and the difficulty of pinpointing a definition of the word on which Sophocles’ characters could all agree. Without diminishing the importance of this text as literature, I must confess that I laughed out loud re-reading the etymological findings of my 18-year-old self. What a drab world it would be without theater! Antigone is a compelling story, not a study. Here is this young woman, probably about age 15, who has lost everything. Her family is disgraced; her mother, father and two brothers have died in extreme circumstances. She has just returned from a year living in exile with her father while her younger sister Ismene (more of a bad-ass than we usually give her credit for) has been riding back and forth between the wanderers and the battlefields of Thebes with news for Oedipus. And when everything has finally hit the fan, Antigone has a choice to put the past behind her, marry her betrothed and become queen of Thebes.  Of all the crossroads that these Theban characters face, Antigone’s decision is perhaps the purest, strongest, most selfless, stubborn, and self-aware. Oedipus doesn’t know that Jocasta is his mother when he marries her, nor that Laius is his father when he slays him; Eteocles is a second son motivated by the shining scepter suddenly within his reach; Polyneices acts out of the entitled indignation of having lost the throne he had been groomed to inherit; Creon is a coward Ismene is too afraid to do anything at all, and all the other women simply commit suicide when the going gets too tough (sorry, did I spoil the ending?). Antigone embraces her fate with eyes wide open, knowing full well she will sacrifice her life for what she believes is right. She speaks her mind and stares down both king and executioner. (If only we had such female characters in the modern American Theater!)

I hope you’ll join the Theater Pub on Tuesday, June 29 to enjoy the final chapter of this compelling story – then stay and have a drink with us before you head back to the lecture hall.”

THE THEBAN CHRONICLES continues next week with Aeschylus’ Seven Against Thebes, directed by Sara Judge, and Sophocles’ Antigone directed by Amy Clare Tasker, perform June 28 and 29 respectively. All shows begin at 8pm, and are free to attend.